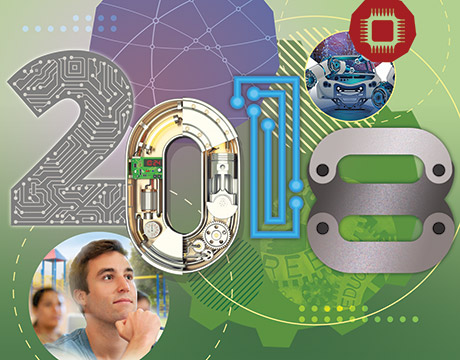 The Best Engineering Stories of 2018

Socially and politically, 2018 was a year of volatility. Technologically, engineers and scientists kept a lower profile, while mothering a host of advancements across a number of disciplines, from biomedical to energy to robots. All were aided by the growing momentum in 3D printing and advanced manufacturing, tools that are seeping into almost every industry.

Technology is advancing at a rapid speed and engineers need to do the same to compete and advance. These changes require greater collaboration between engineering disciplines and non-engineering professionals. Soft skills are critical. Effective communication among team members and outside stakeholders is essential. But training is needed even more to master technology and ensure business success, for both newly hired engineers and those with experience.

These themes were explored throughout 2018 on ASME.org. Here are some of the articles that touched on those themes and were widely read by viewers.

At the core of the research, industrial and technological breakthroughs we wrote about are skills engineers need to practice and grow personally and in business. Today, those skills need to be nurtured and developed from the start of a career to the end. Engineers excel at solving problems, but developing soft skills to enhance their careers isn't always a top priority, as discussed in 12 Skills You Need to Advance an Engineering Career. Scoring an interview means you have the technical chops. After that, it's all about marketing yourself, asking the right questions, making good connections, and choosing the paths that lead toward career goals. Without those, you're just another number in a large crowd of engineers.

Engineers familiar with multiple disciplines will be better prepared to work with today’s product development teams, according to a survey by research firm Tech Clarity. But nearly 40 percent of manufacturers polled said the evolving and changing engineering skillsets needed for systems-driven product development is one of the biggest workforce challenges. We covered many of those trends during 2018.

New Skills for the World of Engineering, for example, explored the challenges companies face while developing new skills for engineers and engineers who may lack support in learning them. “Surveys and articles dot the Internet about the need for continued training, but examples of companies that put that into place are rare,” the report stated. One industry executive posed the question: “What happens if I train my employees and then they leave because they get a better offer? I answer, ‘What happens if you don’t train them and they stay?”

Increasingly, training involves design and 3D printing. It captures most industries but is perhaps best manifested in How Industry 4.0 Impacts Engineering Design. Industry 4.0 is a combination of digital processes such as the Internet of Things, automation, robotics, and additive manufacturing and how they have a disruptive impact on mechanical engineering design. Not only do engineers need to redesign processes and operations to accommodate these new advances, Industry 4.0 impacts how they design products for increasingly smart manufacturing facilities.

4D printing is one of the next major technologies on the horizon. Georgia Tech researchers, showcased in the story 4D Printing Advances Additive Manufacturing, built a powerful 4D printer that quickly and efficiently creates self-assembling 4D structures. It combines four different printing technologies: aerosol, inkjet, direct ink write, and fused deposition modeling. It can also make products from a variety of materials, including hydrogels, conductive inks, elastomers, and shape memory polymers, which can be programmed to "remember" a shape and then transform into it when heated to a certain temperature.

Artificial intelligence is another combination of technologies quickly being integrated into a variety of systems, bringing the reality of radical change to many industries. As we reported in Artificial Intelligence Transforms Manufacturing, Stanford researcher Andrew Ng says AI will perform manufacturing, quality control, shorten design time, reduce materials waste, improve production reuse, and perform predictive maintenance. Going beyond that, the story describes a two-armed robot that can manufacture products without having to be programed.

Robotic development is also taking many forms to perform many different tasks. From bees to snakes to cockroaches, engineers are incorporating biomimetics into robots that run, crawl, and slither. Snakebots, in Snake Robots Crawl to the Rescue, may be used in natural disaster rescue situations. Early bots used snakelike motions such as sidewinding and lateral undulation. Advances in actuators, motion planning algorithms, force feedback, and modularity are now taking snake robots to a higher level of complexity and functionality.

As robots develop, our attitudes and perceptions of and toward them seem to reflect personal biases and prejudices. The human tendency to identify and stereotype along racial lines seems to be expanding to robots. Racism Runs Deep, Even Among Robots discusses a New Zealand study that looks at the role a robot’s “skin” color plays in how humans interact and respond to them. Not surprisingly, the researchers found that people project their own biases on robots. Perhaps more surprisingly, robots are learning negative biases toward humans through the use of artificial intelligence, algorithms, and data input.

Bioengineers in 2018 had an even larger impact on healthcare than previous years. Tufts University researchers developed “smart” bandages that actively monitor and deliver precisely targeted treatment to chronic wounds. You can read in Smart Bandage Does It All how they track markers such as pH, temperature, oxygenation, and electronically deliver drugs to treat the wound. The bandages rely on a combination of sensors, micro-heaters, and wireless electronics, further underscoring the need for cross-disciplinary engineering skills to make an idea into reality.

We highlight how sensors were put to another unique use in Mini Sensor Detects and Measures What We Eat. The story describes sensors that mount on a tooth and track what a person eats in real time. The data is transmitted to a digital device to help healthcare practitioners find links between what people eat and their health.

The same technology found its way into energy. As an example, industry is now using artificial intelligence to develop a smart, autonomous grid. The Grid Resilience and Intelligence Project is a $6-million U.S. Department of Energy effort and one of seven projects affecting grid resiliency. Using AI to Manage the Grid talks about the first federal effort to use artificial intelligence and machine learning to improve grid resiliency. The first step is creating algorithms and tools to gather and digest data from satellite imagery and other sources to build a body of knowledge on how distribution systems work and where they are vulnerable.

Renewable energy sources continue to grow, and their effect on the grid has utility executives looking to storage options as a tool for managing the load. Batteries are beginning to be incorporated into systems in California, Texas, and elsewhere. In Germany, a more traditional energy storage project opened with a twist.

You can read about it in Energy Storage Moves to New Heights, which describes an innovative pumped storage project in Germany that incorporates the world’s tallest wind turbine. It and three other wind machines are built on concrete foundations that double as water storage reservoirs for a connected 16-MW hydropower project. Height matters because annual energy yield increases one-half to one percent for each meter of height.

A wide variety of other developments and projects that became reality in 2018 can be found in ASME.org. Their successors are poised for 2019.