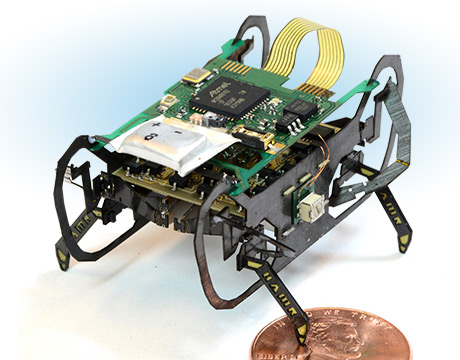 Cockroaches always seem to find a way to survive, no matter the situation they face. Inspired by that perseverance and ingenuity, engineers at Harvard University’s Wyss Institute decided to base an aquatic microrobot on the insects’ ability to overcome most odds.

Many microrobots can either walk or fly, but this tiny bot can also land and walk on water, and even dive below its surface, much like a roach

The addition of aquatic features to Harvard’s Ambulatory Microrobot—also called HAMR—adds a new dimension to how microrobots can be used in search-and-rescue operations and other dangerous or complex applications. The highly publicized rescue of a youth sports team in Thailand earlier this year is just one recent example of the difficulty of working in amphibious environments.

Harvard’s cockroach-inspired microrobot is an early prototype of bots that could help in such operations. “In case of a storm or tsunami, we need robots to work both on the surface and underwater,” said Kevin Chen, a fellow at Harvard and part of the team that developed the robot.

Read More: The Moral Beauty of a Disobedient Robot

The HAMR has been under development for close to a decade, but its ability to swim or dive is relatively new. The robot may be inspired by cockroaches, but its ability to walk on water was patterned on the diving beetle, which has flaps and legs working in tandem to generate locomotion. The robotic motion resembles paddling, with the ability to move in any direction, sink, or walk on land.

One of the team’s major goals was to reduce the number of actuators used in the bots. Those parts are fine in large robots but present a major limitation in microrobots.

“In actual robots, actuators act like muscles but they are denser,” Chen said. “Microrobots don’t have the density or power capability.” To replace the actuators, the team connected the flaps and legs with a passive joint, which helps define the motion of the leg.

When moving across water, the microrobot slows down its leg movement to generate the best possible motion. The kinematic outcome is similar to that of a diving beetle’s active flaps, Chen said. When the microrobot gets on the ground, the flaps turn inactive and the leg movement intensifies.

Another challenge the roboticists faced was finding the right water-resistant material for the bot. During their experiments, the researchers insulated components such as wires and the control board with a coat of Parylene, a polymer. They are now exploring other materials, like Teflon, to improve water resistance.

The team still has to improve the roachbot’s power, control and sensing mechanisms before it’s ready for real-life rescue missions, which won’t be for about five years, Chen said.

“In emergencies, hopefully we can send in a swarm of these and search for survivors,” he said. “We need microrobots to navigate complex environments.”

Listen to Episode 2 of ASME TechCast: How Engineers Close Communication Gaps with Non-engineers

In emergencies, hopefully we can send in a swarm of these and search for survivors.Kevin Chen, Harvard University