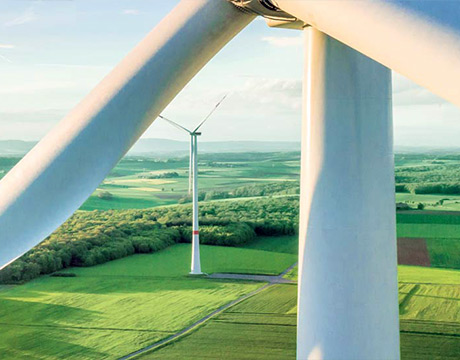 The world’s tallest wind turbine rises 246.5 meters on the rolling Limpburg Hills that frame the small town of Gaildorf, Germany. But it is not height alone that marks the 3.4-MW turbine and three identical machines that combine to form the wind farm. The towers are built on concrete foundations that double as upper reservoirs for a connected 16-MW pumped storage hydropower project that provides energy storage for the unique project.

Designed, built, owned, and operated by German developer Max Bögl Wind AG, the project aims to provide a solution to intermittent power generation of wind turbines. Renewable energy—largely solar and wind—is growing as it becomes more competitive with fossil fuel and driven by government mandate. In Germany, the government wants to increase the share of renewable power sources to 50% nationally. But it presents problems with integrating into the electrical grid because power is often generated when electrical demand is low, or generation decreases when the winds die down. 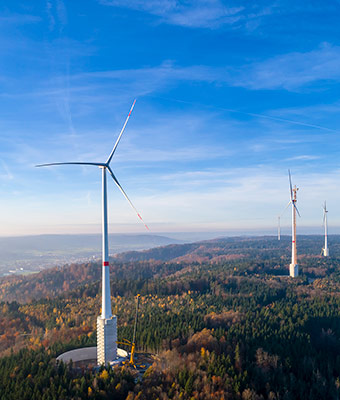 Pumped storage is a proven method to store energy for a later use. When production exceeds demand, water is pumped to the upper reservoir. During times of peak demand, it flows downhill to power turbines at the lower reservoir. At Gaildorf, the wind turbines will provide the power for pumping when demand is low. The combination is the first of its kind, says Susanne Kleineheismann, international representative for Max Bögl. The company calls the system a “water battery.”

“We wanted a solution for decentralized energy storage,” she says. “Gaildorf was suitable due to the area with high wind velocity. This solution also needs 150 meters of water height [for hydro].”

At Gaildorf, the company used its design of a concrete-steel hybrid tower it says is more economical at great heights. The four towers are built on hills rising 200 meters above a river valley, but the working height is increased further because they are founded on the 40-meter-tall concrete reservoir tanks that measure 16.8-meter-diameter. The combined height of the tallest tower is 246.5 meters, with a hub height of 178 meters and a 137-meter rotor diameter. Each of the four GE turbines is rated at 3.4 MW.

Height matters because annual energy yield increases by one-half to one percent for each meter of height, Kleineheismann says.

Please see Part Two of “Energy Storage Moves to New Heights” to learn more about how the turbine systems are made and how they operate.