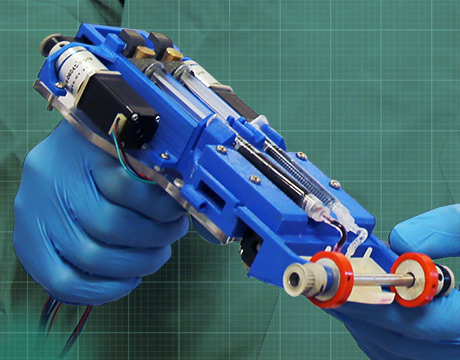 Researchers have created the first handheld ‘skin printer’ that forms tissues in situ for application to wounds. Printer image: Liz Do / University of Toronto

In the medical industry, so-called “deep wounds” can be complicated in terms of the cost to the patient and facility, as well as in terms of the size of the equipment needed to treat them. But what if that equipment could be simplified to the point that it could be held in the palm of a hand? A University of Toronto team is at work on a handheld 3D skin printer, weighing less than a kilogram, that could provide a revolutionary change to the field.

“We had a student in 2012 who developed an approach to making hydrogel sheets using a microfluidic device,” says Axel Guenther, associate professor in the department of mechanical and industrial engineering at the University of Toronto. “They were free-flowing sheets we prepared with a crystalline solution. Ultimately there was collaboration with a local burn surgeon and we realized from research that we could stick skin cells onto sheets. We could prepare them but transferring them onto a wound was quite challenging, particularly for the larger substrates inherently relevant for burns.”

For You: Student-Designed Heart Pump Is Lighter Than the Rest

He says a limitation of conventional printers is actually the fundamental process of printing skin in of itself. “It’s challenging when you have a large living organism that’s breathing [like skin],” he says. “It’s not easy to make it work with an inherently moving object [like a printer].”

It’s challenging when you have a large living organism that’s breathing [like skin]. It’s not easy to make it work with an inherently moving object [like a printer].Prof. Axel Guenther, University of Toronto

The new process and printer the team has developed could lead to a better wound healing process than the typical grafting process used today, Guenther says, adding that they came to the conclusion that forming the skin substitute right above the wounds was the best approach, so that manual manipulation of the bio ink wouldn’t be necessary.

“The technology we’re using now is a duct tape dispenser where the tape is not a pre-rolled type of synthetic tape but a tissue tape deposited right above a wound band,” he says. “The handheld unit has onboard syringe pumps, and parts of the printer are manufactured with sterilized plastics and surgical steel. And a stepper motor drives the printer at a controlled speed. The consumable is the printer itself, which is a microfluidic device.”

The portability of the printer means treating more patients in more places as well, with minimal operator training required. The device also eliminates the washing and incubation stagesthat must occur in many conventional bioprinters.

The bio ink, or “skin,” used by the printer contains collagen and fibrin across the entire sheet, so the composition of that tissue within the layer that is applied to the natural skin is controlled by the microscale channel architecture, he says. The fibrin in the printed skin can also act as a strong catalyst in wound healing, helping the printed skin adhere to the natural cells, effectively acting as a sealant, he says.

“The bio ink is supplied by a polymer that contains cells,” he says. “On contact with a crosslinker or upon experiencing a temperature change, the biopolymer is converted into a gel and these are materials commonly used in medicine for creating tissues.”

The speed at which the material is deposited has the printer moving at a rate of about onecentimeter per second. However, there is still work to be done on the bio ink.

“Skin is composite material, squishy, but it also has collagen in it,” says Guenther. ‘It gives it structural integrity and that’s something we currently can’t say we deliver. We are planning to have composite bio inks over time that represent the full range of tensile properties.”