Snakes move rapidly through unstructured environments and avoid obstacles by going around or over them, or through small holes in the obstacle, such as a rock pile. For years, engineers have studied the remarkable locomotion capabilities of snakes to make snake-like robots that move in similar ways.

Snake robots or “snakebots” are especially valuable in search-and-rescue operations. They come in a variety of shapes and sizes, ranging from 20-30-foot-long snakebots that work on the ocean floor to tiny medical snakebots used inside the human body for surgical procedures. 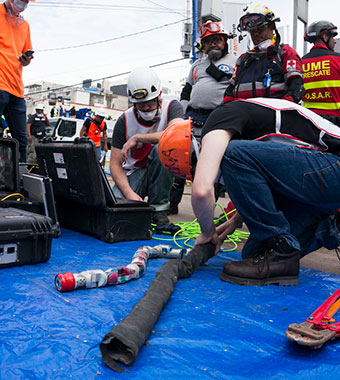 Traditional snakebots move using snake-like motions such as sidewinding and lateral undulation. But the next-generation snakebots are more modular in design, consisting of a series of independent modules that are connected and programmed to work together. This redundancy allows them to continue to function even if several modules are destroyed.

For You: The latest in mechatronics from ASME.org

When the robot goes over bumpy terrain, the series elastic actuators allow us to not perfectly plan the footsteps, but rather let the robot automatically conform to the environment the way animals do.Prof. Howie Choset, Carnegie Mellon University

Carnegie Mellon University’s Robotics Institute is considered by many to be the home of snake robot design and development. CMU engineers have made advances in force-sensing technology so the robot can determine how tightly it needs to wrap around an object in order to cling on—eliminating the need to preprogram the robot based on “best-guess” conditions of its operational environment.

These robots are of modular design, where segments or modules can be added or subtracted to change its length. Each module is a series-elastic actuator packed with sensors that enable controllable position, velocity, and sensitive torque control, as well as three axis inertial measurement. With six legs connected to a rectangular body, CMU’s “Snake Monster” robot is actually not a snake. The legs, however, move with snake-like action. The actuators measure and regulate the force it exerts, as well as the forces upon it.

“The joints in the leg 'feel' the force of the robot being pushed and then, in an effort to zero-out the force it feels, the robot walks in the direction it is being pushed," says CMU professor of robotics Howie Choset. The force feedback allows for very simple controls that can adapt to a wide range of terrains. "When the robot goes over bumpy terrain, the series elastic actuators allow us to not perfectly plan the footsteps, but rather let the robot automatically conform to the environment the way animals do," he says.

Part 2 of “Snake Robots Crawl to the Rescue” uncovers the type of robosnakes slithering out of Stanford University and Worcester Polytechnic Institute.

Read More:
Take a Spin and a Splash on the Hydro Bike
The Chain Gang
MRI-Safe Robots Treat Epilepsy