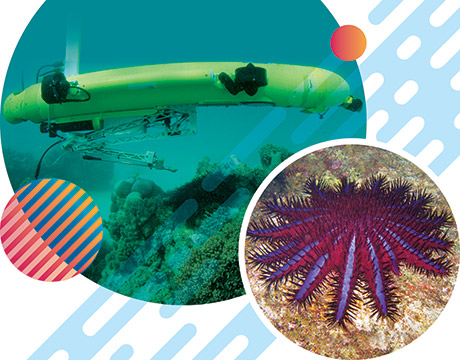 COTSBot employs a machine-learning system trained on images of the crown of thorns starfish. Image: Queensland University of Technology

Through the azure waters of the Great Barrier Reef off the coast of Australia, slowly glides a killer. Its body, tubular and yellow, about a meter in length, hovers over its victim, unsuspectingly sprawling atop a coral formation. Once it zeroes-in on the target, the killer pauses briefly—and then dives down quickly, striking the prey with its protruding stinger like some sort of underwater wasp.

Within a few hours, the injected poison takes hold, not only killing the victim but also causing it to fall apart limb by limb by limb.

The killer is neither an insect nor a rare marine monster. It’s not even a living thing.

It is instead an autonomous underwater robot equipped with artificial intelligence software, built by Matthew Dunbabin and Feras Dayoub, who study and build autonomous systems at the Institute for Future Environments at Queensland University of Technology in Brisbane, Australia.

Dunbabin and Dayoub built it to help fight one of the biggest marine disasters in progress—an outbreak of crown-of-thorns starfish, the voracious coral-eating organisms that are decimating the Great Barrier Reef faster than that it can rebuild itself.

You can think of it as a Starfish Terminator robot, although its creators opted for COTSBot, a name derived from the acronym for the crown-of-thorns starfish: COTS.

Having a few COTS feasting on a large coral reef isn’t a bad thing—they are natural inhabitants of the sea and keep fast-growing corals at bay so that the slower species can flourish, too.

One COTS feeding on 2.5 acres of coral, or about 1.5 football fields, won't do much damage. Fifteen COTS feeding in the same space is considered unsustainable.

During outbreaks, an acre can have double and triple that, and even more, says Ciemon Frank Caballes who studies COTS ecology at James Cook University in Townsville, Australia. “You can have a carpet full of COTS covering the reef,” he said. “We have seen that on the Great Barrier Reef over the years.”

The consequences are severe. About 40 percent of all coral loss on the Great Barrier Reef over the past 30 years is due to crown-of-thorns starfish. The exact reasons for outbreaks are still debated, but there are several theories. They could be triggered by agricultural runoffs that fuel algae blooms, which starfish larvae feed on. Or they could be caused by the lack of COTS predators, which humans have overfished over the years.

It could also be that COTS are simply excellent breeders. “Each creature can lay 65 thousand eggs,” Dunbabin said. “And you need a really small number of eggs fertilized to create a really big problem.”

The Australian government employs a team of 15 divers who scout for COTS on the reef and inject them with poison to keep the numbers down. The reef, however, stretches for about 1,500 miles and covers much more area than the British Isles, far more than the divers could ever hope to reach.

COTSBot can stay underwater for up to eight hours at a time and can search and destroy in the dark, which is an advantage because starfish are nocturnal creatures and actively feed at night. The robot can carry two liters of poison, enough for 200 lethal injections.

The team doesn’t think COTSBot will replace human divers, but rather work alongside them. “There are limitations in terms of depth and how long divers can stay in the water,” Caballes said. “That’s where the robot has a very good potential.”

The bot also has a slightly different modus operandi than humans—for example it doesn’t wander about like divers, but scouts within a set area and moves in straight lines.

“We’re not trying to replace the current method, but rather facilitate upscaling of the current tools,” Dunbabin explained.

COTSBot has undergone a number of changes since Dunbabin began working on the project in the early 2000s. Back then, destroying a starfish required injecting poison into each of its arms, and the spiky, sprawling crown of thorns starfish has 20. It was a job too complex for an unmanned underwater vehicle, so initially, the robot’s role was surveillance, spotting the starfish and reporting their location to human divers.

Dunbabin’s early detection algorithm identified crown-of-thorns starfish by their spiky texture. The bot reached about 65 percent accuracy, but improving on that was difficult. Some corals are themselves spiky, and COTS often nestle in between corals.

So Dunbabin and Dayoub switched tactics, looking for shape, structure, and color instead. Dayoub gathered hundreds of starfish pictures from YouTube and other sites, and used machine learning techniques to teach the robot to recognize the culprit. That was a bit tricky too. Most COTS pictures were starfish “glamor shots” aimed to draw tourists rather than terminator bots. The team needed shots of real starfish in their natural settings.

“We put GoPro on the divers’ equipment and got a huge number of images that way,” Dunbabin said. “It was really valuable data.”

While the machine learning system was boning up on starfish identification, there was a breakthrough in the COTS killing method. Researchers at James Cook University found that starfish are allergic to bile, a substance that humans and all vertebras produce as part of their digestion to break down fat. COTS are so allergic, in fact, that one injection of bile was enough to make the starfish fall apart—quite literally.

Rather than developing a simple robotic spotter, researchers realized they could create a complete killing system: equipped with a pneumatic injection system, the robot could not only detect but also terminate the starfish.

Testing the detection and termination systems was easier said than done. COTS’ venomous spikes can produce harmful stings, so tossing a few of them into a tank for prototypes to take stabs at wasn’t a safe option.

Instead, the team 3D-printed a bunch of imitation starfish, based on a few live specimens observed in a local museum, and set up a fake reef covered with starfish on the lab’s floor. The robot sat on a stand, with its camera looking down, and signaled to the team where it wanted to move next.

Eventually, however, the machine learning tool was so adept at identifying real starfish that it rejected the 3D models as too fake to bother with. The team had to up its game. Instead of 3D-printed models, they covered the floor with stickers of the starfish photographs taken by the divers’ GoPros. Those photos included not only easy-to-see starfish lounging on top of corals but also ones embedded so deeply that it wasn’t worth trying to inject them. (If the bot missed and got its needle lodged in the corals, divers would have to be dispatched to extract it.)

That worked much better, aside from some slight property damage, Dunbabin said. “If I wasn’t careful and I had the injection system too low, it was injecting right through the vinyl,” he chuckled. “We put a lot of holes into our floor!”

After some additional testing in the sheltered waters of Moreton Bay near Brisbane, COTSBot was ready for the Great Barrier Reef.

Reach Out and Jab

In the water, the COTSBot glides along the reef, scanning in search of starfish to terminate. The robot has to maintain a fairly narrow band of distances above the tops of the coral: get too close to the reef and the optical system loses focus, go too high and the pixels bleed together so that the vision system can’t distinguish between coral and starfish. The optimum distance, the researchers learned, was 1.1 m above the top of the reef.

There was one problem: the COTSBot’s injection system can only extend 900 mm, or 0.9 m, from the body of the robot. What the robot can see, it can’t reach. What it can reach, it can’t see clearly.

To get around that limitation, the team programed COTSBot to perform a drop down sting move.

“Once it detects the starfish, it will drop to the 900 millimeters, fire the injection system to hit the starfish, retract, and go back up to the flying altitude,” Dunbabin said. The maneuver takes about five seconds from start to finish.

“If we were flying at 900 millimeters all the time, we'd have a big chance of hitting coral and getting stuck,” Dunbabin said. “That little bit of extra space is the safety margin we need. And it improves the vision.”

By now, COTSBot has a 99 percent accuracy rate, having done several hundred runs—usually about 20 runs per day, injecting many starfish. But one starfish terminator isn’t really going to make a difference against thousands and millions starfish chewing at the reef. It’s going to take a fleet of robots. That’s where cost becomes a factor, the team says.

Dunbabin is a bit hesitant to reveal COTSBot’s current price tag—he doesn’t want to scare off potential funders. But, he adds, the cost is about to drop down significantly. The next generation COTSBot will be about eight times cheaper. The team is actively working on that model, dubbed RangerBot, right now. The goal is to produce the bots for between $5,000 and $10,000 each.

The price drop is possible because the team realized COTSBot could function without a key—but expensive—piece of equipment. The robot has been using acoustic sensors to measure velocity relative to the seabed. Sonar systems, which have traditionally been used underwater instead of cameras because of poor lighting, cost about at $35,000 each. But the water in the Great Barrier Reef is clear enough that cameras work just fine.

Read More on Engineers Inspired by Animals: How Elephants Use Their Tails to Chase Away Mosquitoes

“With vision we are looking at the seabed and we estimate how far we moved along that seabed, and we can tell how far away objects are, how far we've travelled and at what speed,” Dunbabin said. “We replaced the functionality from acoustic to vision and we got surprisingly good results.”

Equipped with six thrusters, two stereo camera systems used for navigation and detection, RangerBot will be smaller, more maneuverable, and hopefully affordable enough to build a fleet. The idea is that RangerBots would rid the reef of as many easy-to-reach COTS as possible, and then the divers would pull other starfish out of crevices with hooks and finish them off manually.

Once it detects the starfish, it will drop to the 900 millimeters, fire the injection system to hit the starfish, retract, and go back up to the flying altitude.Matthew Dunbabin, Institute for Future Environments, Queensland University of Technology