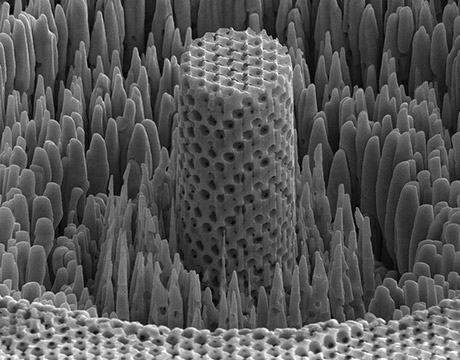 A microscopic sample of the researchers’ “metallic wood.” Its porous structure is responsible for its high strength-to-weight ratio, and makes it more akin to natural materials, like

Economist E.F. Schumacher made his mark in the 1970s touting the idea that "Small is Beautiful." A new generation of materials scientists is now telling us that "smaller is stronger." Researchers at the University of Pennsylvania have used this principle to create a foam metal made of nickel that one of its innovators, James Pikul of the Department of Mechanical Engineering and Applied Mechanics, calls "metallic wood."

The new work is based on that of Dr. Afsaneh Rabiei at North Carolina State University, who developed composite metal foams where the metal particles are regularly arranged in a matrix, giving it impressive strength, despite consisting largely of air. Suggested applications for these metal foams range from vehicle bumpers to bullet-proof vests.

The Penn engineers took the metal foam idea one step further, by going smaller and controlling the size of tiny nickel pillars within the material. Instead of packing metal spheres, the team formed a foam from closely stacked plastic spheres, each around 17 nm in diameter. They electro-deposit nickel into the template and dissolved the plastic, leaving only the nickel pillars behind. The metal forms a very strong, well-organized porous matrix.

The self-assembly process “allows us to have very, very fine nanoscale control over the feature sizes,” Pikul said.

The goal was to take advantage of the fact that the metals we produce and use today, as strong as they are, have only roughly 10 percent of the strength that they could theoretically have, based on the strength of the bonds between atoms within the metal. However, new foam-type metals come much closer to achieving the theoretical maximum strength.

The Penn team has produced square sheets of this material, roughly 1 cm per side and a few hundred micrometers thick, which is a sample big enough to test for macro mechanical properties and study fracture mechanics. According to Pikul, the tiny pillars have a yield strength of eight to 10 GPa, which is roughly ten times what is typically found in metals. Register today for ASME’s Offshore Wind Summit

The microscale foams are strong “because as you decrease the strut size, you get rid of some of the defects that migrate to the surfaces, which changes the deformation mechanism in the strut, causing it to approach the theoretical strength of the metals,” Pikul said.

The material’s density compares to that of water, which avoids the issue found in other superlight materials with high specific strength but with volume fractions too low to be of much practical use.

The porous nature of the material lends itself to certain applications. Pikul has produced batteries with very high power densities using a very similar material and filling the pores with electrolyte. Another application can include things like micro-electromechanical systems (MEMS) that could take advantage of the material's combination of flexibility and strength.

Metallic wood might also be used for protective cases for high value items like mobile phones. Other researchers are exploring graphene for use in similar applications. "Each material will have their niche," Pikul said, adding that applications are endless since technologists have centuries of experience working with metals.

Pikul said that self-assembly is the way that nature builds things and calls this development bio-inspired. Self-assembly also makes scaling up easier.

“If you do this self-assembly with thousands or tens of thousands or millions of particles, then you can do this over large scales,” Pikul said.

While still more work must be done, Pikul can envision producing the material in quantity on a roll-to-roll type of process. Big Webinar:How to Design a Wind Turbine in 25 Minutes R.P. Siegel, P.E., is a writer based in Rochester, N.Y.

As you decrease the strut size, you get rid of some of the defects that migrate to the surfaces, which changes the deformation mechanism in the strut, causing it to approach the theoretical strength of the metals.James Pikul, University of Pennsylvania