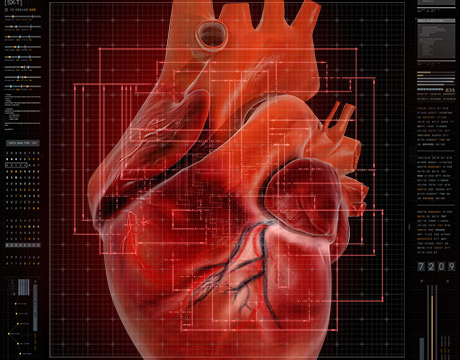 To an engineer, the heart is an electromechanical pump that can keep going for 80 or more years without needing a single repair.

“I can’t think of any human-made device, be it a valve, a pump or anything, that can do that without breaking down,” said Ajit Yoganathan, associate chair for translational research and director-founder of the Cardiovascular Fluid Mechanics Lab at the Wallace H. Coulter Department of Biomedical Engineering partnership of Georgia Tech and Emory University.

Engineers at his lab, recognized as pioneering in studying the function and mechanics of heart valves and other complex cardiac defects, and others at Coulter are playing a key role by applying engineering methods to detect and fix heart issues.

During a heart attack, blood flow is blocked to part of the heart, damaging the tissue. The scarred tissue then lacks mechanical integrity and could inflate and rupture. During the attack blood vessels that feed the heart’s outer tissue with a regenerative protein called FSTL1 are destroyed.

Some patients don’t respond well to current treatments so a team began seeking another way to encourage healing. They learned that no new cells were needed if they could replace the depleted FSTL1 protein, which encourages regeneration. Led by Vahid Serpooshan, an assistant professor at Coulter, the team developed a collagen patch that is stitched to the heart covering an area a little larger than the dead tissue. It not only structurally shores up the weak tissue but also has an FSTL1 component that is released over time. In order for the technique to further boost production of cells and stimulate healing, the patch needed to emulate the force dynamics of embryonic heart tissue.

Some 350,000 electronic pacemakers are implanted in the U.S. each year to treat arrhythmias, or irregular heartbeat. Although the battery-powered small generators work reasonably well, the procedures to implant and readjust them are invasive. The devices have wires that lead through a blood vessel to give the heart electric impulses. Occasionally, a part fails, which again requires surgery. In babies and children repeated surgeries also are necessary to make adjustments as they grow.

Researchers have developed a biological pacemaker, a device nearly identical to the heart’s natural pacemaker nodes, using a minimally invasive injection of messenger ribonucleic acid (mRNA) through a cardiac catheter. The mRNA, a family of molecules that conveys genetic information, converts ordinary heart muscle cells into pacemaker cells. One key member of the team, engineer Phil Santangelo, developed the RNA solution as part of his work building RNA solution treatments for disease. His contributions stem from developing and engineering new molecular imaging technology, in this instance, a single molecule-sensitive probe for imaging ribonucleic acid (RNA) molecules.

This is an important milestone indicating the usefulness and safeness of engineered RNA solutions.

Babies born without a left side of the heart must have surgery immediately and then two more in the next three years to re-route all their blood through the right side of their heart. The initial goal is to keep a child alive until a transplant heart is available, which is much scarcer for children than adults.

The surgeries put even more stress on the only ventricle, so a solution was sought to be able to improve heart tissue until the transplant. A research team believed that stem cell therapy might be a solution since therapy for children with congenital heart defects has been advancing. But identifying which stem cells carrying microRNAs (the molecules that convey genetic information) work best in improving heart tissue was a challenge because there are thousands of them.

Georgia Tech’s Manu Platt used data mining to computationally determine the stem cells with the best potential, narrowing the options down to a few dozen to make the selection easier. Platt’s lab brings together engineering, cell biology and physiology to understand the impact and response of cells related to their mechanical and biochemical environments for repair and regeneration in health and disease and then contributes that knowledge to the health care community.

The researchers also found that strategically depriving the cells of oxygen resulted in the most robust response from heart tissue cells into which they were injected. The team is also developing a heart patch with stem cells to treat adults who had heart attacks that could make it available for children, too.

Related: The Engineering Behind Brain Research

Patients with atrial fibrillation (a-fib), the most common arrythmia, often chronic, are frequently treated with a drug in use since the 1980s. Although it’s the most effective therapy to date, the drug can be toxic to the liver, lungs, and thyroid.

Researchers began to think if they could target the effective drug specifically to the heart that it may not be so harmful to other organs. Their idea was to apply a hydrogel containing the drug onto the outside of the affected area. One of the biggest challenges the team faced was embedding the drug in a gel because hydrogels are made mostly of water, and the drug is hydrophobic. To resolve that, the drug was clustered in large chunks and a mesh made tight enough to hold them. The drug slowly breaks up and enters the tissue. The gel then bio-decays.

The engineered gel is inserted via a catheter through a small incision in a procedure requiring only a local anesthetic. Once inserted, the catheter curls into a circle. The nano-hydrogel is squirted inside the circle where it sets and forms a patch. After the patch solidifies, the catheter straightens out and is removed from the patient. Researchers believe this localized approach could open the door as a treatment strategy for other cardiovascular diseases.

Big Webinar: How to Design a Wind Turbine in 25 Minutes

For sufferers of congestive heart failure, whose hearts just don’t pump enough blood, fluid backs up in the lungs, extremities, and other parts of the body. The exact amount of medication is critical in helping the patient.

Currently, frequent hospitalization is required for patient observation, which is costly, inconvenient, and disruptive. A team led by Omer Inan, associate professor at Georgia Tech, developed a wearable device that monitors vibrations from the heart and helps doctors advise patients on dosing. “It’s like measuring a tiny earthquake in your chest,” Inan said.

The device works in conjunction with a smartphone app that collects data while the patient does a six-minute walking task. The combined data can indicate whether the patient’s condition has declined, and a doctor can adjust medication over the phone, eliminating the need for hospitalization and observation.

The best diagnostic tool for early detection of coronary artery disease is a coronary angiogram, but it’s costly and invasive. CT scans are many times less costly and non-invasive and can even serve to pre-screen whether an angiogram is necessary at all. But there is a drawback: Since the heart is almost always in motion, it may take several attempts to get a good CT image, which exposes the patient to three times as much radiation as an angiogram. Even using electrocardiograms is not enough to pinpoint the exact time to capture the image.

Researchers used another tool, an accelerometer placed on the patient’s chest during the CT, to detect the split second when the heart is motionless between beats. The device measures the vibrations of valves opening and closing and the resulting seismographic data makes the timing much more precise. This allows the technologist to snap the image at just the right moment. The key is coordinating the ECG and the vibrational pattern from the accelerometer, a software solution, to hit the right split second to trigger the CT scanner.