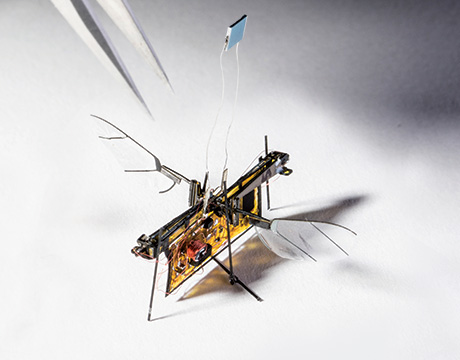 Insect-sized flying robots are cheap to make and can easily slip into tight spaces inaccessible to big drones. Image: Mark Stone/University of Washington

Houseflies are a nuisance, and the first instinct is to swat them away. For researchers at the University of Washington in Seattle, flies and other flying critters were the muse in a robotic breakthrough.

The researchers developed RoboFly, an insect-scale microbot with wings that can lift off the ground on its own, without a battery or being wired to a power supply on a desk. It is the first flying robot of its kind to launch without batteries.

“This is the first time a robot of this size and weight can lift off the ground without wires. It has got wings, circuits and everything,” said Vikram Iyer, a doctoral student in electrical engineering and a principal researcher on the project. The wings—which flutter sideways like on houseflies—are tacked on to a micro-board with circuits and a power source, and the entire package weighs about 190 mg. That’s about the weight of a honeybee, and a bit heavier than a toothpick, which weighs 130 mg.

Previous attempts have been made to build flying insect-sized robots, like Harvard’s RoboBee microbots, but had to be wired to power sources on a desk. Fitting batteries on such a lightweight robot is a challenge, so the researchers put a mini-solar panel on the RoboFly. Rather than ambient light, the RoboFly draws energy from its solar cells via lasers, which can generate a lot more power.

For You: Safety and Efficiency, Brick by Brick

The solar cells are custom silicon-based vertical multijunction cells designed for the laser wavelength, not the full spectrum of light. Once the laser shines on the solar cell, a boost converter and piezoelectric actuators convert the low-voltage signals up to 240 volts, which are needed to flap the wings. In a controlled experiment, lasers were targeted directly at the robots, which flew for a few seconds. The central processor is an ARM Cortex-M0 microcontroller, which is used in some wearables.

“The goal is to try and take this idea—small flying robots—much closer to real practical applications,” Iyer said, while also acknowledging there are issues that need to be resolved. The goal with RoboFly was to show the wire-free possibilities of such flying robots, adding “severing-that cord is what this is all about.”

A RoboFly-like bot could be even more useful when loaded with sensors. It could be used by first responders during emergency situations, to detect gas leaks or pollutant, or even be deployed in space missions.

“Many cheap robots can be useful in the ways expensive robots can’t,” said Johannes James, a mechanical engineering doctoral student at University of Washington, and researcher at the Autonomous Insect Robotics Lab.

There’s a big distinction between drones and RoboFly, the researchers said. The RoboFly shows how flying robots can be scaled down to insect level with fewer electronics, while drones can’t scale down beyond a certain point with the batteries and propellers.

Drawing inspiration from insects also provides new ways to understand how to build robots, from the flapping wings, to understanding how insects detect odor, localize it, and track and find the origin source. How insects perceive the world and how they drive flight control are topics the researchers will continue to investigate and implement into future iterations of RoboFly.

There are other challenges to tackle. Lasers and humans don’t mix well, but there are ways to overcome that with laser safety systems. As commercial technology matures, it will also be possible to harvest energy from sources like RF signals. It may also be possible to install supercapacitors, which could be recharged after flight. New materials like GaN (gallium arsenide) could be used in thin film solar cells.

But don’t expect a defense mechanism against its conventional enemy—the flyswatter—on the RoboFly anytime soon.

The goal is to try and take this idea—small flying robots—much closer to real practical applications.Vikram Iyer, University of Washington