A New Solar Cell on the Block

A New Solar Cell on the Block 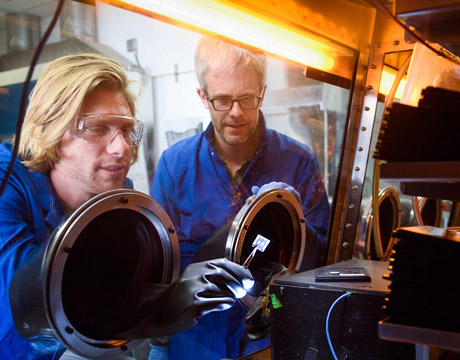 How do you make a solar cell cheaper, more efficient, and more versatile? The answer, say researchers at Stanford, is to use perovskite instead of silicon. Already their lab versions are outperforming silicon, have proved easier to produce, and have the potential to be manufactured on thin flexible substrates. That’s another way of saying they could someday solve all our energy needs.

Perovskite refers to a crystalline structure similar to that found in the rock of the same name. But where nature’s perovskite is calcium titanium oxide, the stuff fabricated for solar cells is lead, tin, and iodine. These materials turn out to be much simpler to process than silicon.

“We started off with a metal ammonium lead iodine perovskite. That’s the basic archetypal material,” says Giles Eperon, a postdoctoral research fellow at Stanford, who’s been working hard to make the new cell viable. “Since then we’ve been swapping things in and out.” By substituting tin for lead and bromine for iodine, the researchers have been able to fine tune the absorber. “Basically, you have a really good optical material, and you can put the band gap wherever you want it within this wide range we have. Conceptually it’s easy. Form an engineering point of view it comes with a whole host of challenges.”

Chief among them is the fact that perovskite with tin crystalizes very quickly. Usually, with spin coating deposition, a solution is spun off a substrate, leaving a thin, wet layer which is then heated until it crystalizes. “With the tin-based material, it was crystallizing so fast it was effectively forming the final crystal materials while it was spinning,” says Eperon. “That has bad implications for the morphology of the film.” To slow the crystallization, and leave the film smooth rather than rough, the team dived into the literature. They found that by adding the solvent dimethyl sulfoxide, they were able to slow crystallization, after which they used an anti-solvent wash to remove any remaining the dimethyl sulfoxide molecules.

In the past, researchers have steered clear of tin based perovskite, because of its sensitivity to oxidization. By mixing in lead, Eperon managed to make an alloy that was just as stable as lead.

Producing perovskite is cheaper and more eco-friendly than producing silicon. Where silicon requires temperatures of 3000 degrees, perovskite can be processed at room temperature. Nor does it require the toxic chemicals needed to treat silicon. Perhaps the biggest advantage is the fact that perovskite is solution processable. It can be used with inkjet printing, slot-die coating, and spray coating. Silicon has to be sliced into rigid wafers and will never be sold on a roll.

Obviously, we need to be producing tens of centimeters squares if you want to make a module. And with solution processing it’s an unanswered question as to how effectively you can solve that.

But before perovskite solar cells can be printed out like so much newspaper, there are still a few problems to solve. The cells Stanford is making have 10 different layers that range between two and 500 nanometers in width. They can’t touch each other, needless to say. That’s not too difficult a requirement for the tiny less-than-a-square-centimeter cells Eperon has been making in the lab. “Obviously, we need to be producing tens-of-centimeter squares if you want to make a module,” he says. “And with solution processing it’s an unanswered question as to how effectively you can solve that.”

That’s not all that’s unanswered. Already, Eperon and his colleagues have, in the lab, beaten silicon for efficiency. “We’ve been working on pushing it further and further,” he says. “Really, the remaining question is how far can it go?”