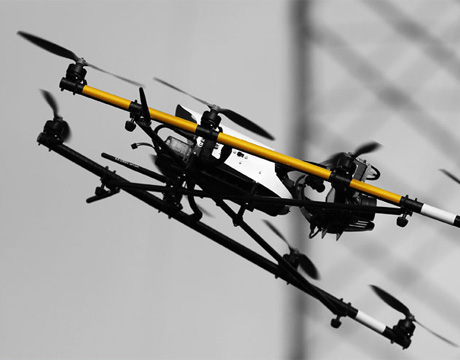 Drones aren’t just for snooping, spying, stealth attacks from above, and pranks anymore. The oft-maligned technology is now in the business of saving lives, by going where humans can’t go without taking on considerable risk.

Industrial inspection is the niche that screams out for remotely operated aerial vehicles, as they are sometimes known. Jobs that once required people dangling from ropes, or atop precarious scaffolding, are now about as risky as playing a video game. “In the UK the largest number of industrial fatalities comes from falls from heights,” says Phil Buchan, a mechanical engineer and the commercial director of Cyberhawk, Aerial Inspection and Surveying Specialists. “Our technique is reducing the need for people to work at height.”

That technique involves more than sending up a GoPro on a quadrocopter controlled by an early-adopting technophile. Cyberhawk uses two highly skilled employees for every job. One is a trained drone pilot, the other a trained engineer. While the pilot controls the vehicle, the engineer controls the camera.

The engineering half of the duo may have once been an inspector or may have been trained by Cyberhawk after graduating. Pilots might be hobbyists or may come from a military background. At Cyberhawk they go through four levels of training, with only level-four pilots sent out to inspect assets in complex harsh environments such as offshore oil platforms.

The cameras Cyberhawk use can look straight up and straight down, giving them an unrestricted view of whatever might need inspecting. “We can fly under the deck of an oil platform and turn the camera and look directly up to inspect the underneath of the deck,” says Buchan. “Traditionally that’s an area difficult to inspect, difficult to have access to.”

But these ogling RC aircraft do more than just reduce the need for dangling humans and associated risks. They can save industries serious money. For example, until now, checking a flare stack meant shutting down production. “A flare stack typically has a large flame coming out of it, so you can’t send someone up there to inspect it,” says Buchan. “We can do our inspection while the flare is online, and now we can do it every six months to monitor degradation.” One supermajor oil and gas company said they saved $11 million by not having to shut down during such an inspection in Nigeria, thanks to a Cyberhawk team.

After some 10,000 safe commercial flights in 20-odd countries, Cyberhawk has shown the world that drones are good business for cutting risk.

In the U.S., though, regulations make that business a little more complicated. Ventus Wind had to ground their inspectors when the FAA outlawed all commercial drones. “We were operating for about two and a half years without any problem,” says Marco Zvanik, the company’s CEO. “It put us out of business.”

To get back in business, the company had to jump through a fair number of hoops. They had to apply for (and received) a section 333 exemption from the FAA; all their pilots now have to be licensed pilots; a spotter must accompany all the pilots for all flights; the drones cannot fly out of the line of sight at any time; and all drone flights have to be registered with air traffic control, days in advance. But however onerous these requirements might be, it does raise the bar for entry into the business, eliminating potential amateur competition.

Whatever time and money the bureaucratic process might cost, Ventus Wind is still able to offer incredible savings to those in need of a thorough examination at a high altitude. Their cost for a single turbine inspection ($1,700) is a mere 15 percent of what it would cost to inspect in any other fashion.

The price is likely to go down—and efficiency up—as drone technology improves. With current battery technology the drones can’t stay up longer than 15 minutes. Ventus has recently put sensors on their drones to detect leaking methane, but any addition to the drone sucks up a huge percentage of a drone’s hauling capacity. “There is a lot of hardware that works on the back of a truck but is impossible to use on a drone,” says Zvanik. Advancements are needed on the software side of things too. “You can capture all the great videos and infrared you want, but you have to be able covert that to a usable format and generate a report the asset owner can actually do something with,” he says.

However much room there may be for improvement, the drone inspection business is already saving money and saving skins. “Just the other day I watched a helicopter dangling a man a 100 feet below, going from transmission tower to transmission tower looking at components,” says Zvanik. “It’s like, ok, you can do that with a human, but you can do it a lot faster and with plenty less money using a drone.”

For Further Discussion
A flare stack typically has a large flame coming out of it, so you can’t send someone up there to inspect it. We can do our inspection while the flare is online, and now we can do it every six months.Phil Buchan, commercial director, Cyberhawk