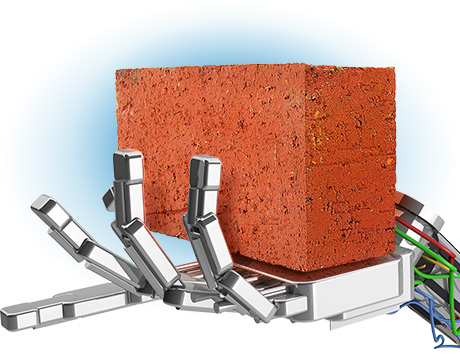 Safety and Efficiency, Brick by Brick

In this day and age, with the lightning fast pace of construction that has become the norm, it can often seem as though buildings are created overnight. However, the reality is far different. Long hours of work for construction teams can be grueling, dangerous, and costly.

Enter Construction Robotics of Victor, NY. The company has developed a robotic masonry system named “SAM100” (Semi-Automated Mason) that has been used to build everything from grocery stores to apartment buildings. Scott Peters, CEO and co-founder of the company, says the system is precise and easy enough to use that masons can be taught how to calibrate it in just five minutes.

But efficiency is what sets SAM apart. “It literally can lay the amount of bricks in one hour that can take a mason a whole day,” Peters says. However, there are limitations to what kind of structure it can create. “For a building with longer walls that are straight, it’s great,” he says. “But when you have a lot of turns, a lot of changes of direction, that’s not what this is presently for.”

For many projects that are more straightforward, it’s truly helping to change the way buildings can be created. Scott Peters, co-founder, Construction Robotics 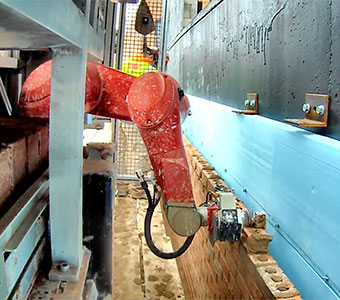 SAM100 began with the company’s co-founder Nate Podkaminer, who spent more than 50 years in commercial construction, approaching Peters about what he felt was an inefficiency in the market. “He said this industry in some ways is backwards and that masonry, in some ways, was a part of that,” he says. “[We thought]: You’re taking individual units and repetitively placing them on a wall to put up a veneer. Couldn’t robotics do some of this?”

The key parts of SAM100 include a motorized carriage that travels along a scaffold. “It has a mast-climbing work platform, a big bridge suspended on the mast, and it climbs up the mast, with the idea of working on the side of a commercial building,” says Peters, who was previously a senior process engineer for General Motors. “It’s designed to work on a track system bolted to the mast climbers. In that connection there are safety features, but [it has] a track section and an extension of a deck and SAM is separate on that deck. And it goes back and forth on the track system. A carriage rides with the tracks and we have story poles, which is how the masons set the course.”

“It shoots down the wall like a streamline would,” he says. “SAM itself is a self-contained unit set on the scaffold and on there we have a moving terrace and a generator so it’s self-powered. And then you have an electrical cabinet for components. We also have mortar mixing and a separating unit. There is also an area where bricks are loaded in bulk and the conveyor puts them with SAM. There are a couple of chutes where we can manually load in bricks and software. The system will say we need a specially covered brick or maybe a specially cut brick and load it into chute one or chute two.”

A gripper reaches over and grabs each brick, to which it applies mortar. Then it places it on the wall.

“When it’s placed, the laser system ‘talks to it’ and determines its position in space and corrects for that position and places it where it’s supposed to go,” he says.

So far the response has been positive with many touting SAM’s safety and efficiency. Those corners remain a challenge, however. “The system may not deal with many corners,” Peters says. “But for many projects that are more straightforward, it’s truly helping to change the way buildings can be created.”