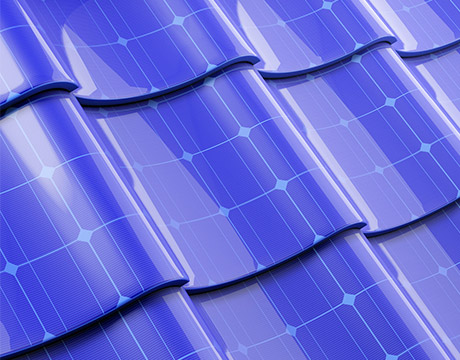 While flexible solar cells can be rolled out over a large surface to generate energy, mass-producing them remains challenging.

Want to cover your camper with thin, flexible, film-like solar panels to capture electricity on the go? An internet search will turn up many stick-on solar panels. YouTube videos teach viewers how to make homemade versions. But mass-producing and commercializing quality products based on the emergingtechnology remains elusive. The thought is that someday the solar panels may become ever present, always gathering power when the sun is shining; powering mobile devices, computers, cars, even shoes. They’re cheap, easy to install, and can be quickly rolled over a large surface.

Researchers at Aalto University in Finland and the University of Montreal are now studying how to make industrial-scale manufacturing of these types of solar panels feasible.

To do so, the electronic cells must be made in rolls of flexible plastic or metal foil through something called roll-to-roll processing. The rolls then undergo ink-jet printing in which dye and electrolyte components are precisely injected into the plastic or foil pieces, says Kati Miettunen, a project manager in Aalto’s bioproducts and biosystems department.

For You: 9 Innovations in Solar PV Technology

While a similar manufacturing process is used across many industries, the fragile cells and the material that covers them make it challenging. They can’t be damaged while they move quickly through the rolls, she says.

Also, sealing the flexible cells is challenging for manufacturers. If the cells aren’t fully closed to the elements, liquid electrolyte could leak out of the cell or impurities could seep in, greatly reducing the device’s life, Miettunen says.

Researchers would have to find new ways to connect the substrates, since conventional techniques such as glass-frit bonding, now used in flat-panel displays and other devices, are unsuitable for flexible cells, she says. Even with these drawbacks, researchers and developers continue to look at ways to manufacture the flexible solar panels because the market for them is potentially huge.

Those panels can fit many types of solar applications and are more aesthetically pleasing on buildings and other structures than the glass panels often used today, says Hannah Bürckstümmer, strategic marketing manager at Merck Group, a pharmaceutical, chemical, and life sciences company in Darmstadt, Germany.

They have other structural benefits as well. If a roof, for example, can’t bear the heavy load of traditional solar panels, the lightweight panels can be affixed without compromising structural integrity. They can also be installed on nonconventional structures, for example, an art installation on the street. “Imagine the sails of the Sydney Opera as power plants,” Bürckstümmer says.

Merck is working on flexible solar panel technology that can be printed on substrates using techniques that include continuous roll-to-roll processing, which Bürckstümmer terms “a simple printing technique.”

The company’s technology mixes a polymer in repeating units, “like the pearls in a pearl chain,” and a carbon molecule. These two compounds are mixed and dissolved to become a type of ink.

But Merck’s flexible solar panels, like that of many other companies, remain experimental and aren’t mass manufactured. The lifetime of these devices remain an issue, as do environmental concerns, another challenge to commercialization, say the researchers.

“Another prerequisite for commercialization is making the lifetime of devices adequate in relation to the energy embedded in the fabrication of the devices so that the solar cells won’t degrade before they have produced more energy than was used for making them,” says Jaana Vapaavuori, assistant professor of chemistry at the University of Montreal.

New discoveries using biomaterials or a hybrid material with wood pulp as substrates for the cells could move the flexible solar cells toward mass commercialization, says Miettunen.

Meanwhile, work continues at many companies to bring flexible thin-film solar panels to a widespread market.