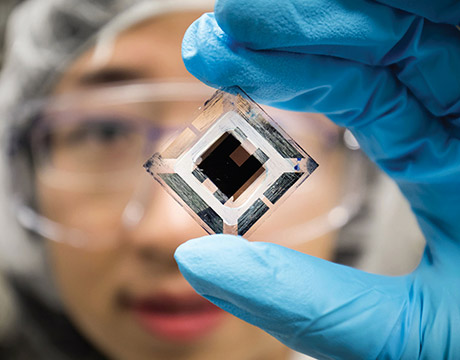 Organic solar cells could be placed inconspicuously on a window or the roof of a car. But up to now, there has been little point: The efficiency of organic solar cells in converting sunlight to energy has been poor, especially compared to conventional silicon-based solar cells.

That fact isn’t lost on researchers at the University of Michigan, Ann Arbor, who have worked to develop an organic solar cell based on carbon materials that pushes the needle ahead in terms of efficiency.

The multidimensional solar cells, made of simple, nontoxic materials, achieve an efficiency of 15 percent. That’s higher than the 10 percent to 13 percent that have been achieved so far in organic solar cells.

“This is the first work to demonstrate 15 percent efficiency,” says Xiaozhuo Che, a researcher at University of Michigan involved in the development of the organic solar cell. “All molecules we use are nontoxic. Some solar cells have lead and other materials that can be very toxic,” she says.

A potential use is in smart windows, where the organic solar cells can be coated as transparent material. The material is flexible enough to be used on car roofs to generate power for car subsystems such as in-vehicle entertainment systems. It may also be suitable for the exterior of everyday electronics and can be placed in paint, Che says.

The researchers developed a stacked organic solar cell with interconnecting structures to convert a wide spectrum of light into energy. They had to balance the material and thickness in order to raise efficiency.

The team also had to prove that both vacuum thermal evaporation and solution process could be used to make organic solar cells. “There is no clear answer yet if one would be better than the other. In our work, we combine these two technologies in a tandem structure, which are two cells connected in series, that provides design flexibility for high-efficiency multijunction organic photovoltaics,” Che says.

Innovations were also made in the process of bringing the multijunction solar cell together. The solar cell is also proof that the efficiency of organic solar cells isn’t limited only to the materials, Che says.

The research team had aimed to develop a solar material that was cheap and easy to manufacture. The materials in the organic solar cell used are similar to those in OLED displays found in high-end smartphones, and can be made in those factories. OLED displays are primarily made by Samsung and LG Display, but smaller display makers are implementing the capabilities.

“It should be commercialized in five years,” Che says, though she addsthat the lab would need a partner to take the technology to market. “What we are now trying to do is push the efficiency to new records.”

For Further Discussion
What we are now trying to do is push the efficiency to new records. Prof. Xiaozhuo Che, University of Michigan