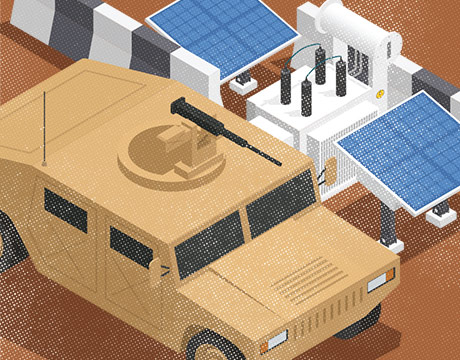 Modern military forces on the move require gas and diesel for their vehicles and power to run their mobile nerve centers. But delivering fuel and other forms of energy to the troops can be extremely dangerous. Fuel convoys are a prime target, beset by ambush and IEDs that kill and wound. To reduce those convoys and casualties, the military and its researchers are now developing alternative energy sources for forward bases.

One person was killed or injured for every 24 fuel supply convoys in Afghanistan, a 2009 report from the Army Environmental Policy Institute calculated. In 2007, the military ran 897 such convoys there, according to that report. “If you reduce how much fuel you need, that’s fewer people shipping fuel across dangerous country,” says Gregory Martin, energy manager at the National Renewable Energy Laboratory’s Energy Systems Integration Facility.

Martin is a key part of a NREL team that produced a device that could replace diesel generators. CUBE, for Consolidated Utility Base Energy, converts power from a variety of sources into usable energy, switching between solar panels and batteries to deliver an uninterruptable power supply. The team last year proved the concept, demonstrating fuel savings and power quality against standard diesel generators. 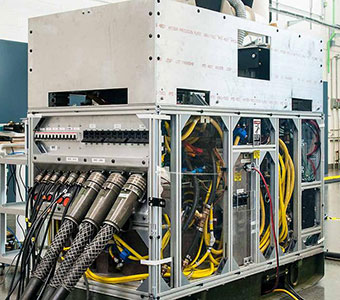 CUBE does not contain any of the power sources. It is more of a protected, distributed generation box. All of the power sources are connected to it. Software developed by NREL consistently governs the most efficient mode or type of power, transitioning from solar to batteries or to a backup diesel generator, for example. The device can operate in 18 different modes and transition without interruption.

Martin credits former NREL electrical engineer Mariko Shirazi with developing the depth of the software, which the lab copyrighted. It is the key to the device. Much of the hardware is off the shelf. Measuring 3 feet long, 3 feet wide, and 5 feet tall, it fits into the army’s design parameters for a mobile power source. As a research project, however, it is not designed for manufacturing.

“It served to show the army what is possible,” says Martin. “But it is not professionally laid out.”

CUBE uses a liquid-cooled system not unlike a truck radiator to handle wild swings in temperature, from -40 °F to 140 °F. But the control platform and its software powers the device. CUBE can draw power from whatever source is available and determine the most efficient. If solar is available, for example, it will use that and shut down backup generators without interruption. Or it can charge its battery and pull power from that when the sun goes down.

For You: Read about the latest in energy innovations at ASME.org

NREL proved the concept in two 24-hour tests that drew power from a lithium-ion battery, simulated solar panels, and two diesel generators. It achieved a 31 percent saving in fuel use compared to the diesel generators.

Since the test, NREL researchers tweaked the device to lighten the load, replacing the original 575-pound AC transformer with a 175-pound DC transformer. Lighter equipment helps with mobility.

The Air Force just finished testing a separate device - a mobile, hybrid energy storage and management system - to prove the concept in the field. Housed in a two-wheel hitch trailer, the device successfully provided heating and air conditioning to tents used to house Air Force recruits in training. Tents were fitted with solar panels that supplied power during the day. The system within the trailer includes lithium-ion batteries and hardware and software that transfers power from one source to another, while charging the batteries when the sun shines.

“It has two DC ports and one AC port,” says Eric Lang, senior research scientist at UDRC. “It is very flexible in what it can do, taking solar and interacting with batteries on direct current. Additionally, it can bypass every system through the controller and take from the grid or [diesel] generators.”

The project is a key step in meeting the Air Force Civil Engineer Center’s goal to develop a complete, deployable, self-sustaining power system. The Air Force already is working with the Army’s Research, Development and Engineering Command’s Communications-Electronics Research, Development and Engineering Center to test the trailer and develop microgrid standards.

The next step is improving the device’s flexibility and tweaking it to work with NATO specifications that use higher voltage and lower frequency, Lang says. Eventually, he sees researchers building an app to manage the system from a smart phone or other device.