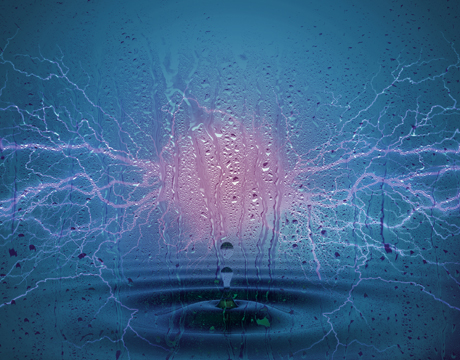 A Cheap Way to Convert Vapor into Fresh Drinking Water

MIT engineers have devised a new system that captures water wasted in clouds of vapor by zapping droplets with a beam of electrically charged particles. The droplets can be collected and then reused in a power plant or sent to a city’s water supply system for a low-cost supply of water.

A prototype of the system that will serve as a full-scale pilot is being installed at MIT’s main utility plant and scheduled to start up this fall. The natural gas co-generation power plant provides most of the campus’ electricity, heating and cooling.

The work is the fulfillment of a vision of mechanical engineering professor Kripa Varanasi, who wanted to come up with an electrodynamic approach to help solve the world’s serious water issue that affects every continent and billions of people. According to the United Nations, there is enough fresh water on the planet for seven billion people, but because it is distributed unevenly and much is wasted, many regions are chronically short of water.

Varanasi’s idea was to develop some sort of device to capture water wasted from vapor where air is laden with water droplets, both from natural fog and the steam plumes discharged from industrial cooling towers. Fog harvesting, or fog collecting, is a known technique to provide a source of fresh water in dry regions. However, success depends on the often uncertain occurrence of fog and the efficiency of the collectors, which Varanasi said is only about one to three percent. Such projects in various places around the world have received mixed reviews.

Varanasi’s project began in earnest about five years ago when a student, Maher Damak, joined his team. The the work became part of Damak’s thesis for his doctorate, which he earned this year.

Through extensive lab experiments the two first began to identify the “bottlenecks” with current fog collection techniques, which typically uses a mesh material hung in the path of fogbanks along coasts where fog comes in from the sea. “In the initial stage, the important thing was asking the right questions and realizing where the problem really was,” Varanasi says.

People have been focused on changing the properties of the collector itself, but Varanasi and Damak realized that the real problem was actually getting the droplets to the collector. “That was a key realization,” Varanasi says.

They learned that the fog droplets often are carried around the mesh with the airflow, similar to what happens when air flows around an airplane wing, separating into streams passing above and below the wing. Making the wires bigger or the spaces larger would hamper overall airflow and reduce the amount of water collected even more.

“We started by figuring out what kind of forces we would need,” Varanasi says. Their concept was to zap water-laden air with an electrical force in order to overcome aerodynamic drag forces. With the water droplets electrically charged, they can be attracted to the fine wire mesh in their path. The droplets collect on the mesh and drain into a collecting pan.

“Now you have a much stronger force than the wind,” Varanasi says. The fundamental work took about four years. “Then almost two years ago, we started to think about what to do next,” Varanasi said. “In my lab we do basic science research that will change the paradigm of things, but we also think about scaling up to take things to market. I wanted to have a tactical way to have an impact on the water market.”

Their focus turned to the cooling towers, where water vapor is even more concentrated than fog, making the system even more efficient. The team, which now included another graduate student from Varanasi’s lab, Karim Khalil, built a small lab replica of a power plant cooling tower stack emitting a plume of water droplets and placed their ion beam and mesh screen on it to demonstrate the concept (which you can see on this video).

Last year with the system well on its way, the team spun off the project and started a company, Infinite Cooling, to further develop and commercialize the technology. Since then, the project has won several clean energy and entrepreneurial competitions with awards amounting to hundreds of thousands of dollars. The team published an article describing their work in June in the journal “Science Advances.”

The testing at MIT this fall will include using different types of mesh as well as data collection to use in discussions with power plants. The team will continue to monitor and gather data on how water consumption changes with the use of their technology. The device can also be adapted for cooling towers used in HVAC systems in large malls, data centers, hospitals and resorts. For a 250-MW power plant, the device is expected to collect and save over 150 million gallons of water per year, amounting to an estimated annual $1 million in water savings, Damak says.

One day soon, Varanasi envisions water farms consisting of rows and rows of cooling towers, supplying fresh water to parched communities and recovering a substantial amount of the currently wasted water. That amounts to some 39 percent of all fresh water withdrawn from rivers, lakes, and reservoirs in the U.S. to cool electric power plants that use fossil fuels or nuclear power and a savings of millions of dollars.

In my lab we do basic science research that will change the paradigm of things, but we also think about scaling up to take things to market. I wanted to have a tactical way to have an impact on the water market.Prof. Kripa Varanasi, MIT