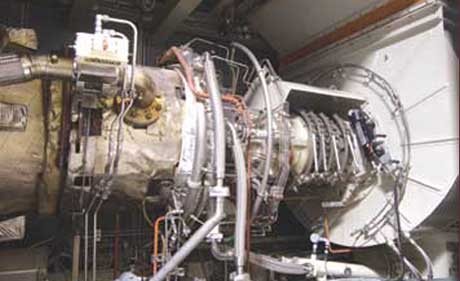 This is one of the three 7.5 MW gas turbines at the heart of the UConn cogeneration plant, as seen through the doors of the sound- and fire-proof enclosure.

Almost two decades ago, I recommended that our institution, the University of Connecticut, where I taught mechanical engineering, build a cogeneration plant that would help lower energy costs. Cogeneration, also called combined heat and power, is the production of more than one useful form of energy—both heat and electric power, for example—from a single energy source, such as the burning of natural gas.

At the time, UConn's Storrs campus of 15,000 students heated its buildings by steam generated in a central plant with natural gas-fired boilers. During warm months, buildings were cooled by individual electric-powered air conditioning units or by central plant chilled water. All electric power was purchased from the local notoriously expensive electric utility company.

Although my recommendation was not immediately accepted, as energy costs began to soar, almost doubling to $15 million by 2002, and with the prospect of even higher costs, the university administration’s thinking aligned with mine. The university asked for proposals for a plant that would produce a peak of 25 megawatts, 200,000 pounds per hour of steam, and 6,000 refrigeration tons of chilled water. Construction started in 2003 and was completed in 2005 at a cost of about $80 million. The plant, which went online the next year, makes better and more efficient use of a high-grade fuel and has a reduced environmental impact.

Cogeneration is the key. Heating buildings and people by combusting a limited, high-grade fuel to produce a low-grade form of energy is wasteful. Cogeneration uses the fuel to first produce both high-grade energy—electricity—and low-grade heat.

Total utility costs for universities such as UConn can be substantial. For fiscal year 2005, utility costs for electricity, natural gas, and fuel oil amounted to $23.4 million for the Storrs campus, 20% of the campus operating budget and 3% of the total campus budget.

The heart of UConn’s cogen plant is three 7.5MW Solar Taurus 70 gas turbines, with a rated thermal efficiency of 34%. The load at UConn ranges from 8MW to 22MW. The fuel of choice is natural gas, but the gas turbines can alternately be switched over to fuel oil. Each gas turbine drives a water-cooled electric generator. The exhaust, which runs as high as 900°F, passes into a heat recovery steam generator to produce both high-pressure and low-pressure steam. Low-pressure steam is used for campus heating, and during the warm months powers turbines that drive three refrigeration compressors supplying air conditioning.

High-pressure steam is used to power one single-stage steam turbine that drives a 5MW water-cooled electric generator, providing additional electric power and higher combined-cycle thermal efficiencies. The exhaust from the steam turbine, now at a reduced pressure and temperature, can be added to low-pressure steam to either heat or cool facilities. Thus, this portion of the energy conversion cycle in UConn's cogen plant has made three uses of a unit of gas turbine fuel.

Using the plant design requirements—25MW of electricity and 200,000 pounds per hour of steam, one can calculate a demand rate (ratio of heat required to electrical power required) showing that the fuel energy savings ratio could be as high as 48%.

I am proud of what we achieved although I can't help but feel that we could have done it sooner. As society faces the prospect of having to use fossil fuels more wisely in order to conserve a finite resource and to reduce the production of greenhouse gases, I can't help but worry that other large but sensible steps toward efficiency will also take as long.

If a large institution, such as a university or hospital, purchases electric power from a utility, it is in effect, burning two measures of fuel instead of one.