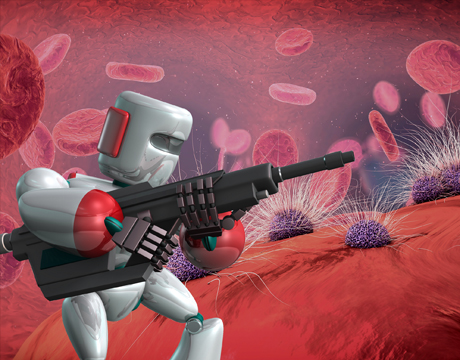 Blood does a miraculous job of keeping us alive, vigilantly attacking bacteria and toxins around the clock. But with antibiotic-resistant bacteria on the rise, robots are being called to the rescue.

Berta Esteban Fernández Ávila, a postdoctoral researcher at the University of California San Diego’s Jacob’s School of Engineering, has created a nanorobot that can boost the blood’s ability to fight infection. The tiny robots are made of gold nanowire and coated with a bacteria and toxin-slaying membrane. Powered from outside the body with ultrasound, the design may someday help save people from bacterial infections that doctors are finding themselves increasingly powerless to fight.

The coating is the device’s biggest innovation. Platelets in the blood target bacteria while red blood cells neutralize toxins created by bacteria. Both do their magic with the receptors on their outer membranes. Ávila decided to combine the two.

“We take a blood sample from a patient, extract all the platelets and all the red blood cells,” she says. “Then we extract the membranes from the cells.” The membranes are fused together using a physical, rather than a chemical, process. The platelet/red-blood-cell mashup is also resistant to disabling accumulations of protein and is not rejected by the body.

For You: Insect-Sized Robot Takes Flight

To make the final toxin-beating bot, pieces of gold nanowire are coated with the new membrane. The technique they used was so efficient, says Ávila, that “we didn’t have a bad batch of robots.”

Small defects in the design cause the bots to respond better to ultrasound, so Ávila made one end of the nanowire segments concave to keep the nanobots asymmetrical. The ultrasound sends the two microns-long nanobots moving at 35 microns per second. The bots swarm as a batch; there is currently no way to control individual nanobots. With this configuration, Ávila and her colleagues successfully reduced the presence of the antibiotic-resistant bacteria Staphylococcus aureus in a blood sample. In just five minutes the sample had three times less bacteria, she says. The team published its results in a recent paper.

The next step is to try the bots in living animals, probably starting with mice.

In vivo experiments will determine, among other things, how toxic the gold nanowire might be.

“We use gold because it responds well to the acoustic field,” Ávila says. “But we don’t know if this amount of gold will be toxic or not. We don’t think so, but we’re not sure.”

Other materials may do better in other fluids. Magnesium, for instance, might better survive water and gastrointestinal fluids. It doesn’t respond as well to ultrasound at the moment, but Ávila and her colleagues are looking into ways of making the material more sensitive to the sound waves. Animal trials will also allow the team to focus on dialing in the right dosage for defeating bacteria, a challenge that is currently bigger than any design problem they face.

Ávila and her colleagues targeted Staphylococcus aureus as a proof of concept. But the nanobots could theoretically be used against any malevolent bacteria. “Everyday antibiotics are less and less and less efficient, so we have to find alternative ways to fight these infections, Avila says “Using these robots, you can have better results.”

For Further Discussion
Everyday antibiotics are less and less and less efficient, so we have to find alternative ways to fight these infections.Berta Esteban Fernández Ávila, University of California San Diego.