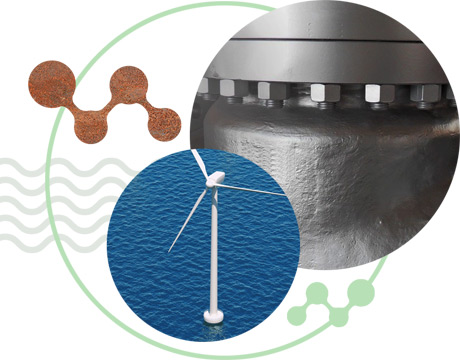 It is standard practice to use specialized coatings and paint to protect machinery and infrastructure from harsh conditions. But researchers are making steady progress in improving their effectiveness, using advanced manufacturing techniques and salting the coatings with smart particles for self-healing.

A European Union-funded research and development project has passed to the commercial stage, relying on thermally sprayed aluminum spiked with environmentally friendly, active antifouling substances to protect offshore steel renewable energy structures. The chemicals are added in small amounts. As the protective TSA eventually degrades, an insoluble calcareous material is formed to fortify the breach and provide protection.

In the US, the NASA Kennedy Space Center’s Corrosion Technology Laboratory has developed a smart, environmentally friendly coating for early detection and inhibition of corrosion that also has self-healing properties. It uses microcapsules formed through an interfacial polymerization process; one type of microcapsule contains a corrosion inhibitor and another contains an indicator. When corrosion begins to occur, the microcapsules react to the change in pH levels and the inhibitor is released, forming a film that protects and repairs the affected area. The indicator identifies the affected area with a change of color. NASA officials say the new coating poses no threat to the environment, an improvement on existing compounds.

NASA researchers developed the coating because the sun, heat and humidity of the Kennedy Space Complex’s location in south Florida makes it the country’s most corrosive environment, according to the American Society of Metals. The space shuttle program amplified the problem in the 1980s because of acidic exhaust from solid rocket boosters.

Work on the coatings began in 2004 at the Corrosion Technology Laboratory. Researchers went to work trying to find an alternative to existing coatings considered to be harmful to humans and the environment, such as hexavalent chromium. The substance is commonly used in aerospace and automotive industries to protect aluminum.

The U.S. Navy also is conducting research to replace hexavalent chromium with smart coatings. The work focuses on conductive polymers that form metal oxide films around the affected area. They form a dense, low-porosity film that restricts invasion of oxidants. The Navy already has developed a polymer that is a derivative of polyparaphenylene vinylene that shows promise for replacing hexavalent chromium treatment on aluminum alloys.

In Europe, EU researchers worked with thermally sprayed aluminum, already recognized as an effective coating for a variety of applications. As offshore wind power grows in European waters—12,631MW were already installed at the beginning of 2017 and another 3,000MW are expected by 2020, according to Brussels-based Wind Europe—planners recognized the need for better protecting the foundations as well as the turbines.

“Steel structures in marine environments are subject to many forms of degradation, two of the most problematic being corrosion and biofouling,” said ACORN engineer Henry Begg. “Although coatings to protect against such conditions exist within the shipping industry, where ships can be periodically dry-docked for maintenance, offshore structures are required to be moored in the water for extended periods of time and without ongoing preventive maintenance.”

ACORN researchers tested five types or combinations of coatings on sample plates, in submerged, tidal, and splash zones. The end product, a nonpaint product, provides a virtually maintenance-free lifespan for steel structures exceeding twenty years, say developers, and eliminates the need for costly, supplementary cathodic protection. A range of environmentally friendly antifouling agents are added to the coating in very small concentrations. They will then be gradually exposed at the surface of the coating as it degrades, expected to be at a rate of less than 10 micrometers per year and prevent barnacles from settling on the surface. Barnacles are one of the most harmful fouling organisms in seawater, and can destroy protective paints and coatings.

ACORN has been working with industrial partners to develop and market the new coatings and NASA also wants to commercialize its coating. In the meantime, big offshore projects are being built using the best of conventional TSA coatings. A joint venture of Germany’s E.ON and Norway’s Statoil is building a 385-MW wind project in Baltic Sea, comprised of 60, 6-MW turbines installed on mono pile foundations in depths of 23 to 27 meters.

Working with its engineers and partners, E.ON developed an automated coating line at a fabrication yard in Rostock to build the giant monopiles. E.ON officials claim it is the first fully automated coating line, handling piles with a maximum length of 81 meters and a diameter of up to 8 meters. After expanding existing coating halls, thermally sprayed aluminum was applied using a robot with two arc burners that sprayed a 350-micrometer-thick coating on the piles. The second step applied a sealing coat of resin. E.ON also claims it is the first time the process has been applied on an industrial scale. Previous TSA applications were used on smaller steel components that were submerged or on larger components above the water line.

As the smart-TSA coatings are commercialized, researchers believe it will boost environmental protection while lowering overall costs, increasingthe competiveness of the offshore renewable energy and furthering the rollout of additional offshore technologies because of a longer lifespan.

For Further Discussion
Steel structures in marine environments are subject to many forms of degradation, two of the most problematic being corrosion and biofouling. Harry Begg, ACORN