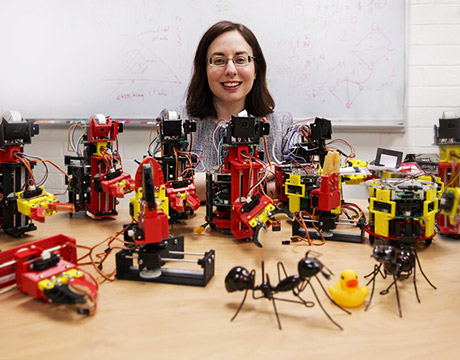 An Army of Tiny Robots to the Rescue

As an undergraduate student, Spring Berman, assistant professor of mechanical and aerospace engineering at Arizona State University, did research in a lab working on control of multiple underwater gliders for collecting data about the environmental and biological processes of the ocean.

She was fascinated by the idea of coordinating groups of robots to improve system performance as well as the fact that researchers found inspiration in nature – in fish that school together for finding food and protection from predators, in flocks of birds, herds of sheep, colonies of bees, and ants. All exhibit collective animal behavior, which, she explained, is characterized by the lack of a leader in a group, or collective. Instead, the animals perform together but each uses its own local sensor information about its environment or about its neighbors to determine next steps to accomplish a task rather than information from a leader.

She continued focusing on robotics, earning M.S. and Ph.D. degrees, and now leads a team of more than a dozen students, including eight doctoral candidates, developing techniques for controlling groups of robots that offer potential where it’s not practical for humans to be on site.

The goal is for robot collectives, or swarms, to be used in search-and-rescue operations in unsafe or inaccessible areas; in gathering enormous amounts of data from many points of view, such as tracking environmental factors that may help prevent detrimental changes over time, perhaps a species becoming endangered or monitoring forest fire; and in biomedical applications on a microscale or even nanoscale level to deliver drugs targeted to tumors.

Why a collective? Berman responded, “You might want to cover a large space in a short period of time or even accomplish a task over a longer period. If you use a single complicated, expensive robot and it breaks down, you don’t have a system. If you have a few hundred or thousand relatively inexpensive robots and a few of them fail, the others can keep working and the system will still operate.”

Because the cost of each unit must be low, the robots have limited capabilities for things like communication, sensing, power and computation. To keep costs down, Berman and her team were working mainly in the virtual world until recently, simulating robots performing a desired task because variables can be changed at a lower cost than working with actual robots. But, she said, “The real test is whether they work in practice. When you have a lot of robots, a lot of things can go wrong.”

Now, larger scale experiments can be conducted because the students have built 30 physical robots using a platform they designed. The objective is to figure out how to identify theoretical guarantees of their performance as a collective, given their limitations, such as no access to GPS, no prior information about their environment and lack of reliable communication with each other. “The challenge is how to get them to do something useful under these constraints,” Berman said.

Various projects underway include getting a target distribution of robot activity over an environment (such as a collective of robotic bees to use for crop pollination); how to get them to cover a boundary instead of an entire space; how to control a group of robots to transport a heavy or cumbersome payload as a team (in collaboration with an ASU biologist who studies ants that bring back food items to their nests in groups); and how to get robots to do mapping of any area underground or under water using very minimal data.

“We think about strategies that would not require explicit communication among robots but information just from their local sensor measurements to guarantee that they move in a specific direction,” Berman said. “That would have applications in things like disaster response, construction or manufacturing automated warehouses, other types of transport problems in hazardous areas.”

Some students are looking at whether there is a way the robots can not only measure their own states but estimate the states of the robots around them to make use of that feedback. “Just by exploiting feedback about neighboring robots, this can expand the types of collective tasks they can do,” Berman said. “We want to have the swarm do things like detect when it has accomplished a specific task in a decentralized way and agree: ‘Ok, we finished this task and we have to go on to another task.’”

One important capability is adaptation. “Part of using feedback about other robots’ states is part of this overall goal to get the swarm to adapt to changing conditions and environments [such as] avoiding unexpected obstacles. We want them to potentially operate for a long duration so things are going to change during that time. We want them to be adaptable.”

For Further Discussion
If you have a few hundred or thousand relatively inexpensive robots and a few of them fail, the others can keep working and the system will still operate. Prof. Spring Berman, Arizona State University