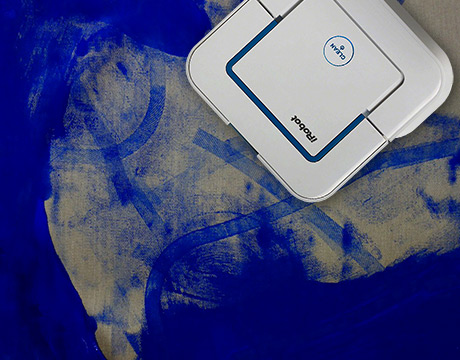 Addie Wagenknecht loves creating art in unconventional ways. For years, she’s hacked drones and robots to generate images that are visually shocking, and has used electronics in stunning ways to create art.

Her latest art exhibition, called Alone Together, was no less shocking. Using a Roomba robotic vacuum cleaner as a paintbrush, the art focuses on the female body as a symbolic representation of how women’s rights are being suppressed.

“I see this as urgent work about where the female body belongs in the present and future possible,” Wagenknecht says.

In some ways, the streaks of blue donning the art were reminiscent of works from abstract artist Jackson Pollock. The Roomba’s guts had to be tweaked to make the device a sophisticated artist.

For You: Remote Robot Cleans Trash from Water

Wagenknecht took Roomba’s vacuum mechanism and reversed its polarity so it would no longer have suction but actually distribute the pigment. Liquefied pigment was sourced from a chemist in Paris and loaded in the robot.

“The blue, or rather how the medium encapsulated the blue, was developed specifically for [French artist] Yves Klein by a chemist in Paris. He had copyrighted the blue so no one else could use it, but I found the chemist store he used in Paris,” she says.

There’s artificial intelligence at work in Wagenknecht’s art, as the final result is a void in the shape of a woman, painted by a robot learning the algorithm it intuited of her body.

A prior art series to Alone Together used drones to paint, with pigments sourced from India, and also Central Asia.

I want to create works that discuss how we think about AI while forgetting that there is actual AI in the pieces.  Addie Wagenknecht, artist

“I started in around 2007 with ‘Black Hawk Paint’ and ‘Internet of Things’ using Roombas, respectively as a play on IoT technology and creating something playful with them,” she says. “My experience was always how they needed more work to maintain than they were actually useful.

“The works are clues into the world technology and feelings that make up my experiences, but they aren’t explanations of them,” she adds.

Wagenknecht’s love for hacking and sculpture gives her close ties to the maker movement. She was one of the co-developers of the Lasersaur open source laser cutter in 2010. She also was an initial board member of the Open Source Hardware Association when it was formed in 2012. She’s worked with companies like Google on exploring the intersection of art technology, and her work has been acquired by the Whitney Museum of American Art.

“For the last few years, I have been doing a lot with machine learning and AI,” she says. “I want to create works that discuss how we think about AI while forgetting that there is actual AI in the pieces.” she said.