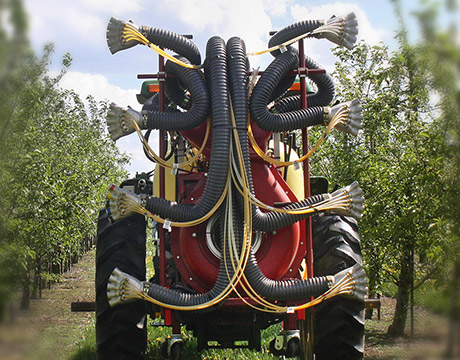 Pesticide sprayers use sensors and analytics to determine where to apply chemicals and the volume needed. Image: Heping Zhu / USDA ARS

Sensors and computer analytics have penetrated agriculture and farming, transforming the common tractor and other equipment into high-tech machines that offer precision and predictability in sowing seeds and reaping crops. But one segment has remained largely untouched. Farmers mostly apply pesticides the old-fashioned way, spraying fields and orchards with equipment that hasn’t much changed in decades.

That is poised to change with the development of what U.S. Department of Agriculture and Ohio State University researchers claim is the first “intelligent sprayer,” driven by high-speed sensors and algorithms that compute the optimum level of pesticides to apply through each of a standard sprayer’s 40 nozzles. That could greatly reduce the amount of chemicals used and help alleviate runoff, one of the largest sources of nonpoint source pollution in the U.S.

“In most cases, fields are oversprayed,” says Heping Zhu, a USDA agricultural engineer and Ohio State University adjunct professor. “Current technology is constrained in the rate of application. For instance, in a 100-gallon acre of spray volume, you spray without thinking of crop size, density rate, or other parameters.”

For You: Drones Take Farming to a Whole New Level

Zhu, along with OSU agricultural engineering professor Erdal Ozkan and collaborators at Oregon State University and the University of Tennessee, designed a spray system using laser sensors to refine the practice. “We use the laser sensors like an eye to detect a tree, its size and shape, and plant density to decide spray volume,” Zhu says. “It only sprays to targets.”

Using conventional sprayers, growers turn the sprayer on at the beginning of a row of trees and simply stop spraying at the other end. The sprayers are fitted to the front of a tractor that moves up and down rows of plants or trees, but it does not recognize any variations in plant height, density, or terrain. The new system works the same way, but the amount of chemicals used is dramatically reduced, results confirmed by testing in commercial fields over the past four years. It is not a robotic system, some of which are being developed for weed control.

That can mean big savings for growers as well a big boost for the environment. Growers used more than 1 billion pounds of chemicals on crops in 2017, according to statistics from USDA. Much of that excess finds itself polluting rivers and streams. Lake Erie’s persistent summer algae bloom is tied to agricultural runoff, as is the giant “dead zone” in the Gulf of Mexico.

Testing began in 2009, initially on nurseries with a wide variety of crops. It was then expanded to orchards and vineyards. Growers who used the intelligent sprayer reported chemical savings reaching $230 per acre annually, says Zhu. That means a grower with a 100-acre field would recoup the capital cost within one year.

The sprayer itself has 40 nozzles fitted to an attachment, 20 on top and 20 on the bottom. As the tractor moves along the row, the sensors detect the height, width and density of individual trees or plants. Working from algorithms written for the project, the analytics program computes exactly where to target—and where not to spray. For instance, it ignores gaps between trees, spraying directly on target, and can reach heights of 60 feet, a measure common for pecan trees.

“We wrote our own program for tree structures, for the system to make the decision where to spray,” Zhu says, crediting postdoctoral researchers with the task. The sensors put out 43,200 points per second to “read” the targets, bouncing the data back to the system.

The system is so accurate that it can differentiate seasonal tree cover, for instance. There will be fewer leaves earlier in the year, compared to later in the growing season. It accommodates for the discrepancy, doling out the appropriate volume of chemicals. Zhu says it works with the same efficiencies at any speed. “You don’t have to worry about how fast you drive,” he says. “The system takes over.”

Zhu and other project researchers claim the system, built with off-the-shelf equipment and customized analytics, is unique, and they anticipate commercial commitment soon. “No one else has done this,” Zhu says.

Researchers at Clemson University and Texas A&M University joined the project in 2015, expanding the testing to orchards. “The concept has been proven over five to six years of testing in the field,” Zhu says.

Zhu and his team now are devising a method to retrofit the system to existing sprayers, a development that would further reduce the expense. The system has already won awards from the American Society of Agricultural and Biological Engineers and 2018 Innovator of the Year Award from OSU’s College of Food, Agricultural, and Environmental Sciences.

Current technology is constrained in the rate of application. We use the laser sensors like an eye to detect a tree, its size and shape, and plant density to decide spray volume. It only sprays to targets.Heping Zhu, USDA engineer