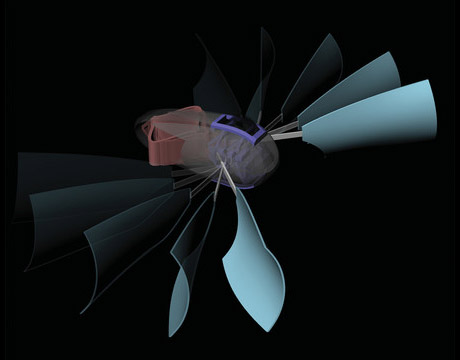 An artist's rendering of the new design for a robot that uses material deformation to propel itself through water. Image: Tian Chen and Osama R. Bilal / CalTech

Robots need power. They can’t traverse space, deliver a package, or do anything else without the juice to get the job done. But now engineers at California Institute of Technology have created a paddling, self-propelled, 3D-printed, battery-free, fuel-free robot powered by nothing more than the potential energy of its materials and architecture.

Made of a shape memory polymer, the robot’s paddling mechanism is triggered by a change in the temperature of the water it’s in. When the water gets warm enough, the robot can paddle forward, drop a token, and move back to its original position

“The main idea in this project was to show a proof-of-concept realization of 3D-printable soft robots, controlled by responsive materials,” says Chiara Daraio, a professor of mechanicalengineering and applied physics at CalTech, who lead the research and co-authored a recently published paper on the technology. “A snapping spring, albeit soft, can release enough energy to make a material jump or, as in our case, paddle.”

The jump, or paddle, is produced by the robot’s “bistable” geometry.

“It’s a simple mechanism that has two states. If it is in state one and you give it a small push it will disturb the system and it will snap to the second state,” says Osama R. Bilal, a postdoc in CalTech’s department of mechanical and civil engineering who worked on the project.

For You: The Robotic World of Melonee Wise

Bistability is not a phenomenon produced by engineers alone. It can be found in nature in the Venus flytrap and mantis shrimp. “They have this amazing amount of force that comes from bistability,” Bilal says. At the moment, the robot’s motion is a one-shot deal. Once it has performed its act, it has to be manually reset. Water temperature fluctuations alone can’t reverse the actuation. But there are materials that can back-peddle to their initial state using light or magnetic fields. Creating reversible actuation with temperature may be in the group’s future.

Even if a bistable bot is never able to reset itself, the activities it might perform are limitless. “In the future, one can envision making the functionalities of these material and robots even more complex,” Daraio says.

And there’s no reason that the trigger needs be limited to temperature changes. With materials that expand when exposed to changing salinity, moisture levels, or pH levels, a robot could be sent into motion by very specific environmental stimuli.

The applications for self-powered environmentally triggered robots range from the minuscule to the massive. (See this video for a few examples.) Imagine a solar array that could unfurl without motors or batteries. “In outer space you have a lot of temperature gradients that could be very useful,” Bilal says. “If we use materials that are responsive to heat, the material on its own would take care of the unfolding.”

On the other end of the spectrum, tiny bistable robots could be used for drug delivery. “If one of my colleagues can reduce the size of these robots, you can imagine them going into the human body,” he says. Using bio-compatible polymers, the robots could swim to a locale and target a specific site, all based on pH level or some other biological cue.

Needless to say, there’s much work to be done before bistable robots see inner or outer space. But Daraio, Bilal, and their colleagues, have already done what they set out to do: “To have a material do something that traditionally it would not do,” as Bilal puts it.

For Further Discussion
In outer space you have a lot of temperature gradients that could be very useful. If we use materials that are responsive to heat, the material on its own would take care of the unfolding.Prof. Osama R. Bilal, CalTech

Infographic: The New Job Market in the Green Economy