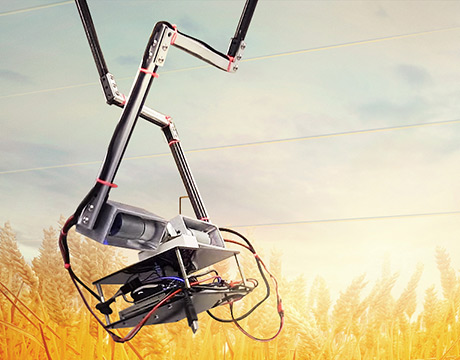 Agriculture continues to evolve as the world’s population grows and the climate changes, and assessing crops as they grow requires people and time. But robots may provide a solution.

The Tarzan robot — named after the Edgar Rice Burroughs character because it swings around on overhead lines to see the crops from different angles — is one option researchers are exploring when it comes to robotics and farming. The idea is to have many of these robots covering large square footage, and communicating with each other to check different areas and evaluate conditions.

“By 2050 there is projected to be nine billion people on the planet that will need more food, and there are a whole group of researchers trying to make plants better than existing ones,” says Ai-Ping Hu, senior research engineer for Georgia Tech Research Institute. “With soybeans, we have a partnership with the University of Georgia working with professors there and looking for strengths like drought tolerance. You can also look at aspects such as temperature of leaves, angles, size. This is called phenotyping, looking at outward physical expression.”

There’s a great deal of interest in automating this process, he says, with some looking at UAVs or drones to serve this purpose. But, he adds, a problem is that they have a short battery life. “They can fly for 20 to 30 minutes, but maybe a dedicated pilot is needed,” he says. “There are also safety issues and FAA regulations.”

Making parallel clotheslines was the start of the project. “By having robots with lots of sensors, on cables, and having them talking to each other, we can do really detailed phenotyping that I don’t think you can get with UAVs,” he explains. “Our way is a swinging motion which is called brachiation, a very efficient form of locomotion.”

The Tarzan robot’s parts include two carbon fiber arms at a central pivot where the payload is and the hands are made of 3D printed plastic. There is a thermal sensor and an app that will talk to a thermal camera and look at an accelerometer and snap images when there is no longer shaking.

At one point, the goal was to have the fingertips grip the cable with compression, but that was found to be unreliable because of slippage. They changed to a design where the fingertips go over the cable safety in case it slips through the grip.

The robots only need to be trickle charged with solar power and don’t have to leave the power lines. Because they are close to the ground, the images are very detailed.

“We can move the cables as we go along but they are currently about six feet above,” he says. “As plants grow, soybean plants get to about five feet tall and we will have to go higher than that so they don’t hit them when swinging to get the field of view we want.”

The robot weighs 10 pounds and will cost around $1,000, Hu says. “We’re looking forward to getting all the results in the field,” he says, “But we see a strong chance at assistance for farmers, which may lower costs for consumers.”

We’re looking forward to getting all the results in the field. But we see a strong chance at assistance for farmers, which may lower costs for consumers. Prof. Ai-Ping Hu, Georgia Tech Research Institute