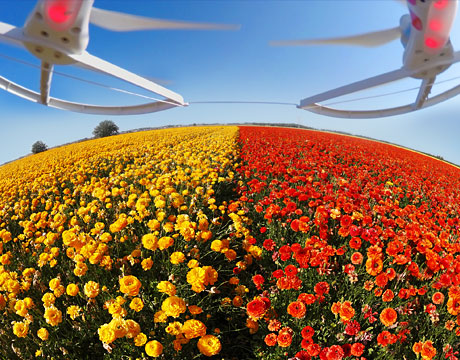 A field of buttercups, aerial view from drone.

Now that the Federal Aviation Administration has eased restrictions on the use of drones for commercial purposes, the agriculture industry is adopting new technology that can not only make modern agriculture in the U.S. more efficient but can also help protect the environment.

Today, drones play a key role in “precision agriculture,” also called site-specific farming, a technique involving crop surveillance and the use of cameras, GPS, sensors, special variable rate applicators, and analytics in crop management. Although the idea of using more technology in agriculture is not new, adoption has not happened as fast as expected. But times are changing, perhaps due to the loosening of restrictions on drones as part of a low-cost monitoring, measuring, and application system for fields and crops.

“Drones make life easier,” says AbhijitNagchaudhuri, professor of engineering in the Department of Engineering & Aviation Sciences at the University of Maryland Eastern Shore (UMES), who spearheads precision agriculture there. “You can program the drone to go to exact locations on the field where you want to send them.”

Schools of engineering and agriculture across the country, especially at land grant universities, have been collaborating for more than a century. Now more than ever, they are shaping the farming of the future.

For more than a decade, engineering students at UMES have been working with various cameras and sensors on aircraft, both manned and unmanned, in search of more efficient farming methods. The work evolved from an earlier project partially funded by NASA Goddard Space Flight Center that involved putting cameras and transmitters on a tethered blimp for aerial imaging. Using an infrared camera system, the transmitted images show shoreline erosion, agricultural land use patterns, and environmental conditions such as algal blooms in nearby Chesapeake Bay.

By the time the university received authorization from the FAA to use drones in 2014, students had outfitted everything from model airplanes to a Cessna 172 with cameras, sensors, and GPS systems that can perform a variety of activities. These include assessing crop health including identifying insect and disease problems and nutrient deficiencies; sensing soil health, weed and crop status; providing insight into yield estimates; monitoring agricultural runoff; and assisting in variable application of nutrients and pesticides.

“Precision agriculture has lots of aspects of finding out what would be the right input at the right time at the right place for crops to grow well,” Nagchaudhuri says.

By correlating the imagery with GPS, he and his students can pinpoint specifically what actions should be taken, precisely what amounts of each nutrient (or pesticide) should be placed where, even how densely seeds can be planted based on soil health.

“Once we understand that there is a reading where the crop is not doing well, we can get a location from GPS and go there physically and take preventative action,” he says. Without the aerial images and GPS capability, plants could be in much worse shape by the time problems are noticed and possibly too damaged to be saved. This allows farmers to anticipate what crops need ahead of time.

As for nutrients, in the past farmers would take a few samples and apply nutrients uniformly across the field. With new technology, sampling is conducted at many points across a field to be able to respond to variability within a crop or field. “If an area is stressed, we want to apply appropriate nutrients but not in excess. Nutrient management is very important on the eastern shore because the Chesapeake Bay is close by, and excess agricultural runoff can cause all kind of environmental problems,” Nagchaudhuri says. This work is very important to the restoration of the health of Chesapeake Bay, he adds.

Even though some equipment can start with off-the-shelf models, such as the drones, engineers are heavily involved at many touchpoints helping to integrate advanced engineering technologies into the process, including GPS receivers, GIS data bases, grid sampling/mapping techniques, yield monitors, variable-rate applicators and remote sensing imagery.

For example, variable application of nutrients across a field requires special equipment attached to the applicator, whether ground-based or aerial, and connected to GPS and computer equipment. Sensors are integrated into harvesters and work with GPS to determine how much harvest is coming from specific locations. UMES is also hoping to start getting more into irrigation management with thermal cameras if funding is approved. Already, there is work being done to measure environmental runoff in nearby waterways with especially developed autonomous water vehicles.

Farmers traditionally performed tasks according to daily and weekly calendars. Today, with real-time data on field, crop, and weather variables, they have come a long way from relying on the “Farmer’s Almanac.”

For Further Discussion
Drones make life easier. You can program the drone to go to exact locations on the field where you want to send them.Prof. Abhijit Nagchaudhuri, University of Maryland Eastern Shore