Stanford University and University of California, Santa Barbara engineers have developed a snake-like robot that extends like a vine by squeezing through hard-to-reach places. The robot is deployed as a rolled-up inside-out tube, with a pump on one end and a camera on the other.

Once initiated, the device inflates with air and grows in the direction of the camera, while the other side stays anchored. A control system that differentially inflates the body can make the robot turn right or left. A software system makes direction decisions based on photographs transmitted from the tip of the robot.

The snake robot was very nearly impossible to stop in these environments—we piled all kinds of things in front of it, and it always finds a way through.Prof. Elliot Hawkes, University of California, Santa Barbara 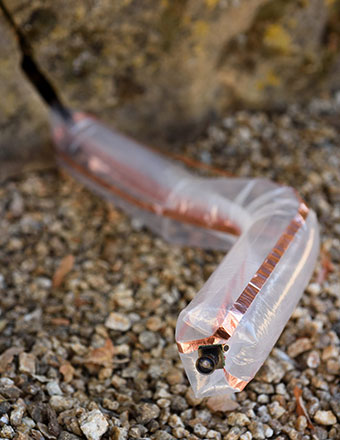 The vinebot is a tube of soft material that grows in one direction. Image: L.A. Cicero / Stanford University

“The body lengthens as the material extends from the end, but the rest of the body doesn’t move" says Elliot Hawkes, assistant professor in the mechanical engineering department at the University of California, Santa Barbara, who is part of the research team. "Its surface does not move with respect to the environment, meaning that there is no friction with the surface over which it is moving. The body can be stuck in the environment, but that doesn’t stop the robot because the tip can continue to progress as new material is added to the end.”

The research team tested the robot in a series of cluttered environments consisting of obstacles like sticky glue, nails, and other debris. “It was very nearly impossible to stop in these environments,” adds Hawkes. “We piled all kinds of things in front of it, and it always finds a way through.”

Researchers are planning to design newer models that will use tougher external materials, such as Kevlar. It may also be possible to extend the robot by using pressurized liquid instead of air, which would also be a way to deliver water to trapped victims, or for extinguishing fires within the rubble.

For You: Bee Robots Sense Rather than Think 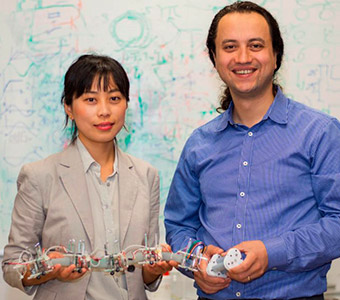 Jie Fu, left, and Cagdas Onal with one of the soft snake-like robots they are developing. Image: Worcester Polytechnic Institute

The low-level algorithms will control the robot’s motion; they may be the key to creating new types of robot mobility. For example, instead of only propelling the robot, new algorithms might allow the robot to better use friction to rise up from the surface. The high-level algorithms are focused on decision-making and autonomy. “These will choose which gait or low-level control the robot will use under specific conditions,” says Onal. “They also will decide the best mode of motion, based on the environment in which the robot finds itself.”

Onal and Fu want their robots to go beyond crawling and sidewinding to being able to raise their heads to get a better view, or even climb stairs or climb over obstacles.

“If I put the robot in the sand and then on gravel, it would exhibit different behaviors,” Fu says. “With the higher level we can introduce learning-based mechanisms so the robot will learn the best way to move based on the environment it is in and what it needs to achieve in that environment.”

Read More from ASME.org:
Superalloy Rescues MEMS Sensors
Getting It Squared Away