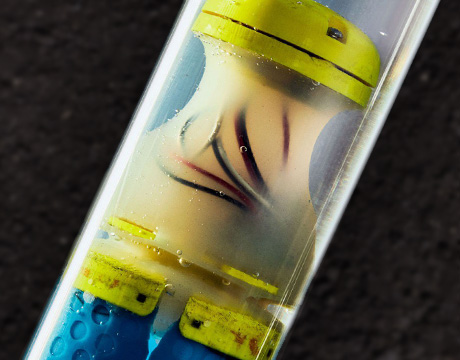 There’s a finite supply of water. We’re running out of it, and we can’t manufacture more. That means we have to do a much better job at managing and preserving what we have. A Boston startup is trying to do just that with a new robot.

WatchTower Robotics has created a soft-sided autonomous robot about the size of a softball that when inserted into a length of water pipe can find and detect leaks of nearly any size. It’s carried along by nothing more than the force of the water moving through the pipe.

“Water loss is a big problem. There’s money to solve it but no solutions in the marketplace,” said Tyler Mantel, the company’s product strategy lead, adding that company co-founder You Wu first began developing the robot as his thesis at MIT. “So six years of development led to the product we have today, which is able to find leaks in all pipe materials, looking for leaks the same way you'd feel the suction on the end of vacuum cleaner.”

Given the severity of the pending crisis, experts in the field say, solutions like these can’t hit the mainstream fast enough.

That number grows steadily. The problem is global, and it’s going to get a lot worse before it gets any better.

Most of the world’s water supply goes toward agriculture, which uses about 70 percent of the total. That number increases regularly. The global population is on track to reach 9.7 billion people by 2050, meaning there will soon be far more mouths to feed and much more strain on our already-stressed water supplies.

Despite the large number, heavy agricultural use is only part of the problem. Much of the water infrastructure in the U.S., such as underground pipes and treatment stations, is old and outdated. Materials that have been in use that long naturally break down over time, and when that happens they leak.

In the developing world this is an even sharper problem. In Saudi Arabia, the most expensive water market in the world, up to 30 percent of the country’s water is lost due to leaks and maintenance issues. What’s needed, then, is a device that can travel through water pipes and “feel” for leaks, notifying authorities when it finds one so that they can fix it.

That is what WatchTower Robotics built.

The current prototype is conical and built with soft robotic components including a series of small “wings” on all sides that are attached to sensors. As the robot travels through the pipe the wings pull in the direction of a leak due to the force of the water leaving the pipe, registering that tug at the sensor. The robot’s internal tracking mechanism then geotags the location and stores it for later analysis. Traditional GPS technology doesn’t work that well since most water pipes are underground, but the tracking this robot uses can typically pinpoint a leak down to an area of about a foot for every 500 feet of travel.

That kind of accuracy is new to most utilities, which often dig up large sections of a street to find and fix a small leak. The reason for that caught Mantel and the rest of the development team off guard.

“Early on we were sitting with a customer and showing him how the geotagging could pinpoint a leak on their GIS map within a couple of feet, and he looked me in the eyes and said, ‘Hey, can you help me find my pipe?’”

It turns out that much of the water infrastructure in this country and elsewhere is more than 70 years old, making it difficult for utilities to know exactly where some of their pipes are located. They have a rough idea of the path they’re taking, but in some cases very limited knowledge of exactly where to dig in the event of an emergency.

Autonomous sensing robots like this one are helping make those limitations a thing of the past.

One of the major innovations in robotics in recent years is the advent of soft robotics. Soft tactile materials replace the rigid metal frames typically used in “hard” bots to provide them with more lifelike and flexible movement. For Mantel and Wu’s prototype, this means a device that functions better than rigid smart PIGs, or pipe inspection gauges, for their purposes.

“Not being on a rigid frame allows us to compress and go through pipe geometry that other Smart PIGs never were able to,” Mantel said. “The other pipe inspection products are all smaller than the pipe diameter, which means they lose a lot in being able to isolate to the center of the pipe and being able to operate as a plug flow. Being compressible also allows it to stay oriented. I can turn and go through pipe geometries like a control valve or a tuberculation or anything that's diameter restricted without any problems.”

Although WatchTower is still in the startup stage, it is already thinking beyond water pipe testing for its robots and looking into gas line testing and other scenarios where liquids are flowing through pipes. But right now they feel that the biggest impact they can have is in water pipes.

“When Dr. Wu and I founded this company we had a conversation about what we wanted to do and we both agreed that we wanted to create something that made a positive impact on the world,” Mantel said. “That has driven a lot of decisions including how we're going to price ourselves moving forward. The closest product to ours in function and form is a $25,000 a mile product, which only makes sense for large municipalities if they have a localized problem. We want to get down to $2,000 a mile on average so that we can help with preventative maintenance and in the developing world. That’s where we’re going next.”

For Further Discussion
Water loss is a big problem. There’s money to solve it but no solutions in the marketplace.Tyler Mantel, WatchTower Robotics