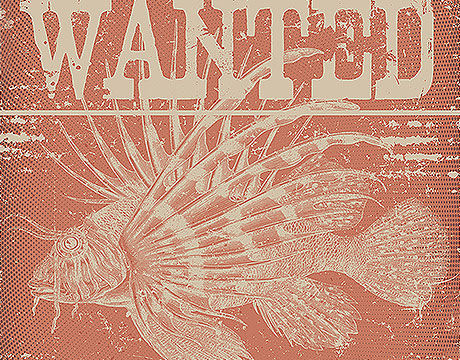 Lionfish, a voracious species native to the South Pacific and Indian oceans, are damaging marine ecosystems in the Caribbean and western Atlantic oceans by diminishing the native fish populations that are crucial for commercial and recreational fishing.

Unfortunately, the number of lionfish continue to rapidly expanding. A female can lay up to 30,000 eggs every three days. A mature lionfish can consume other fish 80 percent its own body size, and a single lionfish can drastically decrease the number of native fish on a section of reef in a matter of weeks. That devastation puts stress on coral reefs already impacted by climate change, pollution, and overfishing.

Methods to control the lionfish population include robots that suck them into a tube or stun them with electricity. But those often require tethers to communicate with the surface or maintain position, which are not allowed near most reefs.

Eager to find a better solution, engineering students at Worcester Polytechnic Institute (WPI) have built a prototype for an autonomous underwater robot that reduces the population of lionfish by spearing them and letting them float to the surface where they are collected and consumed as a local delicacy. The WPI robot is untethered and can hunt for fish on its own, without human direction.

“The goal is to be able to toss the robot over the side of a boat and have it go down to the reef, plot out a course, and begin its search,” says Craig Putnam, an advisor for the student team and senior instructor in computer science and associate director of WPI’s Robotics Engineering Program.“It needs to set up a search pattern and fly along the reef, and not run into it, while looking for the lionfish. The idea is that this type of robot could be part of the environmental solution.”

The most important requirement for the WPI robot is the ability to accurately identify lionfish from other fish within the reef ecosystem. The team used machine learning, advanced computer vision libraries, neural network software, and computer vision models to develop the robot’s computer vision system. The system was exposed to thousands of images of lionfish of different colors, taken from different angles and in different lighting conditions, to train it to recognize a lionfish with greater than 95 percent accuracy. Equally important, the robot was exposed to many pictures of human divers in order to train it in what to absolutely avoid shooting.

“The team found a product from Intel called a Movidius Neural Compute Stick (MNCS) that acts as a hardware accelerator for this kind of application,” Putnam says.“The software was modified to run on the MNCS and execution times were greatly improved.Classification could then be done in about 100ms—which is fast enough to be useful for generating steering commands to a remote operating vehicle platform.”

Another critical part of the robot is a revolving carousel called a Geneva mechanism, which holds eight detachable, buoyant spear tips. When targeting a lionfish, a metal shaft thrusts the spear into the fish. As the shaft retracts, the spear tip detaches and its buoyancy pulls the lionfish to the surface for collection.

“After each neutrally buoyant spear tip is dispensed, the Geneva mechanism rotates until the pin of the rotating drive wheel is caught by a driven wheel,” says student team member Katharine Conroy. “This driven wheel is subsequently placed in the correct position to eject another spear tip. It can be thought of like a revolver dispensing spear tips instead of ammunition.”

As more spear tips are used, the robot progressively loses buoyancy. To compensate for this loss, the researchers built a watertight, air-filled chamber that enlarges slightly after each spearing, to displace more water and equalize the robot’s buoyancy.

“If this is not done, then the thrusters have to work harder to maintain the robot at the proper depth,” Putnam says.“This would drain the batteries faster, leading to a reduction in the amount of time the robot could operate before needing to return to the surface for recharging.”

Finally, the young engineers were challenged to develop a water-tight chamber to protect the robot’s motherboard and electronics.

“In many ways, this was the hardest part of the project,” says William Godsey, a student who worked on the system’s buoyancy and electronics chambers. “Just because something is waterproof doesn’t mean it will work in salt water, which is an incredibly corrosive environment.”

The WPI robot is being designed to attach to a commercially available, autonomous submersible robot. Students in this academic year will conduct more advanced work on the robot’s GP s, which will enable it to autonomously establish and navigate a three-dimensional search grid as it seeks lionfish; the team will also refine the water-tight chamber. Other possibilities include an RF signal for each spear tip to identify its location at the surface, as well as robot-to-robot communication to keep multiple robots from chasing the same fish.

“We hope this research leads to advancements in the autonomous capabilities of lionfish harvesters,” says team member Eric Peterson. “One of the biggest issues that currently exists is the implementation of an untethered solution. Tethered solutions are unable to be deployed along the reefs in the Caribbean because the concerns arise that the tether could potentially damage the reefs. We hope that over the next few years our research makes the development of an autonomous, untethered solution possible.”