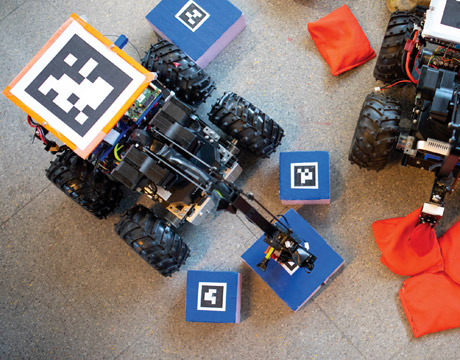 Researchers study beavers, termites, and other animals to program robot builders to react to environmental cues. Image: University at Buffalo

Beavers are widely known for their engineering ingenuity in building dams and water-protected lodges. Now researchers at the University at Buffalo have built a robot that mimics the way beavers draw cues from the surrounding environment to build structures.

The idea is to make robots that can build on-the-fly structures by understanding undefined environments, as opposed to building structures based on pre-defined plans. With the help of an algorithm and sensory input, the robot determines the kind of structure to make and the best way to construct it.

“It is currently very difficult for robots to operate reliably in cluttered, unstructured environments. This robot is designed to address the problem of mobility in such situations like disaster areas or remote areas,” said Nils Napp, an assistant professor in the Department of Computer Science and Engineering at University at Buffalo.

For You: Sensors Allow Robots to Feel Sensation

The ability to adapt flexibly to challenging environments is important for robots that are intended to work in the field, such as helping rescuers in disaster areas. The robot built by Napp’s team has an external 3-D camera to evaluate surroundings, map the terrain, and collect metrics like height of an object.

It also has an arm to pick up and deposit items. “Future versions of the robot will have all the sensors on board,” Napp said.

This robot is designed to address the problem of mobility in such situations like disaster areas or remote areas.
Prof. Nils Napp, University at Buffalo.

The researchers used debris from an earthquake testing facility and natural rocks in test scenarios for the robot.

The robot does not work with actual rocks and real-world clutter, but the goal is to get a degree of understanding on how the robot would scale to a human-sized system.

“The building material is compliant bags,” Napp said. “We use them because they conform to the environment so we can use them over pretty cluttered areas.”

The ultimate goal is to develop teams of robots that can work together autonomously and interact with the environment in real time to build structures in places that are otherwise inaccessible to human workers.