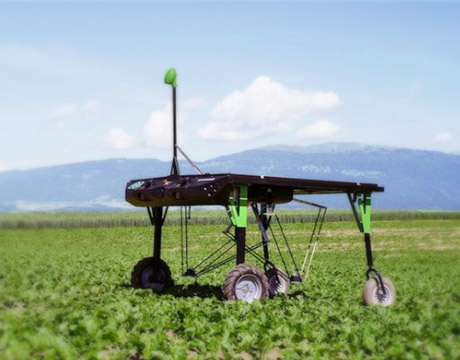 Most farmers today spray large amounts of herbicides over crops that have been genetically modified to resist these chemicals. The global market for herbicides is estimated at $25 billion, with three billion poundsof herbicides used every year.

Indiscriminant crop spraying has negative impacts to the environment, including toxic runoff that can pollute water sources and harm human health. And after 20 years of heavy spraying, weeds have grown resistant to glyphosate, the main ingredient in Monsanto’s Roundup, reducing its effectiveness as a weed killer.

However, robots may be coming to the rescue. Several innovative technology companies are developing weed-killing robots that selectively poison weeds with microbursts of herbicides, vastly reducing the amount of herbicides used by farmers. These robots roll through the fields, using sophisticated computer vision systems to identify individual weeds along their routes. This technology is also cheaper than widespread spraying, allowing farmers to reduce their costs and, in the process, disrupt the multibillion-dollar herbicide business.

EcoRobotix and Blue River Technologies are two companies that are close to commercializing their robot systems.

EcoRobotix has designed an autonomous, seven-foot-wide robot equipped with a camera, GPS, artificial intelligence, and two robotic arms that apply herbicide when weeds are identified. Being solar-powered, it can work up to 12 hours a day without human intervention. With a weight of 130 kg distributed over four wheels, the robot does not compact soil and can work with more sensitive crops that heavier spray systems cannot. The vision system enables the robot to follow crop rows and detect the presence and position of weeds in and between the rows.

When a weed is located, it is covered by a cup on the end of a robot arm, which then delivers a microdose of herbicide into the cup. The robot adapts its speed to the concentration of weeds and is most effective in fields where the level of concentration is low to moderate, so it can cover the ground at a reasonable speed (about five acres a day). It can be completely controlled and configured using a smartphone app. EcoRobotix has carried out pilot projects in Europe and recently closed on a $10.7-million round of financing. It’s expected to come to market in 2019.

Blue River Technology is developing a tractor attachment that uses robotic nozzles to deliver herbicides to kill weeds. Massive libraries of plant images, computer vision, and artificial intelligence allows the system to identify virtually every plant in the field. It does not rely on spacing or color to identify weeds: it instantaneously recognizes the difference between plants, even under conditions that challenge the human eye. The system also makes adjustments and learns as it goes. In a unique "closed-loop" cycle, a second set of cameras allows it to check the robot’s work as it gathers data on the tens of thousands of plants in each field. The robot has been tested in U.S. cotton fields, is towed by a tractor, and could reduce herbicide use by up to 90 percent, according to the company.

Deere & Co. bought Blue River Technologies for $305 million in 2017. The company’s intellectual property will be a key resource for Deere’s new AI Lab, which will focus on the use of artificial intelligence to help farmers grow enough food for an exploding global population. “What [this technology] allows us to do is move to the plant level, and start managing at that plant level,” says Alex Purdy, director of John Deere Labs. “That’s going to have transformative power in agriculture, both in terms of yield but also in terms of cost for growers.”

What [this technology] allows us to do is move to the plant level, and start managing at that plant level. That’s going to have transformative power in agriculture.Alex Purdy, director, John Deere Labs

The plant-by-plant approach marks a major shift in agriculture from standard mass-spraying methods. Not only does it vastly reduce the amounts of toxic chemicals applied to farmland, it saves farmers roughly 30 percent compared to mass spraying. This creates more room for experimenting with more exotic and less toxic (or even organic) herbicides.

“Because we’re now giving the grower an order of magnitude reduction in the amount of herbicide they’re using, all of a sudden these more expensive, exotic herbicides are now in play again,” says Willy Pell, director of new technology for Blue River Technologies. If continued advances in plant-by-plant weed control result in robots that manually weed plants, the need for herbicide applications will be significantly reduced, or even eliminated.

“Our motivation was environmental in the first place, with the reduction of herbicides, but we would also like to try to make work on the soil look more attractive to the successive generations,” says Steve Tanner, co-founder of EcoRobotix. “In creating this innovative working tool, adapted to the needs of farmers for whom soil conservation is a priority, we likewise aim to demonstrate that high-tech has a place in the agriculture of tomorrow, alongside traditional inherited wisdom. This is not intended to devalue human labor, but makes it less taxing and less hazardous to health, while being sustainable in both ecological and economic terms.”

Article
New 3D-printed Grippers for Short-term Manufacturing Runs
The vast majority of all items manipulated on assembly lines are picked up with grippers similar to tongs or suction cups and aren’t quickly changed out or can’t be used for small products with short runs. New 3D-printed grippers overcome these challenges.
For Further Discussion