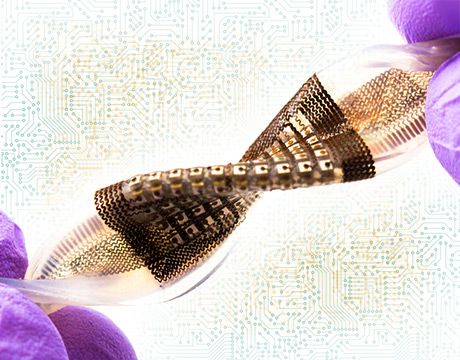 A new patch provides a better way to monitor and diagnose engines, structures, and other objects. Image: University of California San Diego

The twists, curves, and bends of three-dimensional objects make them difficult to inspect. Unfortunately, the flat, rigid ultrasound probes used to find hairline cracks and other problems in engines, turbines, elbows, and knees just can’t make effective contact with parts that bend, twist, or angle.

For that reason, inspectors have a hard time monitoring these parts for cracks and fissures to correct them before they lead to further, even catastrophic, structural problems down the road. Healthcare providers can also have difficulty finding hairline fractures in bones due to limited ultrasound equipment, says Sheng Xu, a University of California, San Diego nanoengineering professor

Researchers at the university, led, in part, by Xu, have developed a flexible, bendable, ultrasound patch that can make it easier to inspect damage in odd-shaped structures. It can be attached to large structures like bridges, engines, and turbines to provide up-to-the-minute information for continuous inspection and monitoring.

You can’t disassemble a bridge or a ship. You can’t take everything apart in the field.Prof. Sheng Xu, University of California, San Diego. 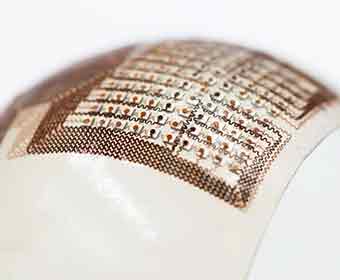 The new ultrasound patch can be twisted and turned to fit over curved and uneven surfaces. Image: University of California San Diego

Such a patch is critically needed, says Francesco Lanza di Scalea, a professor of structural engineering at the university, also a leading researcher on the project.

“Elbows, corners, and other structural details happen to be the most critical areas in terms of failure. They are high stress areas,” he says. “It’s critical we have this capability to monitor and diagnose these noncontinuous surfaces.”

For You: Read the latest about design and manufacturing from ASME.org.

To help provide that diagnostic capability, the researchers created a soft, bendable, stretchable, flexible ultrasound patch that can adhere to odd-shaped surfaces in order to send back feedback about what they “see” inside them, Xu says.

Currently, if a smaller assembly, like a car engine, has a crack in a hard-to-reach location, an operator needs to take apart the entire engine and immerse the parts in water to get a full 3D image, Xu says.

Though gel, oil, or water is currently used to seal the gap between a current ultrasound probe and the surface that’s being examined, the liquids and gels can create bubbles that can filter out signals the probe is meant to receive. The probes are also impractical for inspecting large or hard-to-access structures like a bridge or a ship.

“You can’t disassemble a bridge or a ship. You can’t take everything apart in the field,” Xu says. “It’s critical we have this bandage to make an in-situ diagnosis on something with ridged areas, with cavities and various planes and gaps.

“Otherwise, you need to send a probe down to these areas and that doesn’t work well,” he adds. “This patch will allow us to image the make a nondestructive examination at various kind of places.”

The researchers’ ultrasound device is comprised of a thin patch of silicone elastomer patterned with an array of small electronic parts connected to each other by spring-like structures. The electronic parts contain electrodes and piezoelectric transducers that produce ultrasound waves when electricity passes through them. The spring-shaped copper wires that connect the parts can stretch and bend, allowing the patch to conform to nonplanar surfaces without compromising its electronic functions, Xu says.

The device can transmit visual and technical information to a distant computer, the same way a medical ultrasound can be visualized on a screen, to find cracks and other structural abnormalities.

Flexible electronics today can measure the health characteristics of the wearer. But those devices can only measure and send information about phenomenon that affects the surface where the electronic is affixed.

The device is still at the proof-of-concept stage. The researchers also need to integrate a power source and data processing functions into the soft probe to enable wireless, real-time imaging.

But Hongjie Hu, a materials science and engineering Ph.D. student in Xu’s lab, feels the researcher’s ultrasound patch isn’t too far from being realized.

“It would be neat to be able to stick this ultrasound probe onto an engine, airplane wing or different parts of a bridge to continuously monitor for any cracks,” Hu says.

Read More:
The Chain Gang
MRI-Safe Robots Treat Epilepsy
Take a Spin and a Splash on the Hydro Bike