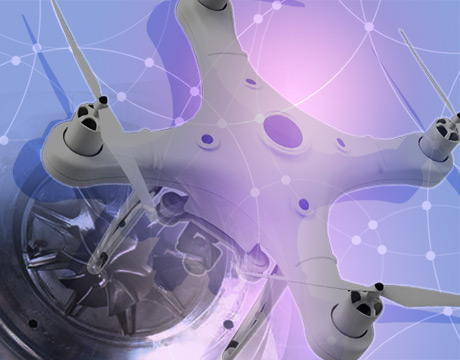 Inspired by those copters, Ransom, director of the machinery department at Southwest Research Institute, saw an opportunity to make a wider variety of unmanned aerial vehicles quieter, more reliable and able to fly longer than current engines allow.

As a result, the company built a small radial gas turbine that powers a small generator that provides thousands of hours of flight to drones. Current drone turbines typically wear out after a few hundred hours. SWRI’s engine is also quieter and more durable than piston engines, and provides more flight time than battery-powered motors.

The fuel-to-electric system resulted from an IARPA-sponsored project to develop an architecture for a quiet unmanned aerial vehicle.

For You: Improving the Internal Combustion Engine

SWRI’s turbine makes a very high-frequency noise that humans can’t hear. It is designed for larger drones used for surveilling different types of equipment. Drones with SWRI’s turbine would be carried around in a trailer and then ground-launched, Ransom said.

The turbine has an efficiency of 20 percent to 25 percent, which is not as good reciprocating engines, which can hit up to 50 percent. But the turbine’s application calls for less noise, not more efficiency.

“By and large, they're not the most efficient machines,” Ransom said. “I wouldn't think of it as a replacement, but as a new enabling combination of technologies that allows you to do quiet flight operations."

Turbines are also more expensive than piston engines, but the simplicity of their moving parts means easier maintenance. The new turbines also run cooler than small turbines currently in use. Those turbines are also constantly exposed to high temperatures given off during the generator’s combustion process. While turbines perform better as they get hotter, the extreme heat eventually damages them.

To solve the overheating problem, SWRI used a new selective laser melting machine (SLM) to build small, intricate airflow passages inside the turbine that cool it without affecting power. The design, Ransom said, yielded a turbine that’s both reliable and high-performing.

Turbines also have an advantage in remote monitoring applications, since gasoline and diesel could be easier to transport and find than a charging station. .

While other engineers are building even smaller micro gas turbine engines, Ransom doesn’t think he could go any smaller with the SWRI turbine.

“What happens is you start to get dominated by the clearance effects between the compressor and turbine and the housing,” he said. “So clearance starts to become quite large compared to the size of the air flow path. That's where you really start to lose efficiency. I think the designs that we're seeing right now in this class is about the smallest practical size for a gas turbine engine.”

For Further Discussion
I wouldn't think of it as a replacement, but as a new enabling combination of technologies that allows you to do quiet flight operations.David Ransom, Southwest Research Institute