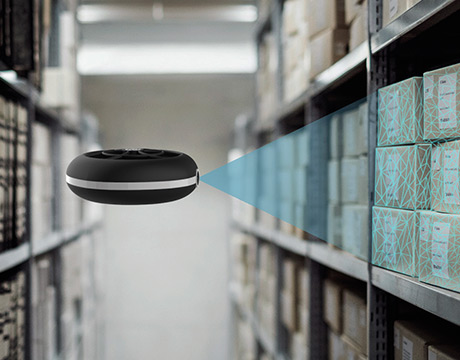 From a young age, Omar Eleryan was fascinated by flight. That fascination continues, but it’s tempered by a critical eye. Today, Eleryan sees weaknesses in current drone designs. Propellers protruding out of quadcopters or tricopters, for example, could be a source of anxiety, frustration, and danger.

“What if I lose control of the drone and hit a dog,” says Eleryan, who is now the CEO of Cleo Robotics. “It could cause some serious injury to someone.” His rethought drone design, "Cleo," is a fat disk small enough to fit in the palm of a hand and fly indoors. Hidden inside Cleo are two propellers—one moving clockwise, the other counterclockwise—reducing the threat of injury and making it safer than quadcopters.

The original idea was to develop something like a flying saucer, but many have called it the “dronut” for its resemblance to an oversized doughnut, Eleryan says. The drone’s size is scalable and could be larger with bigger internal propellers. It’s as agile as a quadcopter in navigation.

For You: Learn more about recent breakthroughs in robotics.

Quadcopters are not meant for indoor applications. That’s where we come in and fill the gap.Omar Eleryan, CEO, Cleo Robotics

Another goal behind Cleo was to make a human-friendly drone that can also roam at street level. That idea has been pursued with algorithms like the University of Zurich’s DroNet that would navigate a drone away from humans. But Eleryan still believes it’s important to keep the propellers hidden to make home and street-level drones a reality.

“Quadcopters are not meant for indoor applications. That’s where we come in and fill the gap,” Eleryan says. Also, one bump in the wall could cause quadcopters to break, and that would be a big investment lost. 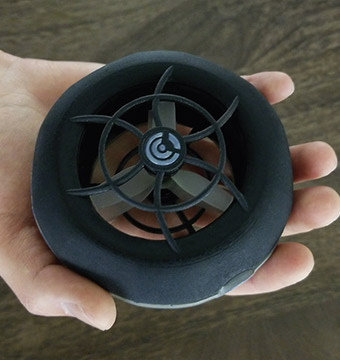 Controlled via a smartphone app, Cleo could have many uses in residences, industries, and warehouses, as well as with law enforcement and first responders. One potential use is security; the drone could be connected to smart home security systems and fly to check out a spot in a home or warehouse if a sensor is triggered. Cleo can broadcast live images to a security company from blind spots that security cameras could miss, Eleryan says.

The drone’s development started with mashups of off-the-shelf parts from hacked quadcopters and tricopters, but the challenge of making a handheld drone soon became evident. The propellers in the initial designs were either too big or too small to lift anything.

After months of prototyping, the Cleo designers hit the right size with custom 3D printed propellers, which provide proper lift. Finding the right parts, 3D printers, and materials were also a challenge. The 3D printed material used for prototyping was the MJP VisiJet Crystal, a translucent plastic used in prototyping of tooling and medical-grade equipment.

The electronics in Cleo are still being finalized, and it still needs a need a beefy processor. In addition to high-definition computer vision, the makers want Cleo to handle artificial intelligence tasks, like image recognition, and pack enough processing power to make smarter navigation decisions.

Algorithms for computer vision and other tasks will be loaded based on a specific application. Cleo has multiple cameras, LIDAR, GPS, Wi-Fi, and a battery life of less than 15 minutes under normal flying conditions.

The final Cleo models will be manufactured, and its materials could vary depending on the application—sturdy materials could be used in more rugged applications. The plan to go to business and government organizations first may be a financially smart decision, given consumer drone companies are struggling. For instance, GoPro shut down its drone operations in January.