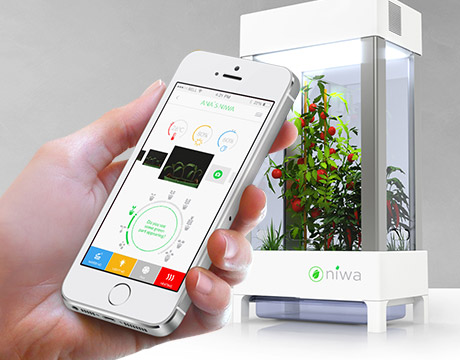 A Green Thumb from a Smart Phone

The joys of gardening are not for everyone. Even those with the greenest of thumbs know that raising a crop in the backyard can be a backbreaking, time-consuming, frustrating experience. There’s the work: hoeing, watering, planting. And then there’s bad luck. A successful crop is dependent on the right amount of sun and rain, healthy soil, and some method of keeping rabbits, groundhogs, squirrels, insects, and disease at bay.

Now, for those who want fresh, homegrown produce without the suffering, there’s the Niwa, a self-contained, hydroponic indoor garden that can be monitored by a smart phone. The system requires next to nothing from its owner. “You have to be home at least once a week to refill the water,” says Zachary Damato, co-founder and COO of the company.

To achieve that level of automation, Niwa relies on four sensors that gauge the humidity, lighting, temperature, and water level, and then adjusts conditions accordingly. Users can take a look at nutrient, water, heat, and humidity levels anytime they like, but they don’t have to do much about them, beyond a click here and there.

For You: Weed-Fighting Robots Could Replace Spraying

Occasionally the app will ask users things like “Can you see any leaves?” and will then modify the environment based on the answer. “It’s for people who are into gadgets, who are hobbyists, and who are running on a tight schedule,” says Damato. It also provides fruits and vegetables throughout the year for those who might not live in appropriate climates, or who don’t have the resources for small-scale farming.

Aside from getting all the pieces of the Niwa to communicate with each other, the chief hurdle to making it a reality was tweaking the heating system. “We didn’t want to have points that were too hot, so we needed a big heating surface,” says Javier Morillas, an engineer and the company’s CEO and other co-founder. “It had to be waterproof and also required different plastic material than the rest of the system to bear the heat without deformation. On top of that it had to be subtle to minimize the impact on the aesthetics.”

Currently, Niwa units come in two sizes, one with a roughly foot-high growing area and one with two. The company sells a “grow pack” with all the nutrients, seeds, and growth medium needed to get started. Of course, not every plant can grow to full size in a two-foot high box. So Damato and Morillas have curated a host of dwarf plants that will grow to maturity in the Niwa system.

Niwa owners are by no means limited to the seeds provided by the company. To a certain demographic, the word “hydroponic” is loaded with connotations that involve the illicit drug industry. Damato says that companies in the hydroponic business “have to choose one side or the other” and that “we are on the fruits and vegetables side.” He is aware, however, that “two guys have hacked it and are growing cannabis.”

Niwa has sold some 400 units in the U.S., as well as 50 in Canada and 250 in Europe. The next version will have more customization and versatility within the app. Damato also hopes to create a community of Niwa users who may want to compete against each other. “It will give them a structure to create a grow program,” says Damato, “gamifying it, in a way.”

But Damato has already met his primary goal: that of giving anyone willing to part with $500 the joy of picking their own tomato and, he says, “learning what it takes to make it happen.”

Read More:
How to Optimize 3D Printing
The Impact of Tariffs on Engineering and Manufacturing
The Comeback of the Aluminum Can

It’s for people who are into gadgets, who are hobbyists, and who are running on a tight schedule.Zachary Damato, co-founder and COO, Niwa