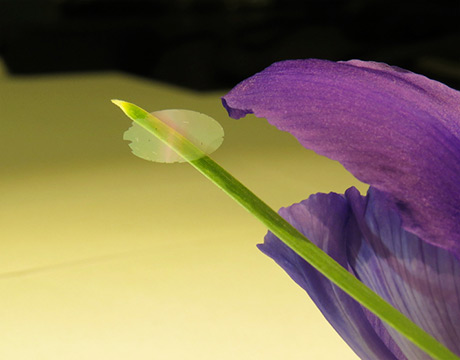 Nanocardboard is made out of an aluminum oxide film with a thickness of tens of nanometers, forming a hollow plate with a height of tens of microns. Image: University of Pennsylvania

Corrugated cardboard is a staple in the packaging industry. It utilizes the standard sandwich structure: two solid sandwich panels separated by a layer of lightweight webbing or lattice. This design provides the optimum combination of low weight and high stiffness. Sandwich-structure composite materials are common across a variety of industries, especially for applications that require those characteristics. But, of course, industry is always look for lighter, stronger materials.

A team of engineers from the University of Pennsylvania has created a new material called nanocardboard that is the ultrathin equivalent of corrugated paper cardboard. Not only is it extremely light weight - one square centimeter weighs less than a thousandth of a gram) - it is an excellent thermal insulator and springs back to its original shape after being bent in half.

The idea came to Igor Bargatin, an assistant professor of mechanical engineering and applied mechanics at the University of Pennsylvania, while he was listening to a presentation on the mechanical properties of the shells of microscopic algae called diatoms. Some of these creatures rely on a sandwich structure to evolve hard outer shells that achieve very high stiffness while using only a minimum amount of material (silicon oxide).

“During the talk, it occurred to me that we should be able to make similar structures using micro- and nanofabrication tools,” Bargatin said.

His biggest challenge was finding a way at the nanoscale to attach the top and bottom sandwich layers to the interior core. “At the macroscale,” he continues, “you can just glue the face sheets and the lattice together, but at the nanoscale, the structures we work with are thousands of times thinner than any layer of glue you can find.”

For You: Is This the Most Wear-Resistant Material in the World?

Bargatin teamed with the university’s Singh Center for Nanotechnology to design a solid silicon template with channels running throughout. The structure consists of perforated sheets and tubes connecting the sheets that exactly match the perforations. Aluminum oxide is then chemically deposited into an ultra-thin nanometer layer over the silicon. Aluminum oxide is used because it is easily deposited using atomic layer deposition, creating a conformal layer with a constant thickness and no gaps.

Once the template is encased, the nanocardboard can be cut to size. After the sides are exposed, the silicon on the inside is etched away. It leaves a hollow shell of aluminum oxide with a network of tubes connecting the top and bottom faces and a thickness of tens of microns.

“This geometry allowed us to create a nanoscale analog of the sandwich plate in a single deposition step, without using any glue, to create the monolithic structure we dubbed nanocardboard,” says Bargatin.

The team’s simulations predicted that distantly spaced circular channels going through the sheets would provide optimal stiffness. However, the results were inconsistent due to wrinkles that randomly formed along the lines between the channels. The team eventually settled on a basket-weave design, featuring close-set, slit-shaped channels arranged in alternating directions. “With this basket-weave structure, potential wrinkles do not meander around the channels, which takes a lot of energy,” Bargatin says. “As a result, wrinkles do not appear in the basket-weave structure at all.”

One of the most surprising properties of nanocardboard is that it can be bent very sharply and then recover its shape, as if nothing happened.

“If you try doing this with corrugated paper cardboard, a crease forms, which becomes a permanent line of weakness,” Bargatin said. “This behavior does not have a precedent in typical macroscopic sandwich plates because the extreme shape recovery is enabled by the same perforations that are necessary to create nanocardboard in the first place, which are missing in conventional sandwich plates.”

Bargatin’s team continues to explore applications that could benefit from the low weight and low thermal conductivity of nanocardboard. “We are looking at microelectromechanical system sensor applications, from new types of probes for atomic force microscopy to resonant gas sensors, which can benefit from the very low thickness of the nanocardboard structure,” he said. Potential also exists as a thermal insulator in thermionic energy converters.

Future work will also explore an intriguing phenomenon: Shining light on a piece of nanocardboard allows it to levitate. Heat from the light creates a temperature gradient between the two sides of the plate, which pushes a current of air molecules out through the bottom. Bargatin is currently exploring a new propulsion mechanism based on the photophoretic forces that cause the levitation. This could lead to new types of microflyers that operate at both atmospheric pressure or at very high altitudes of over 50 km, which is too high for traditional aircraft like balloons and airplanes.

“However, it is too early to speak about applications with any certainty until we can determine the fundamental limits of how large these forces can be,” he said.

For Further Discussion
This behavior does not have a precedent in typical macroscopic sandwich plates because the extreme shape recovery is enabled by the same perforations that are necessary to create nanocardboard in the first place. Prof. Igor Bargatin, University of Pennsylvania

QUIZ: A Look at Manufacturing in China