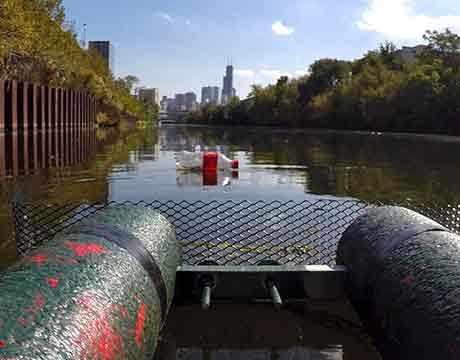 From Heraclitus to Longfellow, from Twain to Muir, the river has been a metaphor for life, a symbol of peace and impermanence, and a reflection of our environment. So it’s no wonder that, to poets and pedestrians alike, the sight of trash floating in our waterways is a source of indignation and disgust.

But unlike the garbage lining our highways that can be collected by a few determined individuals, river trash is harder to remove. Boats are costly, don’t operate 24 hours a day, and can’t get into tight bends and corners.

Urban Rivers, a Chicago-based nonprofit dedicated to improving the quality of urban waterways, has a solution: Get a robot to do it. Piloted by anyone online who wants to take a turn nabbing waterborne junk, their crowdsourced trash bot will soon patrol the Chicago River. 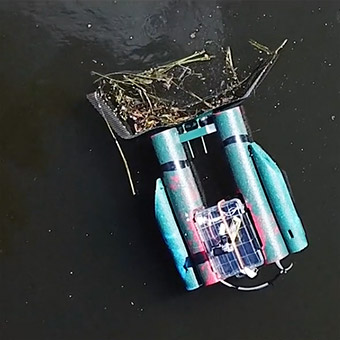 The system can be used not only for collecting trash, but also for wildlife and fish monitoring. Image: Urban Rivers

Awash in raw sewage, trash blown from open dumpsters, and hundreds of “Chicago River jellyfish” (condoms), the river is ripe for such a tool. To attack such detritus, Urban Rivers originally planned to have participants control a robot from the shore.

“We were thinking of doing it like an arcade game,” says Nick Wesley, Urban Rivers co-founder, and the company’s only full-time employee. But the grocery storeat the location they had in mind was less than cooperative about having such a setup on their railing. So Urban Rivers decided to give the controls to the online masses.

Wesley and his colleagues created a proof-of-concept bot, put it in the water, made a video, and started a Kickstarter campaign. With the crowdsourced cash and other funds, they raised enough to build a more functional prototype and get the program going.

For You: Read the latest in robotic breakthrough from ASME.org.

Autonomous trash cleanup would be a godsend for so many things. Nick Wesley, Urban Rivers cofounder

The proof-of-concept bot had a limited battery capacity and a scoop on the business end that was less than ideal. The new prototype has a better battery and a new beak-like tool for gathering garbage. It’s able to pull into tight corners, close down on any refuse found there, and back up.

The biggest challenge, though, is not the collection but the navigation, specifically, getting live video to the online user. “The way we originally had it set up, we had it moving forward and side to side,” Wesley says. “Now it seems the better option is points on a map, so latency becomes less of an issue.”

Remote trash pickers can already sign up to operate the robot, which will make its splash in June, at Urban Rivers. But the work of Urban Rivers doesn’t end when the robot finally hits the water.

“I think the concept is a really powerful idea,” Wesley says. “Once we start to see how this works and how people use it, we can move in a lot of directions.”

One of those directions would to be autonomize the robot. The fun, interactive, video-game angle of the current system would be lost, an army of roving river Roombas, sucking up waste on their own, could quickly and efficiently clean up our waterways. Even then, challenges would exist.

“One of the difficult things is identifying trash,” Wesley says. “How does it know what trash is, what a stick is?”

Urban Rivers is currently working with researchers to solve that problem. Once the current robot has been working for a few months, the organization will have hundreds of hours of video that could translate to artificial intelligences and be used to teach the robot to recognize trash. The technology—all open source—could eventually create a landlubber collector as well.

“Autonomous trash cleanup would be a godsend for so many things,” Wesley says.

Those hours of video—and piles of harvested waste—may eventually help stop trash before it winds up in the water in the first place. Urban Rivers is working with the Shed Aquarium to identify where the trash is coming from so the pollution can be nipped in the bud.

Whether the robot remains an online remote controlled immersive experience or becomes an autonomous trash and data collecting civil servant, the idea is sure to spread wherever there is a yearning for clean water. “It’s only a matter of time, if this works the way we intend it to,” Wesley says.