Is This the Most Wear-Resistant Material in the World?

Is This the Most Wear-Resistant Material in the World? 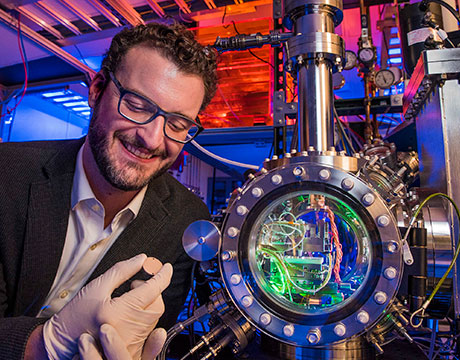 People love gold for many reasons. It’s shiny, valuable, an excellent conductor, and doesn't corrode quickly. Gold is also extremely brittle. But when scientists at Sandia National Laboratories mixed platinum with a little gold, they ended up creating what some are calling the most wear-resistant alloy in the world.

Researchers at the U.S. national lab mixed 10 percent gold with 90 percent platinum and made an alloy that’s up to 100 times more wear resistant than stainless steel, two to three times more than hard-gold metal alloys, and up to nine times more than gold. The new alloy could be used to make new power-generation systems, engines and other equipment that are long lasting and require low maintenance.

"There's nothing intrinsic about platinum or gold alone that drives you to select these like we did,” said Nic Argibay, a materials scientist and researcher at Sandia. “In the right proportion, those two elements could be configured into a microstructure that has remarkable stability."

For You: Engineering Simulation Provides Real-World Design Benefits and Improvements

Past work on how metals wear and the use of alloys in electrical contacts motivated the scientists to look at the relationship between platinum and gold. Their understanding of how metals interact when sliding or rolling against each other led them to design new materials with superior performance. Inspired by research at MIT, which found that platinum-gold belonged to a class of nanocrystalline alloys with thermal and mechanical stability, Sandia researchers began designing clever ways to increase the stability of particular alloys.

“We came to understand that the microstructure and its evolution -- the grain size and how stable the grain size is -- is fundamentally and primarily defining the frictional and wear properties of an alloy when it is rubbing against metal," Argibay said.

Platinum-gold will improve electrical contacts by reducing cost, increasing reliability, and achieving better performance in more aggressive environments, the researchers said. It could also be used as a coating to address tribological and structural issues in gears, engines, and other engineering products. "One impact area we are excited about is next-generation wind turbines that may rely on noble-metal coatings like this to facilitate or obviate the removal of rare-earth metals,” he said. “You may have a direct-drive wind turbine with electrically energized generators. Instead of having to put expensive, heavy and risky rare-earth metals in rotors, we can enable a different route to design next-generation large wind turbines that are equally reliable to what we use today, but much cheaper."

In the short-term, the alloy could be added to blade-pitch motors and communication slip rings used in wind turbines, which wouldn’t need to be opened up and fixed repeatedly. Reduced maintenance costs, along with the longer life of parts, could offset the high cost of the metals.

"Even though it's an expensive platinum and gold alloy, that's a lot less costly now," Argibay said. "You might start considering using platinum and gold in cheaper commercial products if you need a tiny bit of it."

The researchers determined the ratio of platinum and gold that should give the alloy a grain size with better wear properties. The coatings – which were one to two micrometers in size, in line with standard gold coatings -- were synthesized through sputter. The coated steel was put through a friction and wear tester called a tribometer, and connected to a hard, smooth sapphire sphere. Samples were taken after progressively long periods of sliding or cycling wear and researchers determined the volume lost. A host of characterization techniques were also run to see what areas of the microstructure had worn. The researchers also ran molecular dynamics simulations.

For Further Discussion
One impact area we are excited about is next-generation wind turbines that may rely on noble-metal coatings like this to facilitate or obviate the removal of rare-earth metals.Nic Argibay, Sandia