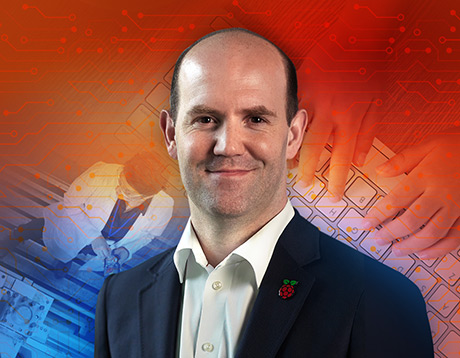 Eben Upton, a Ph.D in computer science, started working on the Raspberry Pi in 2006, and the first $25 device was an instant hit on release in 2012. The board computer, which has reached 21 million units in shipments, has since reinvigorated the maker subculture, spawning drones, robots, industrial automation systems, and even whimsical artistic devices. Upton is the author of several books, has won a handful of awards, and in 2016 was honored as the Commander of the Order of the British Empire. Upton, 40, grew up in the United Kingdom.

What led to the creation of Raspberry Pi?

I grew up surrounded by computers. The first computer I ever touched was a Commodore 64, I had a Timex machine briefly, and then I had a machine called the BBC Micro, which was an educational computer, and then I had a Commodore Amiga. Those were all very programmable computers. When I went to college, I was surrounded by people who had that experience of learning computers and that was great for us. In enough time, those machines disappeared and were replaced by large PCs and unprogrammable computers like game consoles. We founded Raspberry Pi as a way of rebooting a little bit of that enthusiasm and being imaginative. The original ambition was to create a low-cost, programmable, fun hardware that was trying to fill that gap that had been vacated when Commodore 64 and other stuff had disappeared. We benefitted from the existence of programmable computers for kids, and those computers went away, and we started to suffer in the university, as an industry and a country. We thought if we made a programmable computer for kids, we could get back some of what we lost.

How did you turn Raspberry Pi from an idea into a product?

Raspberry Pi is a cost-engineered product. We had a sale price in mind, which was $25, and it was designed backwards from that price. A lot of products are designed forward from a feature set to a price, or maybe you have a vague idea of the price and feature set and try to make it reach in the middle. For us, it had to be a computer, and we had this idea of, 'What can you do with $25?' The bill of materials is dominated by a small number of components: the processor, the memory, and the PCB and substrate it sits on. That accounts for about three-fourths of the bill of materials and 60 percent of the overall end product. The original Raspberry Pi had about 200 components and the current Raspberry Pi has about 300 components. Obviously, optimizing those was very important. We made big choices about what the device could do. We leveraged a standard software stack, we didn’t have to do everything from scratch. We chose very carefully to give us the functionality at the price. You look at big things and make macro-level decisions on what your device is going to do. We got comfortable with the macro-costs involved;then there’s the micro-optimization. We were nearly killed by the micro-costs, you forget the “ten-cent” prices. You have to make some non-functional compromises in your design. You’re squeezing out things that matter a bit less.

For You: Making the 3D Skin Printer Portable

How did you find a manufacturer for Raspberry Pi?

We didn’t find anywhere in the U.K. to manufacture Raspberry Pi a reasonable cost, but we were very lucky to get an introduction to a very good Chinese manufacturer who we used for the first two years. He took a chance on us, gave us a 2,000-unit minimum order at a decent cost compared to a U.K. manufacturer. He did millions in volumes for us over the next two years. We were in the end able to find a U.K. manufacturer and reshore almost all the manufacturing for our core products.

As an entrepreneur, what lessons did you take away from the process of engineering Raspberry Pi?

There’s an attention to detail in hardware. There are no prizes for shipping a defective product. The silicon industry is like that. You can’t patch a chip. If you screwed up, that’s going to be a lot of money going down the drain, and if you sell broken hardware, people get upset.

What has the impact of Raspberry Pi been so far?

I think we’re just getting started. If you make something which works for most customers, then you have something that will work for most companies as well. People find uses for things, and the impact has been very broad. It shouldn’t have been a surprise.

Outside of schools, what’s the impact of Raspberry Pi?

The general-purpose computer has been a success as a product and Raspberry Pi has proven to be a powerful tool not just for students, but for anyone who wants to do general automation of tasks. We’ve discovered there’s a lot more automatable work than we realize. People have been using PCs to automate factories, but the full unit cost has held it back. If you make something that is cheaper, lower power and has a convenient form factor, you can use it natively. The one thing that surprises us is few people know Raspberry Pi.

The use of Raspberry Pi has expanded to drones and robots. Where do you expect it to go?

In the context of Industry 4.0, Raspberry Pi is enabling new forms of automation by bringing high-performance, stable, robust general-purpose computing to lower price points. Engineers have used the product to automate a wide range of tasks, and as the core of their own products, including robots and drones. People using Raspberry Pi for general factory automation are also building platforms around it. People are buying Raspberry Pi as part of pre-integrated industrial solutions.

Speaking of robots and drones, where do you expect Raspberry Pi to go?

The drone thing is very interesting -- the Raspberry Pi is very good at imaging, processing data from cameras. Pretty fascinating to me recently has been use for intelligent agriculture in California, which is in the middle of a massive drought. You can do infrared photography which will allow you to identify in a field which plants need irrigation. That’s a much more efficient use of water and human time. We’re discovering new themes that are automatable. I like the whimsical ones -- there are a lot of art installations using Raspberry Pi as a controller. People are using Raspberry Pi for vision capabilities in robotics.

Raspberry Pi reinvigorated the maker subculture. What benefits do engineers get from being a maker?

Engineering is a creative discipline, but engineering has an image problem.The reputation problem is simply that engineering is sometimes viewed as an uncreative, low-status profession -- like an engineer being the person who fixes your boiler. By emphasizing the creative, entrepreneurial aspects of engineering practice, "making" may help to address this.

What’s your advice to engineers?

Don’t ask for permission. I didn’t ask for permission to do Raspberry Pi, I just did it. I never regressed after that. Persist because innovation’s hard. I started developing Raspberry Pi in 2006, and I didn’t come out with the first one which was any good until 2010 and didn’t allow it to market until 2012. There was a lot of persistence across Raspberry Pi. Even when you do the right thing, things always take twice as long than you expect it to. Surround yourself with people who help you persist in your professional and personal life. I kept doing Raspberry Pi because my wife felt it was a good idea. For a time, I thought it wasn’t a good idea.

Listent to ASME TechCast: In our first episode, engineer Roma Agrawal talks about her new book and the need for a diversified workforce.