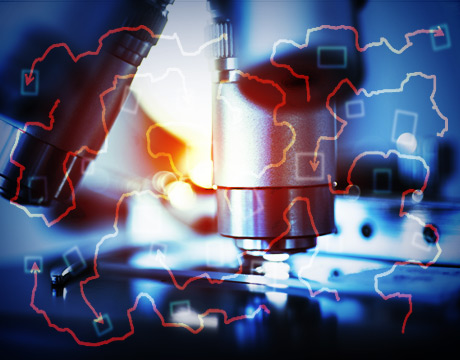 Robots of the macro sort abound. Factory floors are strewn with them, toy stores are stocked to the gills with them, and soon, we’re assured, they’ll be serving us coffee and checking us in at the airport. At smaller scales, though, autonomous machines are scarce. They don’t yet deliver drugs to precise locales in the body, they don’t build microscopic factories, and they don’t know where to go or how to get there.

But MinJun Kim, until recently a professor at Drexel University’s Department of Mechanical Engineering and Mechanics and now at Southern Methodist University, is fixing all that. Thanks to him, robots far too small to see with the naked eye may soon be making our medicines, taking them where they need to go, and—who knows—waging war against the micro bots our enemies have unleashed upon us.

For several years now Kim has been slathering microscopic surfaces with bacteria and letting them scurry around. “We just harness the bacteria onto the bottom of micro-fabricated structures,” he explains. “The bacteria have their own flagellated motor embodied onto the cell body, which enables the structure to self actuate.” In addition to the locomotion they provide, the bacteria also act as a lubricant. “Without this monolayer, the structure cannot smoothly move around the substrate, because of friction.”

That’s how you get a microbot to go. But how you get it to go where you want it to is another story.

The bacteria happen to have a negative charge to them. Kim was able to change their direction by applying an eclectic field to the robots environs. By using an algorithm, or simply tapping keys on a keyboard as if playing a video game, researchers are able to steer the robot to wherever they might want it to go. But to be of any use, the amoebic automaton must ultimately be autonomous, capable of navigating around potential obstacles without an external guide.

This year Kim figured out how to get the flagellators to do just that. Obstacles within the electric field disturb the electric field and Kim was able to use this deformation to keep the robot from colliding with anything in its path. “So when our bacteria-powered micro robot came close to the static obstacle, the speed would change.” The technique allowed Kim to steer the bot—or the bot to steer itself—between two slightly larger squares and around a micro lozenge before arriving at a predetermined goal. The robot is able to get to its finish line on 80 percent of the journeys it takes.

What to do with such successes? At the moment, the robot will not be providing any goods and services within the body, “because of the bacteria,” says Kim. “Even though we are using genetically modified bacteria—who knows, they have mutations.” So, for now, the microbots drug delivery assignments will be strictly in vitro, maybe to stem cell colonies. In the area of single cell manipulation the bacteria powered robot far surpasses current technology—at least in terms of dents to a budget. At the moment anyone wanting to separate the dead cells from the living cells in a cell colony, would need a $150,000 instrument. The bacteria-powered microbot, says Kim, could do the same task for about $1,000.

Should the microbot ever go in vivo it could break up blockages, clean arterial walls, deliver drugs to specific spots, attack tumors, and dodge white blood cells all the while. And, perhaps most important for the imagination, “We can definitely achieve swarm control,” says Kim.

If Kim’s research proceeds apace, the next revolution in medicine may be bacteria powered.

Learn about the latest trends in bioengineering at ASME’sNEMBConference.

For Further Discussion
The bacteria have their own flagellated motor embodied onto the cell body, which enables the structure to self actuate. Prof. MinJun Kim, Southern Methodist University