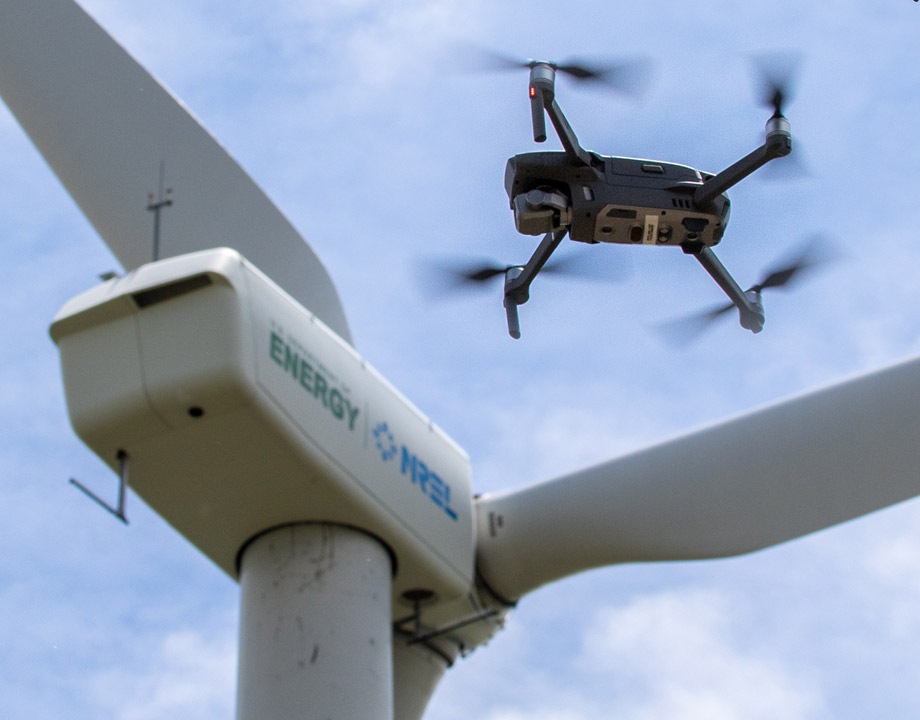 Researchers use drones to fly into swept area of a wind turbine to mimic bird flight. Photo: Werner Slocum, NREL

4 Ways to Make Wind Turbines Safe for Birds and Bats

As costs continue to fall and utilities and developers look more to renewable sources of energy, the installation of wind turbines in the U.S. dramatically increases. According to the American Wind Energy Association, wind-power projects have more than tripled over the past decade: more than 57,000 wind turbines with a combined capacity of almost 100,000 MW now operate in 41 states and two U.S. territories.

One downside to wind power’s success, however, is its impact to wildlife. Birds and bats in particular can be killed by turbine blades.

The Audubon Society estimates wind turbines kill up to 328,000 birds per year in North America, a number expected to grow as more wind farms are built.

The U.S. Department of Energy’s National Renewable Energy Laboratory is exploring systems and methods to lessen the impact through its Technology Development and Innovation to Address Wind Wildlife Operational Challenges program. 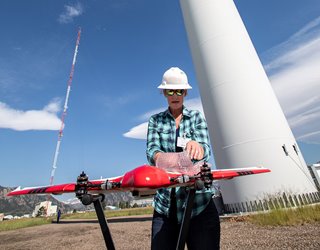 Researcher prepares unmanned aerial vehicle that approximates the size and flight of an eagle. Photo: Werner Slocum, NREL
Bats may mistake turbine towers for tree silhouettes and approach in their nightlong search for insects. Some research estimates more than one million bats already have been killed by turbine blades.

Further Reading: Two for the Price of One: Offshore Wind and Marine Power Platform

To potentially remedy the problem, a U.S. Geological Survey scientist is leading a project to illuminate the turbines with dim ultraviolet light. The light is not visible to humans or birds, but research shows that bats recognize it.

Two utility-scale turbines at Flatirons have been fitted with 12 UV lights to see if bats are affected. Data is being collected by thermal video cameras that monitor bat and insect activity at the tower and within the rotor swept area. 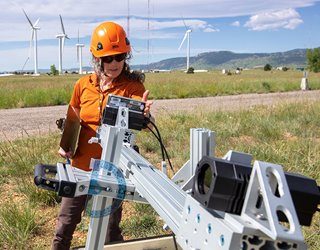 Shari Matzner of Pacific Northwest National Laboratory prepares Thermaltracker cameras. Photo: Werner Slocum, NREL
Wind energy now accounts for about 6 percent of the power generation in the U.S., and is growing. But developers are concerned that impacts on wildlife will potentially lengthen the permitting process. One project to further understand how and when wildlife approach turbines is being done in association with Pacific Northwest National Laboratory.

The lab’s Sheri Matzner began developing software based on thermal imaging to identify birds and bats and their movements around wind turbines and this year began validating the software using NREL’s turbines.

The software can detect animals’ presence and now the team is enhancing the software for more precise identification and tracking. A stereo pair of cameras was installed on the very top of the turbine to estimate the distance to an object. That allows the team to develop further information on the speed of the object and its size, two basic facts for identifying a species.

Adverse weather affected testing earlier in the year but allowed the research team to identify some problems. That led to what they called a successful test phase over the summer and a two-month test that followed.

But the amount of data generated was so great it was not feasible to record and store all of it. Researchers altered the system to store only data from wildlife events. Physically, the prolonged test exposed the system to a variety of weather conditions. The ultimate goal is to use it to monitor wildlife at offshore wind stations and manage interactions with the machines. 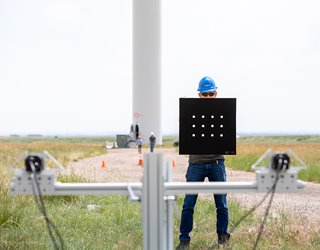 Another USGS project is investigating how to use the U.S. weather radar network known as NEXRAD. The network already provides data on the presence of flying animals available free of charge.

A portable radar network has been installed at NREL to corroborate data from nearby NEXRAD stations and link with thermal video observations to index bird and bat movements.

4. A Good Look at Eagles

Oregon State University researchers went to the Flatirons campus in the summer to test their ideas in the Eagle Take Minimization Project, also funded by the Department of Energy.

They installed a far-field imagery camera on top of a turbine to provide a view from which raptors or other species might approach the machine. It has a 360-dgree field of vision along a horizontal axis and 180 degrees of vision along a vertical axis. That allows the system to detect practically anything, validated by flights using a drone that approximates the size of an eagle, flying from a variety of directions.

You May Also Like: 5 Technologies to Bring a Quieter World

To simulate collisions with the turbine blades, the team installed a camera on the blades that is triggered with a contact microphone and accelerometer. The camera saves video footage of a few seconds before and after the collision. Researchers tested the system by shooting tennis balls at the blades from a worklift.

Scientists hope the data will help refine their software algorithms and aid sensors to distinguish between normal turbine movements and bird and bat encounters, allowing a higher confidence in other technologies being evaluated. It also should provide a better count of the number of species that come in contact with the turbines and how they navigate when confronted with one.

An earlier project with Auburn University used two eagles rescued and trained from the school’s Southeastern Raptor Center to fly through avian detection systems using radar and a stereoscopic camera system. The birds were trained to fly at low levels and are commonly used to fly across a stadium and land on the arm of a handler, rather than soaring as eagles do in the wild.

The birds were released from a lift and flew at various angles and heights where the systems monitored their movements. The goal was to allow system developers to improve analysis methods and identify the limits of the systems.