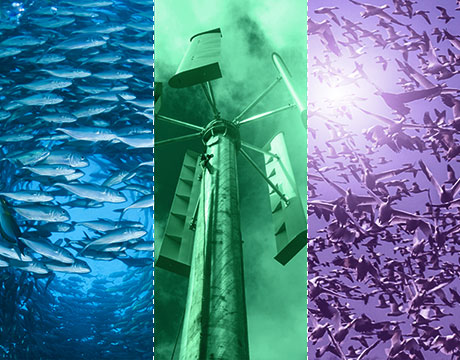 John Dabiri may not be able to talk to the animals, but, in a way, they’ve started talking to him. He realized that the kind of flowing motion birds in flocks and fish in schools summon might just be applicable to the world of wind turbines.

“Big questions ultimately included: ‘How will wind do when a turbine isn’t next to an open field but next to a building?’” says Dabiri, who was teaching at CalTech when he was first inspired. He is now a professor of mechanical, civil, and environmental engineering at Stanford University. “The work early on, as it often does, involved doing a computer model. The numbers were promising.”

It might seem strange to contemplate that grouping things close together would work for turbines. After all, conventional thinking for turbines holds that they should be set far apart to avoid the airflow being influenced by other wind turbines. The theory holds that this preserves the performance of the downwind turbines. Dabiri believes there is power in numbers.

“We noticed birds or fish are contending with the fact that neighboring birds or fish are disturbing the air or water,” he says. “Rather than spreading out as far apart as possible, they align themselves in pretty regular geometric patterns, such as staggered formations. What they’re doing is finding locations in the area around their neighboring animals where the flow that’s created by the neighbor can actually improve their performance.”

“There are regions to the side of the turbines where the flow actually accelerates as it passes around the blades," he says."It shows you can put a second turbine in those regions of accelerated flow. In those cases, even though a turbine might be farther downwind from an upstream turbine, the downwind turbine can actually produce more power than the upstream turbine by taking advantage of those flow acceleration effects. So that local acceleration of the flow is one distinction between the vertical axis and the conventional horizontal.”

Another distinction, he says, is in how quickly the wake recovers. “Even in that region behind the vertical access turbines where you would get decreased wind speed, it tends to recover,” he says. “The winds tend to increase back to where they were before the wind turbine [influenced them] over a much shorter distance. Again, you can put the turbines much closer together than you could in the conventional horizontal axis systems.”

Because there is a handedness to the rotation, that rotation can allow the wind to be steered as it passes through the wind farm, he says.

Turbines were tested on land purchased by the school Dabiri was later teaching at, Stanford. “That land became a good spot to set up wind turbines to see what was there,” Dabiri says. “Now we were getting more of a sense of the possibilities.”

The stage for Dabiri’s current work has moved to the Alaskan village of Iguigig, which is about 70-people strong and has a need for improved energy, he says. The turbines there are only six feet high, to make them easier for the local population to maintain, he says. “Keep it simpler,” he says. “They’ve been patient with possible problems and are committed to this. This is another important step.”

For Further Discussion
What they’re doing is finding locations in the area around their neighboring animals where the flow that’s created by the neighbor can actually improve their performance.Prof. John Dabiri, Stanford University