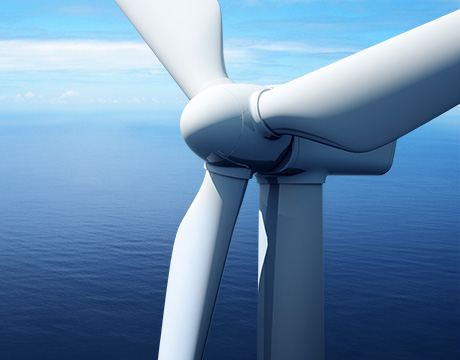 Two for the Price of One: Offshore Wind and Marine Power Platform

One of the ways to slash the cost of offshore wind—especially as turbines move to deeper waters—is to develop more cost-effective platforms to tether large wind towers to the deep. Houston-based Excipio Energy has not only improved platform design, but found ways to harvest additional energy from ocean currents, waves, and changes in temperature.

“If you’re going to build a floating platform, you want to hang as much jewelry on it as you can to improve the system economics,” said Roy Robinson, Excipio Energy CEO. “These are expensive platforms once you consider the costs of the engineering, installation, insurance, and construction. But the incremental cost of adding on these different technologies is quite small—and can help make it more economically viable.”

Robinson, who started out as a mechanical engineer, and Georg Engelmann, the company’s chief operations officer, each have 25 years in offshore energy. Since 2016, they have been studying offshore wind, earning what Robinson called “the equivalent of a Ph.D.” in the subject. Along the way, they leveraged their team’s experience with offshore technology, engineering, and manufacturing to design their Excibuoy platform.

Excibuoy consists of a 60-by-60-meter steel platform with four foldable spar legs, which provide floatation and ballast. This allows contractors to fabricate, integrate, and precommission the platform in port, then tow the platform to its destination on the floatable spars from ports with only 40 feet of draft. Once positioned, the spars unfold to provide stability.

Building the platform entirely in port, without adding the wind tower at sea, significantly reduces commissioning costs. Based on test tank modeling, Excipio projects that its four spars, when extended and anchored to the ocean’s bottom, will improve stability and reduce deflection of the turbine tower by 50 percent for the same sea state over conventional one-spar designs.

Once deployed, the platform’s angular stability lets companies harness offshore wind through a tower and turbine. That’s the most obvious power source.

The design is fully scalable to any payload distribution and there is no limit—at least theoretically—to tower size on the platform. “It may sound simplistic, but all you have to do, if you want a bigger wind turbine, is make the hull bigger,” Engelmann said. “And in terms of stability, as soon as you get out into deep water, with the spars lowered, it’s completely stable even in hurricane conditions.”

Read more about Renewable Energy: U.S. Can Learn From Texas’ Surge in Wind and Solar Power

Engelmann said that much of the platform’s value comes from its ability to offer multiple energy capture formats.

“So much of the technology involved in renewable energy conversion works great in the right environment,” he said. “The physics, the engineering, and the power principles all work great. But it’s the cost of bringing these platforms to market that gets in the way. By bundling all these technologies into a common hosting structure, we could eliminate a lot of the fixed costs, making it a lot more cost-effective.”

The Excibuoy is flexible enough to accommodate several different renewable energy technologies, as well as new ones as they become available. In addition to conventional wind towers, these include oscillating water column wave capture, ocean thermalenergyconversion (OTEC), and current flow turbines.

The design can generate electricity through OTEC devices. These devices work by using ocean surface temperatures to vaporize a working fluid with a low boiling point (like ammonia), which expands and drives a turbine to generate electricity. The vapor is then returned to the ocean floor, where cooler temperatures turn it into a liquid. According to Excipio, this will work with surface-bottom temperatures differences of 20 degrees Celsius.

Read more on Emerging Energy Technologies: Storing Heat from Nuclear Power Plants Could Improve Output Another design concept involves using spars for oscillating water column wave capture near the surface, where waves would move pistons within the spar up and down. Flow turbines under the spars and the platform itself could capture energy from currents.

“We expect it to be more stable than any other platform in the business—and that it will allow us to efficiently capture wave and current energy while supporting the wind plant,” Engelmann said. The platform is also flexible enough to easily replace obsolete devices or add new types of renewable energy converters as they become available, he added.

Robinson conceded that offshore fixed wind technologies, on the whole, remain more expensive than those found onshore. And, certainly, gas power is also fairly cheap. But he believes, in the long run, offshore wind will more than demonstrate its worth.

“This has the potential to create massive amounts of cost-effective electrical power,” he said. “By developing multi-mode floating offshore energy generators, we can reduce the unit cost of power generation to a point that is within reach of the utility grid market.”

Kayt Sukel is a science and technology writer based outsideHouston, Texas.

Register today for ASME’s Offshore Wind Summit to learn about the latest technologies, opportunities, and supply chain strategies from leaders in the oil, gas, and wind energy industries.

If you’re going to build a floating platform, you want to hang as much jewelry on it as you can to improve the system economics.Roy Robinson, Excipio Energy