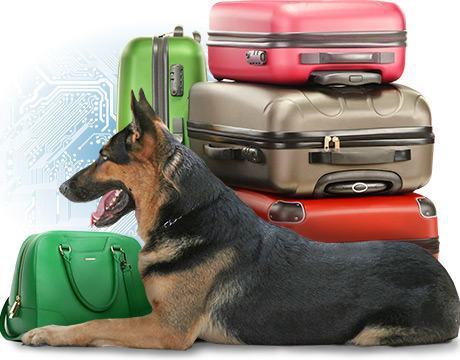 Bomb-sniffing dogs will be mingling with airport passengers for a long time to come. The specially trained K-9s are still, by far, the best way to detect the presence of explosives. But their training tools haven’t always been up to the dogs’ keen scent-detection capabilities.

“A dog’s olfactory system is incredible, nothing we could create would equal it,” says Alex Gash, a chemical researcher at the Lawrence Livermore National Laboratory.

But the K-9 community needs better training tools with more variety in both shape and chemical signatures and without the residual scents that may throw dogs off, he says. With that in mind, the lab has developed a 3D printing system that improves a dogs’ ability to detect explosives in airports, post offices, and other places.

For You: New Process Embeds Coded Data on 3D-Printed Parts

K-9s typically learn to detect explosives by sniffing trace explosives that make up about 8 percent of a plastic substrate. At such small numbers, the chemicals won’t react with each other, which is the cause of an explosive detonation. Because so little of the material is comprised of explosives, the training tools can be shipped by regular means, which is easier for trainers, Gash says.

While easier to move, the training aids—many of them originally developed by the lab about 30 years ago—do have drawbacks. The dogs may be inadvertently trained to detect the scent of the plastic rather than the explosive, for example. The trace explosive may not be uniformly dispersed throughout the material, raising the chances the dog will be trained to detect the wrong chemical signature, Gash says.

Also, today’s K-9 training tools are mainly focused on getting the dogs to sniff out military-grade explosives, which are single-molecule explosives, he adds. But homemade denotation devices have become of greater concern over the past several decades, he adds.

Also, conventional training aids are usually presented to the dog as a powder or gel, so they don’t help the dogs recognize certain shapes, like a cell phone, that can contain disguised explosives.

It was obvious to John Reynolds, a chemical researcher at the lab’s Energetic Materials Center, that the bomb-sniffing dogs needed new tools in their training arsenal.

With that in mind Reynolds, who has a long history with the lab’s K-9 training tools, headed a group at the center that came up with a way to print 3D objects that contain trace amounts of explosives but that don’t contain distracting vapors from other substrates, says Gash, who is part of the team.

The system can print 3D objects that can contain trace amounts of nonreactive explosives within materials like ceramics that don’t give off a chemical scent. Printing objects with those materials wasn’t possible before, Gash says.

“If you create a simulant mixed with the ceramic you can be confident the dog is smelling the chemical explosive and not an inert material,” Gash says.

Beyond explosives, the technology could produce aids for dogs learning to detect narcotics, chemical weapons, or other illicit materials.

With the additive method, researchers can combine explosives with other substrates, such as plastic or clay, to simulate the materials that homemade explosive devices may contain. They can then print those material combinations to present to the dog.

The 3D-printing method can also sandwich fuel and oxidizer layers between inert layers to prevent a reaction but to still present dogs with an accurate explosive signature. Lattice structures such as base-cement, previously not used in the field, can now be made into training aids to present dogs with a strong tool that can keep explosive chemicals separate within a strong material to ensure they don’t mix, Gash says.

Of course, the chemicals are still present in very small concentrations.

Reynolds knows about the ongoing needs of the K-9 explosives community, as the lab has a long history of K-9 explosives detection research and development. It developed its Non-Hazardous Explosives for Security Training and Testing (NESTT) three decades ago. The tools have been commercially available for nearly two decades.

NESTT has done away with many of the problems previously associated with the storage, transportation, and use of actual explosives in public places, such as airports, Gash says. With NESTT, the dogs learn to detect explosives in the environment where they’ll eventually be working.

The ability to train in realistic environments has increased the effectiveness of explosive detection instruments, according to Reynolds.

The team is now working to test the tools with K-9s and handlers. Ultimately, the researchers’ ultimate goal is to get approval from federal agencies like the Department of Homeland Security and the Transportation Security Administration to use the 3D-printed training tools in the field.

A dog’s olfactory system is incredible, nothing we could create would equal it.Alex Gash, Lawrence Livermore National Laboratory