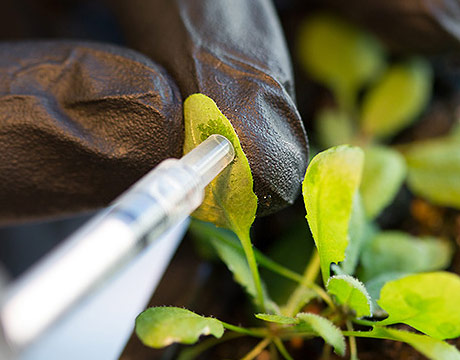 The researchers infuse the leaves of an Arabidopsis Thaliana plant with nanoparticles. Image: Bryce Vickmark / MIT

After years of talking to our plants, it looks like they’re finally able to talk back. MIT researchers recently transformed the leaves of spinach plants into sensors that can detect explosives and other dangerous chemicals in the soil and air, and transmit the information to a smartphone.

Plants are self-repairing, cheap, abundant, and can withstand the elements, which makes them a less expensive and more efficient platform than man-made solutions for certain outdoor applications. They also contain a tremendous amount of information about the environment, and they can use their root systems to help detect chemicals dissolved in groundwater, said Michael Strano, a chemical engineering professor at MIT.

“We’re showing how we can get information from a plant’s root system to your cellphone,” Strano said. This plant-to-human communication is the latest phase in Strano’s research in plant nanobionics, a new field that the group has pioneered. “The vision is to try to replace the electronic devices we mass produce with comparably functioning plants,” he said.

Two years ago, the researchers began engineering different types of plant leaves to detect a variety of chemicals, such as TNT, sarin nerve gas, and hydrogen. They embedded leaves with fluorescent carbon nanotubes that had been coated with a polymer.

When molecules of the targeted chemical bind with the polymer, the nanotubes emit a different color of fluorescent light, which the researchers detect with an infrared microscope or camera. Next, the group gave the bionic plants wireless communications capability, they reported in October in Nature Materials.

They did this by embedding spinach leaves with polymer-coated nanotubes engineered to detect chemical compounds called nitroaromatics, which are used in landmines and other explosives. After the nitroaromatics are introduced into the soil, they travel through the plant’s roots to its leaves in about ten minutes.

The researchers then shine a laser on the leaf, causing it to emit near-infrared fluorescent light, which they detect with an inexpensive camera connected to a $35 Raspberry Pi microcomputer. The microcomputer transmits the signal to a smartphone, which can pick up the signal from about one meter away.

The researchers are working now to extend that range, and they have filed a patent on the technology. One of the paper’s lead authors, Win Hao Wong, has started a company called Plantea to develop and market the plant bionic technologies, which potential customers are already inquiring about, Strano said.

The bionic plants—Strano’s team also experiments with arugula and watercress—could be planted around chemical, nuclear, or fracking sites to monitor leaks, spills, and security threats, Strano said. They could also detect insect attacks on plants or to predict a drought or other environmental conditions.

Other technologies exist to detect such problems, but many of them are expensive and cumbersome, Strano said. “This is about decreasing the amount of work involved and lowering the economic footprint.”

But one thing you can’t do with the nanotube-embedded plants is eat them. Now you finally have a good excuse for refusing to eat your spinach.

We’re showing how we can get information from a plant’s root system to your cellphone.Prof. Michael Strano, MIT