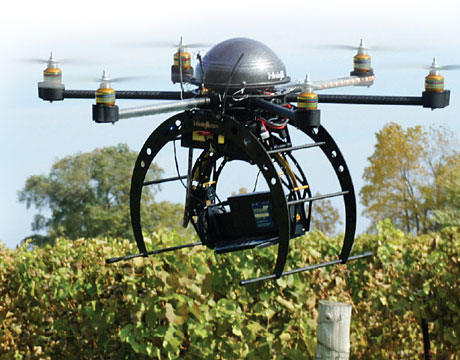 Bug Off My Guacamole

Guacamole has been popular for a long time—well before there was even an orchard in Florida: The name has been handed down to us from an Aztec word that means “avocado sauce.” In the U.S., football fans go through about 8 million pounds of the stuff each Super Bowl Sunday.

But in Florida, the No. 2 avocado-growing state, a deadly fungus is attacking the avocado trees. The fungus, carried by redbay ambrosia beetles, causes a vascular disease called laurel wilt; more than 90 percent of trees die within six weeks of infection. The infection has killed about 9,000 trees in the past three years, out of approximately 700,000 trees in the state.

A team at Florida International University, however, has developed a detection program involving drones and dogs to help counter the spread of the fungus.

Ty Rozier, owner of a company called Elevated Horizons LLC, operates the drones. Each drone carries a modified Canon Sure Shot camera with filters that will capture images in the near infrared and other wavelengths. The drones are given flight plans through an iPad and, although they are automated, remain in sight of the pilot.

Multi-rotor power systems can give the drone more than 30 minutes of flight time and lift up to 10 pounds of equipment, Rozier said. The model that is used was manufactured in 2013 by a company called Infinite Jib in Ontario, Canada. The drones can cover about 5 to 10 acres in about 15 minutes, flying above the trees between 50 and 200 feet in the air to capture data.

The images recorded during the flights allow for the calculation of a “vegetation index.” The object is to spot differences in chlorophyll content and densities that distinguish stressed trees from healthy trees. The data is analyzed, and once the researchers see a tree that appears stressed, they can bring in dogs trained to detect the odor of the disease pathogen.

The team has one Belgian Malinois named Cobra and two Dutch shepherds named Candy and One Betta. If the dogs find that a tree is infected, it will be removed so it does not serve as a reservoir for the pathogen.

Mills said that she and her colleagues came up with this interdisciplinary project from each of their areas of expertise. “As a team of researchers, we have a higher probability of being able to stop the spread of the disease until they can find a solution/fungicide that will stop it,” she wrote in an e-mail. “The inspiration came from seeing the avocado trees dying within the growing area and knowing how the loss of this agro-industry would impact the local and national economy.”

The fungus can also spread to surrounding trees via the roots, without inoculation by beetles. When a diseased tree is identified and removed, the common practice is to treat neighboring trees, if they appear healthy, with a fungicide that can prevent infection, although it is not a cure. View the current and past issues of Mechanical Engineering Magazine.

For Further Discussion
The inspiration came from seeing the avocado trees dying within the growing area and knowing how the loss of this agro-industry would impact the local and national economy.Prof. DeEtta Mills, Florida International University