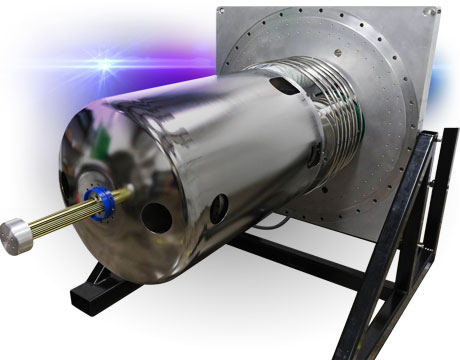 One of the greatest threats to ground troops today is improvised explosive devices (IEDs). Methods used for detecting these devices are low-tech, dangerous, and time-consuming, often relying on visual identification or explosives-sniffing dogs. Therefore the U.S. military is eager to find a reliable technology that can detect these devices from a distance and alert moving troops, before they arrive at the IED location.

Any effective solution must be portable, reliable, durable, and extremely sensitive at a large standoff distance. Neutron-based, explosive-detection technologies have been tried in the past. However, due to relatively weak neutron source strength, detection standoff distances have been limited to one meter or less.

Thanks to the development of a high-voltage, nuclear fusion-based particle accelerator technology by Phoenix Nuclear Labs (PNL) in Monona, WI, this standoff distance has now been extended to 30 meters, with a high degree of accuracy. If widely deployed, this detection technology will save thousands of military and civilian lives.

The detection technology is based on a neutron generator that is 1,000 times stronger than conventional accelerator-based neutron generators.This is achieved by accelerating deuterium at 300,000 volts into a gaseous target to generate nuclear fusion reactions.“Key features include a microwave-based electron cyclotron resonance (ECR) ion source, electrostatic accelerator, and differential pumping system that utilizes multiple gas-pumping technologies,” notes Ross Radel, president of Phoenix Nuclear Labs.

Called NEMESIS (neutron emitting mobile explosives sensing and identification system), the device can generate steady state neutron production as high as 1014 neutrons per second. The broad energy spectrum allows the determination of all key nuclear elemental signatures: nitrogen, hydrogen, oxygen, carbon, silicon, and iron. Using a very intense neutron source solves many of the challenges that face neutron generators, such as false-positive responses to silicon, wet soil conditions, and background detection of nitrogen in air. Neutron time behavior and active background leads to efficient multi-tier decision process with a probability of detection of greater than 95% and a probability of false detection of less than 5%, in operationally relevant time frames.

The high-flux neutron generator is mounted to a vehicle at head of the convoy, emitting a pulsed neutron beam in the direction of travel. When the neutron beam interacts with a hidden IED, the explosive materials in the IED emit characteristic radiation signals that are detected either by the lead vehicle. Explosive materials have a unique chemical composition (including especially high levels of nitrogen and oxygen) that distinguishes them from other materials. When nitrogen is hit by neutrons, it emits high-energy gamma rays that can be detected by simple radiation detectors. Detecting these gamma rays is what identifies the presence of an IED.

“Because NEMESIS directly detects the explosive material itself, rather than the metallic bomb components, the so-called ‘detection-proof’ bombs that are made without metal, wires, or electronic triggering mechanisms are just as easy to detect as any other bombs,” says Radel.“The technology is as effective for homemade, fertilizer-based explosives as it is for advanced military explosives.”

This technology can also detect special nuclear material (SNM) like uranium-235 or plutonium, which can be used to make nuclear weapons. Passive detection technologies do not work well for SNM because fissile material is weakly radioactive and easy to shield. However, fissile materials do emit intense bursts of neutrons and gamma rays when bombarded with neutrons, which means they can be easily detected with NEMESIS.

“We’ve known for some time that certain types of improvised explosive devices can potentially go undetected through existing scanners that use X-rays,” says Radel. “The beauty of our system is that it can detect unconventional explosives, such as homemade explosives, that might not be caught by existing security infrastructure.”

Phoenix Nuclear Labs is also using its core neutron generator technology for other applications, such as neutron radiography (an analog to conventional X-ray radiography) and quality assurance applications for military, aerospace, and composite material components.The core neutron generator is also being used by SHINE Medical Technologies to produce medical isotopes. Radel is also eager to use the technology for humanitarian missions, such as clearing land mines, which kill 15,000 to 20,000 people every year.