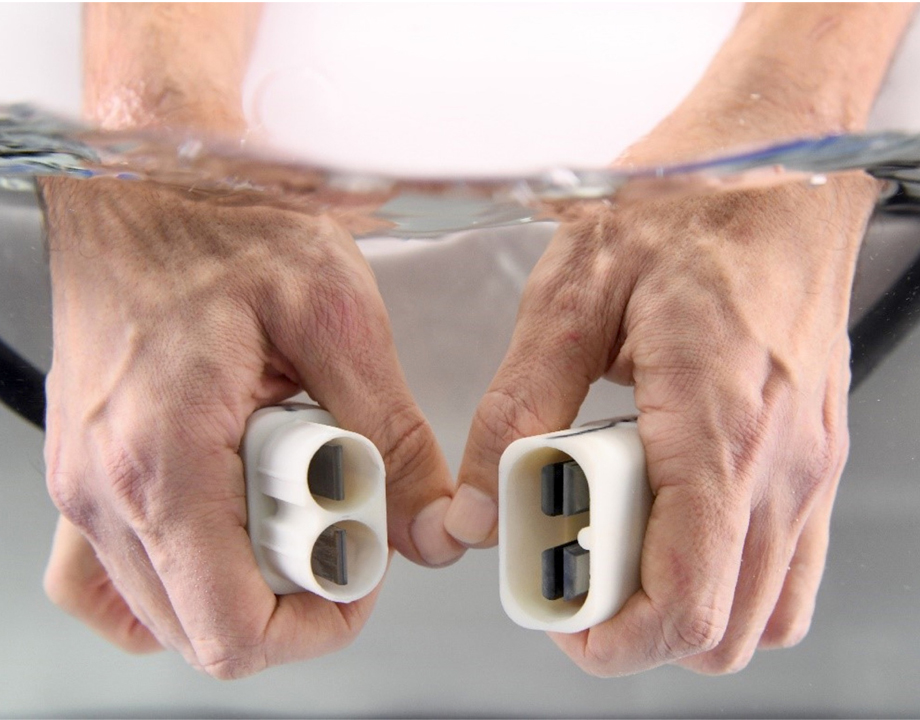 Thanks to researchers at Northrop Grumman, a simple new connector allows a live wire to be submerged in water without corroding or risking shock to whoever might be handling it.

Electric Power Ocean, Offshore and Arctic Engineering Technology and Society Water Transportation
Underwater remote-operated vehicles have been a boon for offshore oil rigs, marine biologists, and sea and water-based industries of all kinds, inspecting and repairing, in situ, where it would be unsafe and expensive to send a human.

But untethered seafaring robots, like their surface-dwelling brethren, need to recharge when they run out of juice, not an easy task when submerged in the corrosive environment that is the sea.

As any child who has been told not to put a plugged-in gizmo in the bathtub knows, electricity and water don’t mix. Coming to the surface to charge, though, costs time, energy, money, and manpower.

But now, thanks to researchers at Northrop Grumman, there’s a simple new connector that allows a live wire to be submerged in water without corroding or risking shock to whoever might be handling it. 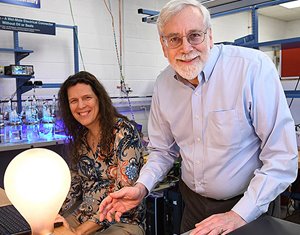 Staff engineer Jim Windgassen and Northrop Grumman Fellow Harvey Hack were hard at work on improving the ability of UUVs to recharge their batteries when they discovered the missing piece of this puzzle: the inherent nature of niobium.
The connector owes its magic to an oft ignored element on the periodic table: Niobium, atomic number 41, named after Niobe, of Greek mythology. The metal is electrically conductive and has a few other tricks up its sleeve. One of them lodged itself into the memory banks of Harvey Hack, a Northrup Grumman fellow, years ago.

“Somewhere I came across the fact that niobium develops a passive film that has the highest breakdown voltage,” Hack said. In other words, when submerged in water, the metal grows its own thin but perfectly insulating coating.

That film is only a few molecules thick—150 nanometers, roughly—and it forms in milliseconds when in contact with water, complexly insulating the niobium. What’s more, when niobium rubs against niobium, it scrapes away the film, allowing a current to flow between the two parts. It was the perfect material for a connector.

Check Out More Like This: How to Choose Power Adapter IO Plugs

When Hack’s colleague, Jim Windgassen, a senior staff systems engineer at the company, was developing methods for recharging underwater vehicles, he asked Hack if he knew of any potentially useful materials. Hack knew just what to suggest.

It was not long before Windgassen had a working prototype using niobium, and it was one that astounded his colleagues. He would submerge a live wire, powered with 48 volts, in an aquarium, and then touch the ends with his fingers incurring no injury to himself. In fact, at trade shows skeptics wouldn’t believe what they were seeing till a volt meter proved the wire was hot.

“That’s always fun, when you get a doubter,” said Windgassen.

Now that that prototype has become a viable product, the doubters have fallen away. Thanks to its self-insulating ability, the connectors require little force to join them, continue to work when they’re loose, and at any depth. They can even be mated when the power is on.

The element is also incredibly durable (it’s often added to steel to make it stronger). When the connectors scrape away the insulating film to mate, little is lost. “You’re only removing a couple of atom layers. You can do that for year after year and not lose a lot of material,” said Windgassen.

Niobium isn’t cheap; currently it’s about nine times the cost of copper. But where other connector solutions have to work hard to keep out water, the NiobiCon Wet-Mate Electrical Connector, as they call it, needs no shell, keeping it well in the realm of affordability.

“When you look at other underwater designs and the oil, bladder seals, and gaskets they use—then the cost is negligible,” said Keith Johanns, Northrop Grumman’s intellectual property manager.

The charging of underwater vehicles is only one possible use for a connector made with niobium.

In addition to its conductive and insulating properties, niobium is completely nontoxic, making it ideal for biomedical applications.

The team, whose efforts won the Licensing Executive Society International’s Innovation Award for 2022, is also currently working on using the element to create a connector for fiber-optic cables, as well as extending the range of voltages the connectors can handle. NiobiCon is set to be an integral part of the Mission Unlimited charging station for unmanned underwater vehicles, which will be a docking point for the exchange of power and data.

They’ve successfully charged a remotely operated vehicle in a pool and have contracted with the Monterey Bay Aquarium Research Institute to develop a system to charge their fleet of autonomous underwater vehicles underwater.

And maybe someday, our children will be able to safely charge their toys in the bathtub.