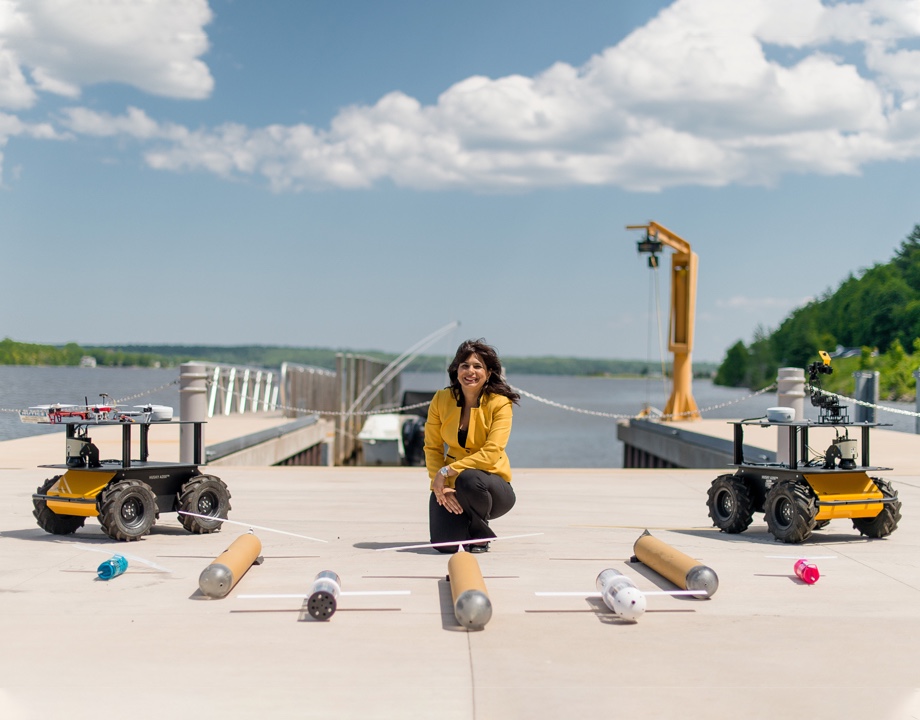 Navigational Service Robotics
Whether on land, sea, or air, mobile robots face the big challenge of energy management, specifically battery life and charging to optimize range and endurance. It’s a particular problem for autonomous underwater vehicles (AUVs), which lose radio and GPS communications when underwater. One solution has been to deploy a number of charging stations to which a robot can return periodically to recharge and upload/download data, but that is limited by the static nature of the charging stations; the more time and energy a robot must spend traveling to and from a station is less spent on the mission itself.

Nina Mahmoudian, an associate professor of mechanical engineering at Purdue University, and her team at Purdue have overcome those limitations. 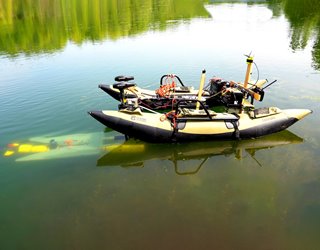 A yellow underwater robot (left) finds its way to a mobile docking station to recharge and upload data before continuing a task. Image: Purdue University photo/Jared Pike
“Recharging systems are widely available for aerial systems and ground systems, but not that much for undersea operation,” she said. “We’ve developed a new mobile underwater docking system that can be deployed in a fixed setting as a fixed charging station or as a mobile. It can be installed on the back of a boat or autonomous surface vehicle to serve as a mobile charger.”

The team’s approach encompasses both a cross-domain optimization mission planning software for resource allocation, and a docking station and associated software for approach and homing in a marine environment. The system provides “mission planning and optimization metrics for finding trajectories of a working robot and charging robots together so that the working robots can fully cover the mission area while they are expending the least amount of energy.”


While the special difficulties of marine operations generally mean AUVs aren’t quite as autonomous as their aerial and ground-based cousins, the Purdue project hopes to change that. According to Mahmoudian the traditional method is that the human is always in the loop. You deploy one or two or even multiple vehicles, and there is a boat there with people supporting the mission. The vehicle completes the mission and then comes back for recharge and data transfer. With their approach, the team is hoping that the vehicle can continuously perform the mission without human intervention.

You May Also Like: Off-the-Shelf Brains for Self-Driving Robots 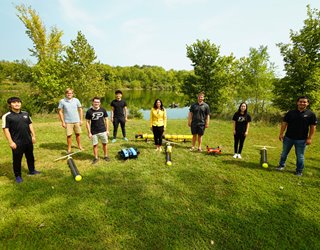 The team is conducting further tests to refine the algorithm with an eye toward eventual blue-water tests in ocean conditions. Image: Purdue University photo/Jared Pike
AUVs are commonly sent on pre-programmed missions underwater, then return to the surface and send out a signal calling for retrieval and recovery by humans in a boat. In this system, however, the robots perform their jobs and return to a charging station to dock and recharge. The charging stations are also mobile and monitor the positions of all the working robots, and can plan and update their trajectories so that the vehicles can rendezvous and dock with the best efficiency and time savings. Underwater, the robots and docking stations communicate acoustically, and each station is equipped with a beacon for the final homing and docking procedure.

Importantly, the system is capable of responding and adapting to unexpected changes. “We have the capability of automatically planning, meaning that even if a human is not there, when the vehicles get to the docking station they do a check, are all vehicles available? And if it detects failure, then it recalculates and replans, and then sends that plan to all vehicles. This way, our system is adaptable to changes in the environment, to failure, to disturbances.”


The algorithm and docking stations are also being designed for compatibility with commercially available AUV systems. “We dont like to have different gas stations for different type of vehicles, we all go to one gas station,” said Mahmoudian. “Our approach is to have something that’s adaptable, portable, and which can serve a variety of vehicles. To that end, we’re also working on adapters and payloads that can be added to available commercial platforms so they can take advantage of this docking station for data transfer and for recharging.”

The system has performed well in both computer simulations and real-world underwater tests, and Mahmoudian’s team is conducting further tests to refine the algorithm with an eye toward eventual blue-water tests in ocean conditions. “In the long run we are hoping to actually have multiple chargers with multiple underwater vehicles together to basically implement the algorithm on multiple vehicle operation.”

Ultimately, the platform may operate everywhere from the tropics to the Arctic and someday, even beyond Earth. The team has published a paper on using the system to explore the ice-covered oceans of Saturn’s moon Titan. “The design is adaptable, portable, and foldable, which makes it a great candidate for space exploration,” she added.

Mark Wolverton is a science writer based in Philadelphia, Pa.