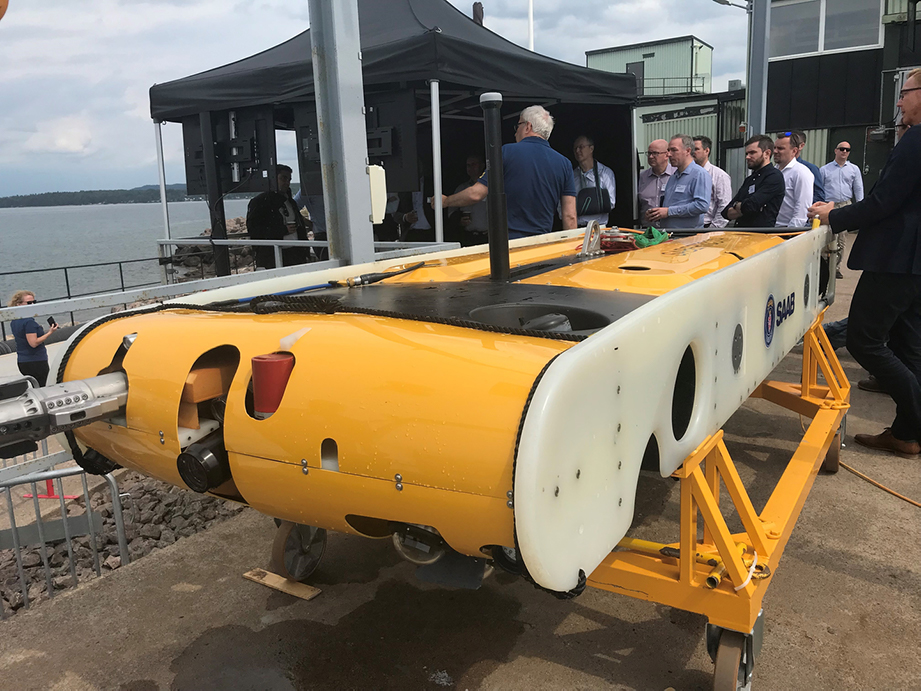 Navigational Service Robotics
Submersible robotics have long been used to explore the underwater environment, especially for energy exploration and production and the inspection of major infrastructure, such as bridges, dams, pipelines, oil rigs, military applications, and communication structures. Underwater infrastructure is a vital part of national security that is commonly at risk, especially those elements that are exposed to harsh and corrosive ocean environments.


A variety of underwater robots have emerged over the last few decades to meet these challenging underwater tasks:


The dominant trend in underwater robotics is toward autonomy. “Instead of remote control by a human or preprogrammed trajectories, we are seeing more built-in autonomy that can react to the specific conditions on-site,” said Michael Kaess, associate research professor in robotics at Carnegie Mellon University.

AUVs are increasingly equipped with new abilities, such as on-board feature detection, mapping, and autonomous adaptation to sensed features. “Adaptation is still not standard, but it is easier to integrate than it was ten years ago,” said Erin Fischell, assistant scientist in Applied Ocean Physics and Engineering at Woods Hole Oceanographic Institution.

Perhaps the most exciting advancement is the development of autonomous gateways and docks for the exchange of data, a big step toward building resident autonomous systems on the seafloor, in water as deep as 3,000 meters to 4,000 meters.

A seafloor resident ROV or AUV system would remain on the seafloor and be controlled from a shore base. In 2019, Saab Seaeye, an underwater robotics company, successfully docked an AUV to a subsea docking station to recharge its batteries and download data. Underwater charging was completed with inductive connectors instead of pins—another advancement.

Essential for a seafloor resident system is the development of optic modems and high-frequency acoustics modems that “provide higher-bandwidth communications links over tens to hundreds of meters so that direct connection is not required,” said Fischell.

New sensing technologies are also being developed to improve situational awareness when underwater robots are working in close proximity to subsea structures. “One of the most impressive advances contributing to situational awareness is underwater lidar, which requires higher-power lasers,” stated Brendan Englot, associate professor of mechanical engineering at the Stevens Institute of Technology. “Over the last few years, this has become more practical and capable of being integrated into AUVs, allowing them to build high-precision maps that exceed the capabilities of the best acoustic sensors.”

Underwater robotics is expanding rapidly and the growth of offshore wind farms will greatly increase the need for monitoring via seafloor resident systems. Steel structures and supports, cables, and anchoring systems must all be closely monitored for corrosion.

Kaess is working on underwater localization and mapping using a variety of onboard sensors. “This reduces the need to periodically resurface for GPS fixes or to deploy traditional long baseline or utra-short baseline acoustic localization infrastructure,” he said.

“Swarming” is a new concept for mapping that many think will be faster, more efficient, and less costly for underwater mapping projects. Instead of using a single, more expensive underwater robot to cover an area of the ocean, hundreds or even thousands of smaller, lower-cost robots can be synchronized to cover the same area in much less time.

“Creating swarms of underwater vehicles will require three key technologies: inexpensive vehicles, inexpensive sensors, and a navigation/command and control scheme that allows vehicles to remain together in an area while collecting data,” said Fischell.

Englot’s research has focused on how to improve situational awareness and decision-making for AUVs operating in close proximity to underwater structures, which they may never have encountered before. “We typically work with sonar-equipped underwater robots, since this provides us with a capable sensor in a small package that can perceive the environment at long ranges, regardless of the water clarity,” he said. “My students and I have developed new techniques for performing dense 3D mapping with imaging sonar, and new planning algorithms that manage an underwater robot’s localization uncertainty while mapping and exploring unknown environments or infrastructure.”

Other technologies in the pipeline that might revolutionize how AUVs operate include optic and high-frequency acoustic modems (for short-range high-bandwidth communications) and situational awareness/command and control software packages. Artificial intelligence (AI) will also play a larger role in underwater robotics, where AI might actually take over the role of the ROV pilot, who tele-operates an underwater robot and evaluates its imagery.

“Along these lines, there is likely to be continued momentum toward untethered vehicles and more intelligent and capable manipulation and physical intervention performed by these vehicles,” said Englot. “The pinnacle would be reaching a point where the construction and/or decommissioning of subsea structures could be performed completely by a team of cooperating AUVs.”