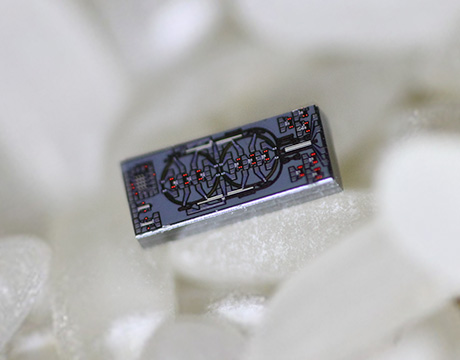 A more stable, accurate and powerful gyroscope – no larger than a grain of rice – could soon make its way into wearable devices, nano platforms, and other applications.

Gyroscopes enable vehicles, aircraft, robots, wearable, and other electronic devices to determine location in three-dimensional space. In most cases, the data is generated by microelectromechanical sensors (MEMS) that measure differences in the forces that act on oscillating masses moving in opposite directions. But those gyroscopes have several limitations, including their sensitivity to such factors as vibration and temperature.

To counter this, optical gyroscopes were developed and made with no moving parts. Most of them are smaller and more accurate than MEMS gyroscopes, making them good candidates for miniaturization and nanophotonic platforms. But even the smallest high-performance optical gyroscopes available today are too large for many portable applications. Another drawback is their signal-to-noise ratio, which is generally limited by thermal fluctuations, component drift, and fabrication mismatch. Due to those drawbacks and others, integrated nanophotonic optical gyroscopes have yet to be developed. That could change.

Researchers at the California Institute of Technology have taken a big step toward making those tiny gyroscopes a reality. Led byelectrical and medical engineering professor Ali Hajimiri, the team developed a proof-of-concept optical gyroscope that is 500 times smaller than current state-of-the-art devices, or about the size of a grain of rice. It is also vastly superior in precision, being able to detect “phase shifts” that are 30 times smaller than what current systems can detect, enhancing its performance by one to two orders of magnitude.

Optical gyroscopes measure the rate of rotation by detecting differences in two paths of light—a phenomenon known as the Sagnac effect. A beam of light is split into twin beams which travel in opposite directions along a circular pathway and meet at the same light detector. Because light travels at a constant speed, rotation causes one of the beams to arrive at the detector before the other. This phase shift is then used to calculate orientation.

Hajimiri’s all-integrated, nanophotonic optical gyroscope achieves its improvements through "reciprocal sensitivity enhancement." In this technique, reciprocal means that both beams of light are affected the same way. In Hajimiri’s gyroscope, light moves through miniaturized optical waveguides, which are small conduits –about 200 nanometers tall, or about three times the width of a human hair - that carry light, acting in the same way as wires that carry electricity. Imperfections in the optical path that could affect the light beams - such as thermal fluctuations, light scattering, and other interference – affect both beams in the same way.

Hajimiri's team found a way to extract reciprocal noise while leaving signals from the Sagnac effect in place. That enhances the gyroscope’s reciprocal sensitivity, which improves the signal-to-noise ratio. Those improvements enable the integration of the gyroscope onto such a small chip.

The lab built the system using silicon nanophotonics, “which is an ideal platform for implementing optical gyroscopes on the microscale due to its reliability and compatibility with current mass production techniques,” Hajimiri said. It also provides the capability of integrating nanophotonic and electrical components onto a single substrate, which helps with commercialization and controlling costs.

The optical gyroscope has no moving parts, making it an extremely robust system. System dimensions are 2 by 1 by 2 millimeters. The build process deploys lithography to stack and pattern several ultra-thin layers of silicon and silicon-dioxide.

“The only thing that moves inside the gyroscope are photons that travel at the speed of light in a pair of very small loops hundreds of billions of times every second,” Hajimiri said. “Extremely small changes in path length due to rotation can be measured.”

The greatest challenge in designing the system was accurate detection of variations in the optical path due to rotation, while minimizing sensitivity to thermal fluctuations and drifts.

“We did this by employing a technique we refer to as reciprocal sensitivity enhancement, where the light travels in two opposite orientations [clockwise and counterclockwise] in two loops for half of the cycle, and then travels in the opposite direction for the other half,” Hajimiri said. “This way the effect of non-idealities in the system can be cancelled, while the signal is amplified.”

Tests show theproof-of-concept device is capable of detecting phase shifts 30 times smaller than state of-the-art miniature fiber-optic gyroscopes, despite being 500 times smaller in size. “Thus, our approach is capable of enhancing the performance of optical gyroscopes by one to two orders of magnitude,” Hajimiri said.

The team is already working to develop the next-generation of its current prototype.

“The level of interest we have received so far is very high,” Hajimiri said. “Many parties have shown interest in working with us toward further development of this technology.”

More Exclusive Content from ASME.org:
Global Talent Makes American Industry Stronger
Polymer Composite Can Regulate Its Own Temperature
How Engineers Can Resolve Conflict and Save Their Business